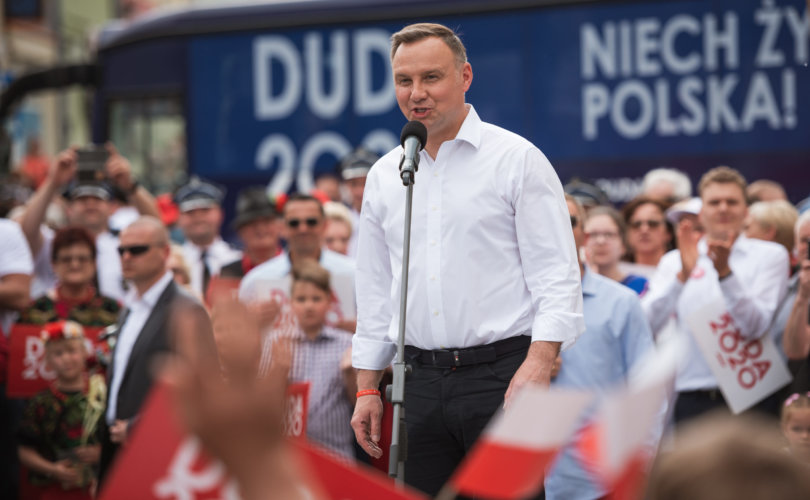 WARSAW, Poland, June 19, 2020 (LifeSiteNews) – Polish President Andrzej Duda has called homosexuality and transgenderism an ideology that is “is even more destructive to the human being” than communism. Poland had been a communist dictatorship after World War II until 1989.

“That was Bolshevism. It was the ideologizing of children. Today, there are also attempts to push an ideology on us and our children, but different. It’s totally new, but it is also neo-Bolshevism,” he explained.

Following numerous negative articles by international media outlets, Duda sent out several tweets in English to Reuters, The New York Times, the Associated Press, The Guardian, and the Financial Times, clarifying his position.

“Yet again, as part of dirty political fight, my words are put out of context. I truly believe in diversity and equality,” Duda said. “At the same time, beliefs of any minority cannot be imposed on a majority under the false pretense of tolerance. In our times, truth has become a scared little creature that hides from much stronger correctness.”

“I believe in the world where truths, such as MeToo, can have a safe platform. Where we can speak our mind, where words are not twisted. I believe in tolerance to any views, so please stop distributing fake news,” he added.

As part of his campaign to be elected president for a second term, Duda has pledged to protect children from the agenda of homosexuality and gender ideology.

His campaign platform includes a “Family Card” listing his many pro-family policies. It includes a section titled “Protection of children from LGBT ideology.”

That section promises “an end to ideological LGBT propaganda in public institutions” and “the right of parents to decide in what spirit to shape their children.” It includes a belief that “parents above all are responsible for the sexual education of their children” and expresses support for “the parents’ decisive influence on the form and substance of optional classes in schools.”

The “Family Card” also offers “help for families who want to homeschool.”

In other sections, the “Family Card” pledges financial support for families, help for senior citizens, and help for single parents.

According to the president, the family is crucial to Poland, and the traditional definition of marriage will prevail.

“The family deserves special support from the state,” he pointed out. “The family protects and builds society.”

“Our identity has helped us to weather the toughest times in childhood,” Duda added. “The Polish family has preserved our values. The family is a special value, which demands special protection from the state … Marriage is a relationship between women and men, and so it will remain.”

Duda, a practicing Catholic, began his presidency in 2015 by making a pilgrimage to Our Lady of Częstochowa, who is venerated as Queen and Protectress of Poland.

For the feast of Corpus Christi in 2015, he was seen rescuing a consecrated host that had dropped to the ground during an outdoor Mass.

Catholics believe that after the words of consecration are prayed during Mass, the bread is changed substantially into the whole Christ – body, blood, soul, and divinity. This conviction explains the utmost care given by the Church to the Eucharist.

Duda is scheduled to meet with U.S. President Donald Trump in the White House next Wednesday, just a few days before the presidential election in Poland.