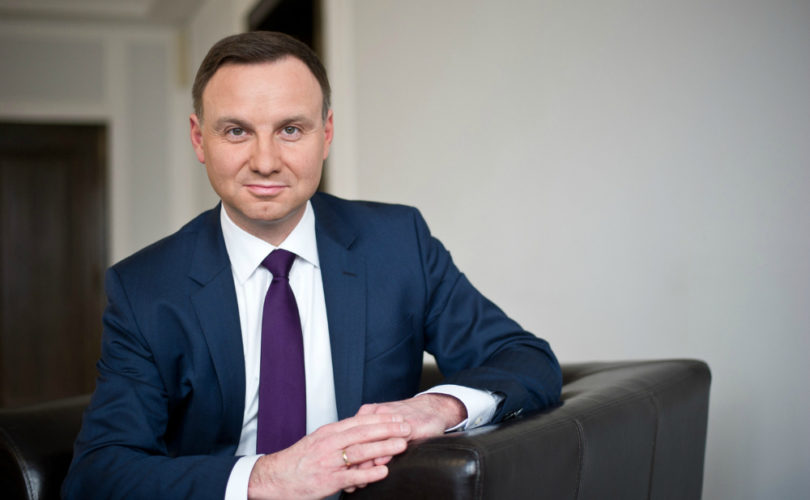 WARSAW, Poland, October 26, 2016 (LifeSiteNews) — After Andrzej Duda of the Law and Justice Party won the presidential election in May 2015 by more than half a million votes against incumbent Bronisław Komorowski from the Civic Platform, there was optimism among pro-life conservatives that the devout Catholic would press for changes in the country’s abortion laws.

The young and largely unknown Duda beat a well-known president favored by the establishment and the mainstream media. Komorowski sympathized with feminist goals and discouraged pro-life initiatives.

However, Duda so far does not seem to be a strong force for moral change. And certainly he is not acting quickly.

On Monday, in an interview with the weekly Wsieci, Duda said he is against punishing women in any form and so it was good that the Sejm, the Polish Parliament's lower house, rejected the recent bill to ban abortions that allowed for punishing women.

“At the same time, I think that [unborn] babies with Down syndrome or other disabilities should definitely be protected”, he said, adding “I have absolutely no doubts about that.”

The president also mentioned that social solutions are needed and that the Minister of Labor and Social Policy is working on related bills. Prime Minister Beata Szydło announced several bills aiming to help families with special needs children and women with crisis pregnancies the day she voted to reject the abortion ban.

The Right to Life Foundation, which spearheaded the abortion ban, drafted a petition “Mr. President, Save the Children,” asking him to initiate a bill protecting the unborn in Poland. About 4,000 people have signed it thus far.

Duda’s inaction is a strong contrast to former U.S. President George W. Bush, who on his first day in office signed a ban on all U.S. funding of international abortion-rights groups. In January 2003, Bush signed the “Sanctity of Life” bill and two months later signed a ban on partial-birth abortion.

As president, Duda has constitutionally-defined power to propose a new law. Additionally, he is a lawyer with a Ph.D from the Administrative Law Department of Jagiellonian University in Krakow and served as undersecretary of state in the Ministry of Justice. Thus, he certainly seems capable of bringing justice for the unborn in Poland.

Duda knows that Polish abortion laws fail to protect the innocent and vulnerable. Even though abortion is illegal except in certain circumstances, those “circumstances” allow for barbaric acts.

Abortion is legal when a doctor believes that the baby has a severe and irreversible handicap or an incurable and life-threatening disease. In such situations, the procedure is legal until the baby is viable, which means late-term abortions for a 6-month-old unborn baby. When the woman's life or health is endangered, there are no legal limits as to the time when it can be performed. When the pregnancy is a result of a criminal act, abortion is permitted until the 12th week.

Duda’s faith doesn’t appear to be in question. He takes part in many televised religious ceremonies and Masses. During an open air Mass, he was filmed and photographed gently lifting the Host from the ground after it had been carried away by the wind. The acclaimed picture showing the president saving the Host and then bringing Jesus to Archbishop Kazimierz Nycz was considered prophetic.

During a previous interview, the president mentioned a late-term abortion procedure “in the Warsaw hospital where a baby survived an abortion and was left to die.” Back then, he said, “This shows that the law is not perfect. I think everybody understands that this event should never have taken place.”

Six months have passed and he has taken no action. His party, Law and Justice (PiS), won the election on a “good change” platform. And it has been 14 months since the Duda took office. Today, he only offers words, but without full support for protection of the unborn.