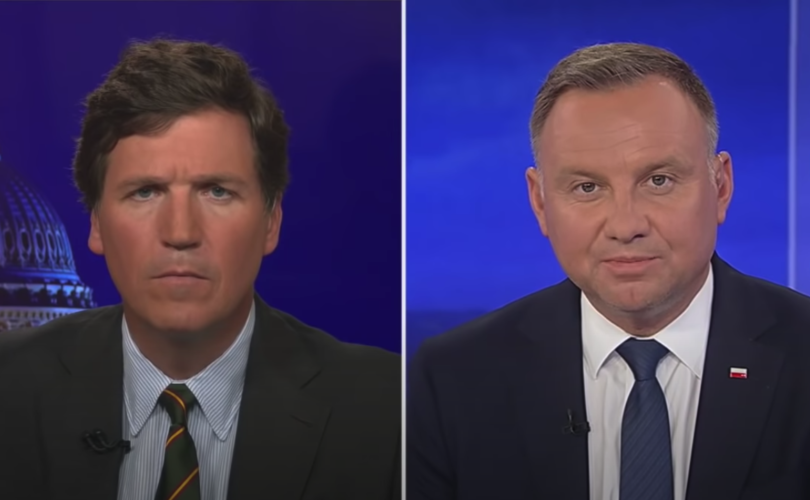 “The [Polish] constitution stipulates that marriage, it says ‘a union of a man and woman, and family’ are protected by the government in a special way,” Polish president Andrzej Duda told Fox News’ Tucker Carlson.

“So, for the first time since 1989, we have embarked on a very resolute and vast pro-family action,” he added.

Specifying the pro-family policies he has enacted, Duda told Carlson that when he ran for the president in 2015, he pledged to his people that he would financially compensate parents on a monthly basis in an effort to alleviate the monetary burden of raising children. Thus far, he has followed through on his pledge.

“We decided that starting from the second child in a family, parents of every child would monthly receive 500 zlotys, some 130 [US] dollars,” he stated.

“This program was revolutionized in Poland, I think nobody can imagine not to have the ‘500 plus’ program in Poland, that was the best thing, definitely the best social program we’ve been able to introduce,” continued the president.

Poland, like many Western countries, has suffered from extremely low birthrates since the advent and proliferation of birth control. However, since 2017, the birthrate in Poland has increased by 3.17 percent, an indication to many that the new pro-family incentives have been working.

Further, in 2010, half of Poland’s births were women having their first child, whereas by 2017, that number fell to 43 percent, suggesting that the social program has encouraged a fair amount of families with one child to have more children.

— Article continues below Petition —
PETITION: Stand with Hungary for protecting children from LGBT propaganda
Show Petition Text
44707 have signed the petition.
Let's get to 45000!
Thank you for signing this petition!
Add your signature:
Show Petition Text

“To me, a politician, speaking openly, I consider myself to be rather conservative,” said Duda. “I’ve always been frank about my views: I’m a Christian, I’m a practicing Christian, I pray, I’m not ashamed of that whatsoever,” he confessed.

Duda is a practicing Catholic and on many occasions has been seen receiving the Sacrament of the Eucharist on the tongue while kneeling, the traditional and often considered the most reverent method of reception.

“To me, the value of family is priceless, I do support families,” he said. “I’m pro-life, I defend life, I believe that life is sacred.”

“I believe [life] should be guarded, and families have to be supported as strong as they can because family is the foundation of every nation,” he expressed.

Duda concluded the brief interview by telling Carlson that Poland also offers an additional 300 zlotys (75 USD) to parents for each child they have starting a new school year, to help cover the costs of buying backpacks, pencils, and other items to aid in the child’s education.

Duda has advanced Catholic-friendly and pro-family policies in the past, though he has been criticized for compromising on the protection of babies with disabilities.

In 2016, Duda and his parliament officially voted Jesus Christ as the King of Poland.

“O Immortal King of Ages, Lord Jesus Christ, our God and Savior! In the Jubilee Year of the 1050th anniversary of Poland’s Baptism, in the Extraordinary Jubilee of Mercy, we Poles stand here before you [together with our authorities, clergy and laity] to acknowledge your reign, to submit ourselves to your law, to entrust and consecrate to you our Fatherland and our whole people,” reads Poland’s official Jubilee Act that formally announced Christ’s Kingship over the nation.

Poland, unlike many other countries, still reports quite a high rate of church attendance, particularly among young Catholics.

Recent data from 2020 shows that 80 percent of young Poles identify as Catholic, and 50 percent of them attend Mass weekly. For comparison, only 25 percent of all U.S. Catholics report weekly Mass attendance. In Canada, the number is as low as 5 percent.