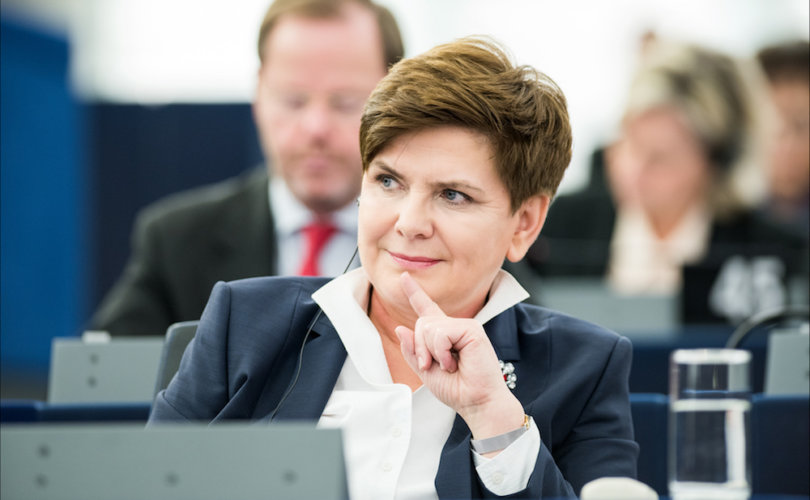 WARSAW, Poland, April 1, 2016 (LifeSiteNews) – Support is growing for a law that would ban abortion in Poland, with the Catholic Church and prominent Polish politicians showing support for the legislation.

On Wednesday, the Polish bishops published a letter to be read in churches on Sunday calling for a new abortion to fully protect the unborn. The direct reason for this public statement is a proposed law that will end up in Parliament soon after pro-life activists gather 100,000 signatures of support for the bill.

“If I had to make a prediction, I would say that the overwhelming majority, if not all, will vote for it.”

Now Prime Minister Beata Szydło has also signalled her support for the measure, calling the bishop’s letter a clear call for change.

“I think every [MP] will vote in line with his own conscience,” she told a Polish radio station. “At this stage I can say what my decision will be, at the moment I can not talk about the bill, because this bill does not yet exist. … As for my opinion, the opinion of Beata Szydło – yes, I support this initiative.”

Szydło, the third female prime minister of Poland, is a Catholic and a member of the conservative Law and Justice Party.

Pro-life activists can also count on the backing of another prominent figure in Polish politics, Jarosław Kaczyński, the leader of the Law and Justice Party. As pch24.com reported, Kaczyński said, “I am a Catholic and my position is evident here.”  While he repeated what Szydło pointed out about other party members voting differently, he added, “If I had to make a prediction, I would say that the overwhelming majority, if not all, will vote for it.”

Mariusz Dzierżawski from the Right to Life Foundation, the organization that first proposed the change to the current law, called Kaczyński’s statement “a good declaration.”

The Ordo Iuris Institute, a legal organization, actually wrote the bill proposed by the Foundation. “I hope that the politicians will present a united moral front,” said Jerzy Kwaśniewski, a lawyer from Ordo Iuris.  “If we want to reestablish order in Poland, we need to start with the most fundamental thing: the protection of human life.” He told LifeSiteNews that Polish society is highly conscious of the truth about abortion, a fact he attributes to “the shocking street exhibits showing abortion pictures” that the Right to Life Foundation has been showing all over Poland.

According to a Polish law dating from 1993, abortion is illegal except in three circumstances. First, when the woman's life or health is endangered. Second, when the pregnancy is a result of a criminal act. And finally, when a doctor believes the baby has a severe and irreversible handicap or an incurable and life-threatening disease.

The new law gives legal protection to all children from the moment of conception. This would make all abortions illegal in Poland. The bill specifically states that the doctor who causes an unborn child’s death trying to save a woman’s life will not be punished. The focus of the proposed law is not punishing women who do have abortions; in fact, it leaves that to the discretion of judges. Instead, it increases punishment for abortionists and people who harm pregnant women and force them to abort by ruse or threat. What’s more, it also discusses the state’s responsibility in helping parents of handicapped or special-needs children.