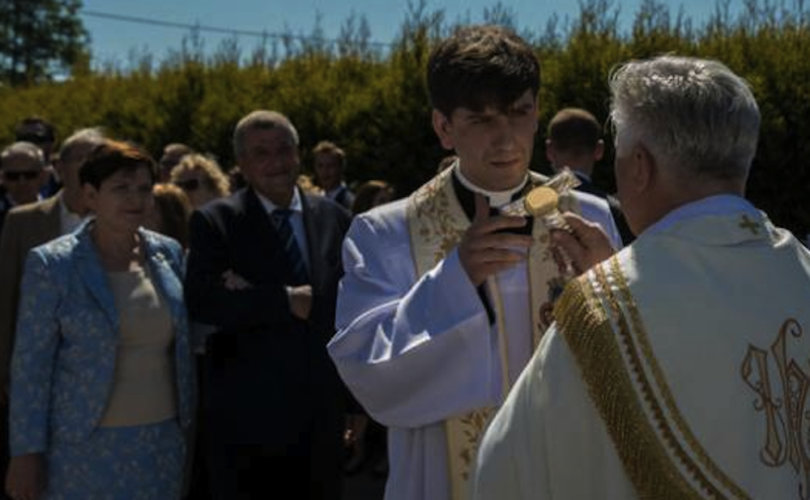 BIELSKO-BIAŁA, Poland, May 31, 2017 (LifeSiteNews) — The head of Poland’s government Beata Szydło told Gosc.pl that she is the only Prime Minister with a son who is a priest.

“I don’t see anything unusual about it,” she said.

Her older son, 25-year-old Tymoteusz Szydło, was one of 13 deacons ordained as priests last Saturday in the Cathedral of Saint Nicholas in Bielsko-Biała, in southern Poland. Among the faithful, there were family guests, including Prime Minister Szydło and her husband, Edward.

Bishop Roman Pindel commented on the occasion, “During my work as a head of the seminary, I have become convinced that 90 percent of the quality of a priest depends on his family.”

On Sunday, Father Szydło celebrated Mass at the parish of Our Lady of Częstochowa in Przecieszyn, located near Krakow, where he delivered his first sermon as a Catholic priest. He was baptized as a child at the same church. In 2011, just after the beatification of John Paul II, he entered the seminary.

Father Szydło told Gosc.pl, “I was connected with the Church, with the liturgical service from the childhood, and the path I chose was a natural continuation.”

He added that he did not consider any other path. “I simply entered the seminary.” The newly ordained priest recalled that his parents supported him, even though they were not overly enthusiastic.

“When he told us that he chose the seminary, I can’t deny that we had some concerns,” the Prime Minister admitted.“It’s not an easy path,” explaining that she asked him to consider graduating from college first and then going into the seminary.

However, Father Szydło said his parents “did not judge nor criticize.” He emphasized that his upbringing definitely helped him. His mother was a member of the Polish Parliament back then, but her job had nothing to do with choosing his calling.

Now, all he wants is to focus on the priesthood. He is not enthusiastic about the media attention and treats it with caution and reserve.

His mother seems more open to discussing the issue with the media.

“Now I know for sure that God chose Tymoteusz, and we have to support him with all our might in his beautiful and responsible path,” she said. Szydło also pointed out that thanks to him, the whole family has become closer to God.

Poland’s Prime Minister also revealed that last year Hungarian Prime Minister Viktor Orbán sent her son a letter when he was ordained a deacon. Orbán is the leader of the national conservative Fidesz party and a member of the Calvinist Hungarian Reformed Church. However, his wife, Anikó Lévai, is Roman Catholic.

The head of Polish government said that two weeks ago she spoke with Lévai, who was very moved and promised to pray for Tymoteusz. “Those are very nice and very important gestures,” Szydło concluded.

Poland’s Prime Minister has recently brought positive press to the country. Her recent speech in Parliament after the terrorist attack in Manchester became a media sensation after going viral thanks to Breitbart and its controversial former editor Milo Yiannopoulos. In her fiery speech, she declared, “We are not going to take part in the madness of the Brussels elite. We want to help people – not the political elites,” highlighting her government’s opposition to EU demands that Poland accept thousands of refugees.

Beata Szydło is vice chairman of the conservative Law and Justice Party, which often vocalizes its commitment to the Catholic Church’s teachings, especially on abortion and so-called same-sex “marriage.” However, her party killed an abortion ban and so far has seemed unwilling to take up the issue.