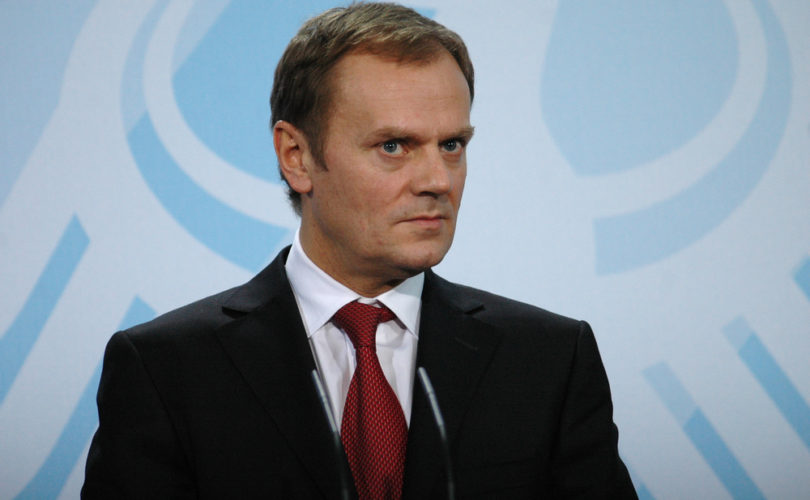 "Regardless of what his conscience is telling him, [a doctor] must carry out the law," Prime Minister Donald Tusk said June 10.Shutterstock

WARSAW, Poland – Poland's prime minister has declared that doctors’ opposition to abortion does not give them the right to refuse to kill a child in the womb, even under Poland's strict abortion rules.

“Regardless of what his conscience is telling him, [a doctor] must carry out the law,” Prime Minister Donald Tusk said in a June 10 statement, according to Polskie Radio.

Poland's laws only permit abortion if a woman's life or health is jeopardized by the continuation of a pregnancy, if the pregnancy is a result of a criminal act such as rape, or if the unborn child is seriously malformed. The abortion must be carried out in the first 25 weeks of the pregnancy.

According to Polish law on conscience rights, doctors may still decline such abortions, but they are obliged to refer patients elsewhere.

Tusk's statement came following the decision by obstetrician Bogdan Chazan, director of Holy Family Children's Hospital in Warsaw, to refuse to grant an abortion to a woman who alleged that the child she was carrying had severe brain damage.

The woman complained to the health ministry, which began a review of the case.

The prime minister said that if prosecutors decide a law has been broken then courts will have to rule on the issue.

Dr. Chazan is one of 3,000 Roman Catholic doctors, nurses, midwives, and medical students who have signed a “Doctors' Declaration of Faith” saying that they will conduct their professional duties according to their religious beliefs.

The declaration states the doctors “recognize the primacy of God's law over human law” and will work to “counter the imposed, anti-human ideologies of contemporary civilization.”

Dr. Wanda Półtawska, who initiated the “Declaration of Faith,” told Polskie Radio that she did so because some elements of modern medicine go against Catholic morals.

“Modern-day medicine represents evil,” said Półtawska. “The entire problem with abortion, artificial insemination, and finally, rejecting God as the Creator by performing in-vitro fertilization, poses a threat to the eternal life of all people who commit these deeds.”

Poland's bishops have endorsed the “Doctors' Declaration of Faith” and declared their support for Dr. Charzan and the other medical professionals who have signed the document.

“The aggression that has been directed against the doctors who were signatories of the declaration is not only incomprehensible, it is also unacceptable,” the bishops said in a statement issued following the June 11 plenary meeting of the Conference of the Polish Episcopate.

“It contradicts the constitutional principle of freedom of conscience and faith, and questions the inalienable right to conscientious objection in medical practice,” the bishops stated.

Moreover, Cardinal Gerhard Müller, prefect of the Congregation for the Doctrine of the Faith, attended the bishops’ plenary and voiced his support for Dr. Chazan.

“Developing theories today that the law of the state is above ethics and morals, or that it is a source of proper ethics, regardless of its wording, and that, for example, the state can compel a doctor – contrary to his conscience – to kill an unborn child, and to be threatened to be thrown out of work, are criminal and monstrous,” the cardinal said, according to Catholic journal Nasz Dziennik.

The cardinal noted that Dr. Chazan, citing a conflict of conscience, refused to abort the sick child.

“The doctor did not send the woman to another hospital,” Cardinal Müller pointed out, “but instead offered her and the child care during her pregnancy, childbirth and after childbirth, and also informed her of the availability of hospice care. For this Dr. Chazan was reported to the Commissioner of Professional Responsibility.”