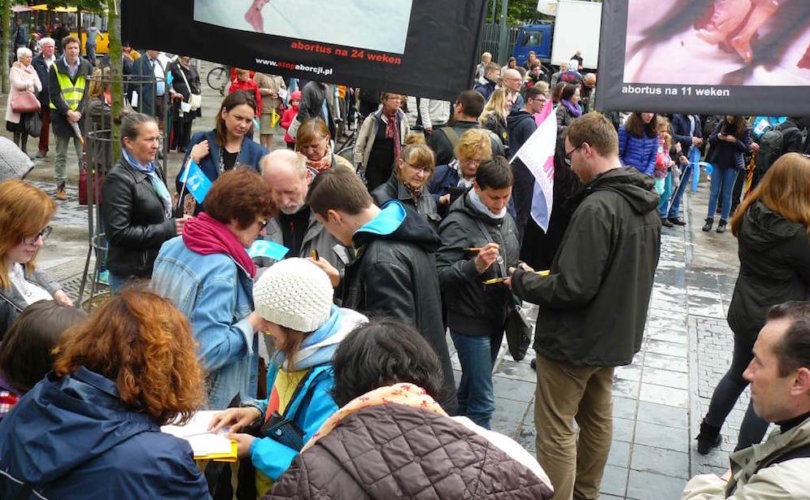 Polish pro-lifers are working hard to collect enough signatures to put their pro-life bill before the legislature.Right to Life Foundation

WARSAW, April 12, 2016 (LifeSiteNews) – While efforts to gather support for an anti-abortion bill have begun to heat up, the president and prominent politicians of Poland want to cool off the debate.

Recent reports in Polish and international media about the proposed abortion ban in Poland are confusing and misleading, particularly since the process involves a little known civic bill. According to Polish law, a group of citizens can propose a bill to the Parliament after collecting at least 100,000 signatures of support within three months. The current proposed ban came from a grass-roots movement, and, contrary to what has been claimed, was issued neither by the Catholic Church, nor by the government.

In recent years, pro-lifers have introduced citizens’ bills many times, gathering each time over 400,000 signatures, but the previous Parliament, ruled by the Civic Platform, was never sympathetic to these initiatives and rejected them all. Ironically, the party that has civic in its name, killed any kind of civic bills. The pro-abortion side also attempted to propose a citizens’ bill once, but ended up receiving at most 30,000 signatures (by their own admission), thus falling fall short of the necessary threshold.

This time, the Parliament is ruled by the pro-life party PiS, and there are pro-life supporters in other parties, namely Kukiz'15, and the Polish People's Party. A few independent MPs and even a few Civic Platform MPs may also offer support. However, PiS politicians seem to be reluctant to vote on the bill since they are under tremendous domestic pressure from the Civic Platform. There is also bad press generated abroad, mostly from Germany, but also from a handful of countries following Berlin’s lead. The democratically chosen Polish government has been portrayed as a threat to democracy and freedom, and PiS leader Jarosław Kaczyński as a dictator, even though he is neither president nor prime minister.

Kaczyński, the leader of the ruling PiS party, was asked by weekly Catholic Gość Niedzielny about his reaction to the Polish bishops’ letter advocating the abortion ban. Gosc.pl reports him saying, “I am a Catholic and will obey the call. But we need to accept a solution that would protect the life and health of mothers.”

It seems that Kaczyński may have read misinformation from the pro-abortion daily Gazeta Wyborcza, which suggested that doctors under the new law would not be able to save women’s lives because of the necessity to protect the unborn child. However, the bill specifically states that the doctor who causes an unborn child’s death trying to save a woman’s life will not be punished.

Kaczyński also called for an end to “talking rubbish about [Polish] dictatorship.” He admitted that signs of Poland’s ostracism abroad worry him.

German media and politicians such as Martin Schultz, current president of the European Parliament, have attacked PiS. Lately Guy Verhofstadt, the Belgian leader of the Group of the Alliance of Liberals and Democrats for Europe in the European Parliament also criticized the Polish government for the abortion ban, proposed by a group of Polish citizens.

Given the mounting international pressure, conservative politicians seem guarded in their comments. For instance, after Prime Minister Beata Szydło made headlines with her support for the bill, she backtracked somewhat, claiming that she had done so only as a private person.

Similarly, President Andrzej Duda, 44, cautiously chooses his words regarding the ban. When Polish daily Rzeczpospolita asked him if he would sign the bill banning abortion, he dodged the question saying that the Sejm (the lower house in Polish Parliament) is not working on any such project at this time. “The emotional discussion that has already started is premature,” he added. “If MPs initiate such a proposal or a citizen’s bill ends up in the Sejm, I hope a widely accepted solution will be worked out.”

The president’s reluctance may come in part because he does not know details of the project and because some misinformation is already circulating. Also, his wife, Agata Kornhauser-Duda, is under attack for remaining silent rather than answering feminists’ call to support their point of view on abortion.

“As Andrzej Duda, I have always said that I am for the protection of life,” the president said in the most recent interview. “But the question of protecting life concerns two people: the mother and the unborn child. I also have to remember that I am the president of Poland and that I should listen to different opinions, and take into account different ideas. That is why a wise and balanced approach is needed.”

When asked if the current law (called the abortion compromise allowing abortion in three circumstances) should be changed, he offered a glimpse of his position. “Sometimes dramatic situations happen, like the one in the Warsaw hospital where a baby survived an abortion and was left to die. This shows that the law is not perfect. I think everybody understands that this event should never have taken place.”

Bartosz Lewandowski, a lawyer from the Ordo Iuris Institute for Legal Culture, adds that it is not only the recent horror from a Warsaw hospital that proves Polish regulations are very harmful for babies. “There was a malpractice lawsuit involving the death of the unborn baby at nine-months gestation. This lawsuit proved that unborn babies are not well protected by Polish criminal law. I hope the new bill will change that for the better.”

The two interviews with Kaczyński and Duda came as activists from the Right to Life Foundation start the three month-process of gathering signatures. The bill will probably end up in Parliament in July and be voted on in September, at the earliest.

Professor Aleksander Stępkowski, a lawyer and vice-minister of Foreign Affairs specializing in human rights, presented LifeSiteNews with national and international perspectives on the bill. “The civic bill …goes exactly in-line with the UN Convention on the Rights of Children, which requires proper protection of the life of children both before and after birth,” Stępkowski explained. “From this perspective, the legislative proposal would enable the Polish government to insist on proper application of the Convention on Rights of Children as well as prevent some problematic interpretations with so-called abortion right for girls under the age of 18.”

Stępkowski, the former head of Ordo Iuris, also added the bill provided for public assistance for mothers in difficult situations. He said that this will enable Poland to better implement the Cairo Agenda from the 1994 International Conference on Population and Development.  “Its resulting Program of Action required UN member states to take every possible step to make abortion unnecessary.” He concluded that “this legislative proposal seems to better implement protection of human dignity and right to life as provided for in the Polish Constitution.”