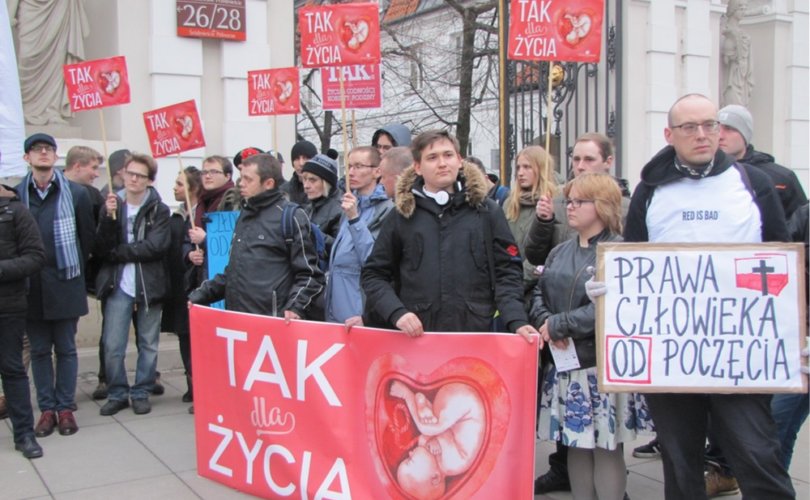 In one of a series of pro-abortion “Czarny Piątek” (Black Friday) protests, thousands of black-clad women and men filled Poznań’s Adam Mickiewicz Square on Friday to protest the Zatrzymaj Aborcję” (“Stop Abortion”) bill. If passed, the bill will remove the provision in Poland’s abortion law allowing the destruction of the unborn for reasons of their illness or disability.

The next day, on Poland’s “National Day of Life”, thousands of pro-life witnesses held a march in Poznań and expressed support for the anti-eugenicist bill. So far 850,000 thousand Poles have shown their support for the bill in a write-in postcard campaign supported by the country’s Catholic bishops.

“We want to honor these signatures,” said Bogusław Kiernicki, one of the march’s organizers. He said that the march, dubbed “the White March” by the media, was not a reaction to the Black Friday protest but had been planned for weeks before.

Jacek Kotula of Poland’s Fundacja Pro-Życia (Right to Life Foundation) also denied that the Poznań march was held in reaction to the pro-abortion Black Friday protests. He told LifeSiteNews that the real “White March” was merely a spontaneous demonstration of pro-life Poles on Facebook.

A week ago feminists planned for themselves a black march on Friday. Pro-life people on the internet spontaneously wanted to respond, and they called this “the Marsz Biały” [White March], although it was really a counter-protest.” he explained.

In the days leading to Black Friday, Facebook was dotted with Poles on either side of the debate decorating their portraits with black or white borders.

Over 20,000 social media users told Facebook that they were interested in the virtual “White March”, and over 15,000 marked that they had attended.

“The media called the March in Poznań the “White March” just because there were black [i.e. pro-abortion] marches that day,” Kotula continued. “We [pro-lifers] organize big marches two or three weeks beforehand and a few thousand people don’t come to a march with without organization and advertising.”

There were “Black Friday” demonstrations in other Polish cities last week, featuring obscene chants and posters proclaiming such slogans as  “My [genitals], my business” and “Holy vaginas.”

On Wednesday, members of the so-called Student Anti-Fascist Committee, a branch of Antifa, held a pro-abortion protest at the gates of the University of Warsaw and then set up outside the Bishop’s Palace in Warsaw. The left-wing activists chanted, “Ani Boga, ani pana, kuria jest okupowana”, meaning “Neither God nor you, the curia is occupied.”

The following Monday, pro-life students at the University held their own small rally at the gates. According to Akcja Studencka (“Student Action”), there were over 80 participants. They held banners reading “Students are for life, and not for death”, “Personhood from conception is a fact, not an opinion”, “All lives matter” and “We are at the side of every woman.”

On Facebook, Akcja Studencka condemned the behavior of the Anti-Fascist Committee on Friday and criticized the involvement of the University’s own Institute of Polish Culture in allowing the pro-abortion students space to make their posters.

The Catholic hierarchy was a target in the popular tourist destination of Krakow as well. On Friday between 200 and 300 pro-abortion demonstrators laid siege to the archdiocesan offices on Franciszkański St, shouting anti-clerical slogans.

Poland’s pro-abortion “Black Friday” movement is funded by foreign charities and encouraged by universities whose faculties remained far-left after the collapse of Communism in 1989. The vast majority of Poles, 86%, are Roman Catholics, and in stark contrast to Catholics in the rest of Europe, 40% – 45% still attend church services every week.

According to Jacek Kotula, there will be over 200 pro-life marches held throughout Poland on June 10.