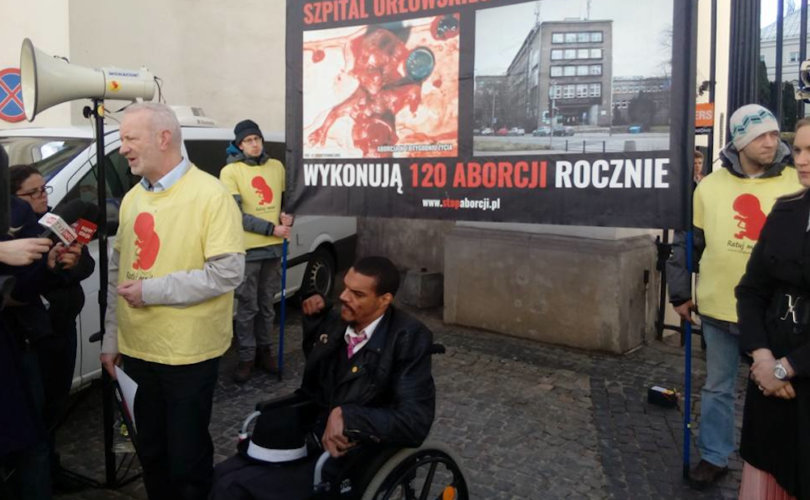 WARSAW, Poland, March 24, 2017 (LifeSiteNews) — Organizers launched a Hospitals without Abortionists campaign by reminding the Polish minister of health that there have been “1,500 victims of abortion” in the 500 days since he took office.

The national campaign started in front of the Ministry of Health building on the National Day of Life. Minister of Health Konstanty Radziwiłł is part of the ruling Law and Justice Party government that took office in 2015.

“Nobody can remove this responsibility except him. Only he can do this by opposing the murderous practices,” said Mariusz Dzierżawski of the Right to Life Foundation, which organized a press conference that was attended by actress Dominika Figurska and Nigerian-Polish crusader for life Bawer Aondo Akaa.

As Jan Bodakowski of wolnosc24.pl reported, the briefing started a bit late because three protesters were yelling “Freedom, equality, and abortion on demand!” through loudspeakers. One wore a pin with an image of Lenin, Bodakowski noticed.

During the press conference, Dzierżawski explained that since Law and Justice took power “every single day abortionists kill three children in public hospitals.” The Right to Life Foundation had drafted a proposal to ban all abortions that the party killed in 2016.

“These are horrible statistics and the responsibility for the killings in hospitals goes to the politicians,” Dzierżawski said, adding that “they had a chance to change ‘the murderous law’ but chose to maintain it. They rejected life and chose death.”

In a letter to Radziwiłł, the Right to Life Foundation cited a lack of significant changes in health policy. They specifically mentioned in-vitro fertilization, which allows “the production of babies in the laboratory and treating ‘defective’ people as trash,” abortifacient pills (ellaOne), and surgical abortions in public hospitals.

The pro-lifers plan to publicize statistics of unborn killed in Polish hospitals. Kinga Małecka-Prybyło of the Right to Life Foundation called Warsaw Orłowski Hospital, where 120 unborn were killed last year, “the biggest slaughterhouse.” The hospital was followed by one in Ruda Śląska and the Institute of Mother and Child in Warsaw, where 98 and 44 unborn were killed, respectively.

The organizers vowed that regular pickets of hospitals with gynecological wards will soon follow in several dozen cities. It is “to remind the doctors that abortion means killing the unborn.” The pro-lifers believe picketing is an effective tool in fighting abortion to inform the public and awaken the conscience of the gynecologists.

The case of the once-infamous Specialist Hospital Pro-Familia in Rzeszów shows that such protests can be effective. The hospital has been a target of numerous protests since 2014 and even responded by filing civil and criminal lawsuits against the Right to Life Foundation. However, in 2016, it finally stopped performing abortions when all the gynecologists working there signed a conscience clause.

Polish pro-lifers hope to duplicate this success in the city of Gliwice. Anna Kiljan of the Right to Life Foundation told LifeSiteNews that a hospital there performed 11 abortions in 2015 and became a target of pickets. In 2016, there were no abortions there, but “they did not announce any change, unlike the Pro-Familia, that they had stopped killing the unborn,” Kiljan said.

Besides the pickets, organizers plan to place billboards on buildings directly in front of the hospitals “to constantly remind the public about the murders committed in a given hospital.” When billboards are not possible, “we will park cars with identical information,” they said.

The primary goal of the campaign is to stop “the hospital murders,” the pro-lifers said. According to Polish law, abortion is illegal except in certain circumstances. The first exception is when a doctor believes that the baby has a severe and irreversible handicap or an incurable and life-threatening disease. In such situations, the procedure is allowed until the baby is viable, which means late-term abortions for a 6-month-old unborn baby. The second is when the woman's life or health is endangered. There are no legal limits as to the time when it can be performed. The third is when the pregnancy is a result of a criminal act. In those cases, abortion is permitted until the 12th week.