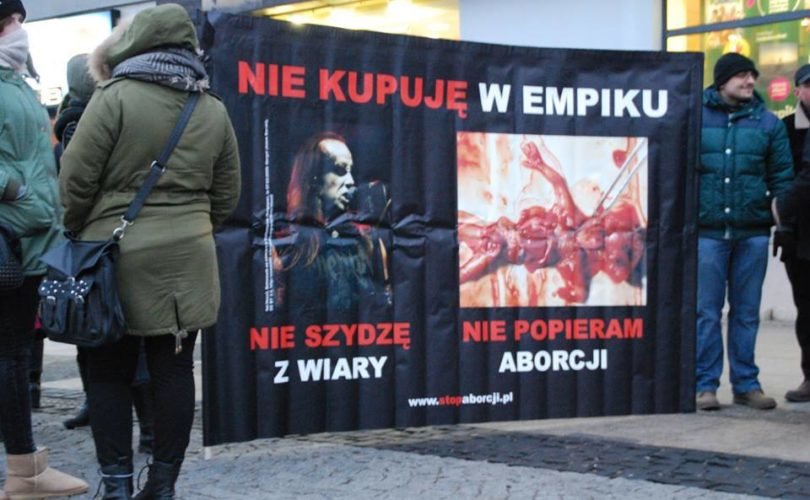 One of the pickets in Białystok. The sign reads: “I am not shopping at Empik, I am not mocking faith, and I am not promoting abortion."The Right to Life Foundation

The slogan for retail giant Empik claims the company “inspires everybody differently.” The ads inspired one pro-life group to boycott its stores.

Polish pro-lifers organized a boycott of Empik, whose 200 stores sell books, magazines, DVDs, video games and other products. Empik’s Christmas ad campaign seems a better fit for Halloween, featuring a famous Satanist and an author who has boasted of her own abortions.

Empik’s controversial campaign consisted of TV spots and posters with famous entertainers advertising various Christmas gifts. Among the four celebrities are Nergal, leader of the metal group Behemoth, and author Maria Czubaszek. The choice has caused quite a stir. Initially, opponents of this campaign did not know how to react, but one pro-life group initiated a boycott.

The reaction isn’t surprising since Nergal and Czubaszek are very controversial and provocative. Both of them had also promoted their works in Empik’s stores in person. They are both associated with the promotion of Satanism and abortion respectively, and their choice for a Christmas campaign was a risky one, to say the least.

Nergal is infamous for many shocking statements. He publicly discussed participating in group sex and his need for pornography. He once used the stage name Holocausto. Nergal is known for his Satanic lyrics and comments (“Satan open all the doors for us.”). His extreme music and the use of Satanic symbols led to protests and concert cancellations in Poland. His band was detained in, then deported from, Russia, and banned from Columbus, Ohio.

Another Empik celebrity, Maria Czubaszek, does not fit the Christmas season too well either. First, she is a declared “non-believer” who doesn’t celebrate holidays. Like Nergal, she does not like the Church, and she is a vocal proponent of euthanasia and abortion. In a recent interview with the Polish weekly “Wprost,” she said, “I hated holidays already as a child.” She added that she detests family, abhors pregnancy, and thinks children are “brats.”

The protest against Empik was organized by the famous Right to Life Foundation (Fundacja Pro-Prawo do życia). The Foundation wrote a letter asking Empik to stop using Nergal and Czubaszek during the Christmas season, but to no avail. The Foundation also created a Facebook fan page called “Świątecznych zakupów nie robię w Empiku” (“No Christmas Shopping at Empik”). The page displayed pictures with quotes by Nergal on religion—“I showed God the middle finger”—and Czubaszek on abortion—“God, how wonderful that I did that.” This Facebook page quickly amassed nearly 40,000 likes.

In response, Empik took action to block the page on facebook.pl for users in Poland. Empik spokesperson Monika Marianowicz confirmed for LifeSiteNews that Empik complained about the profile to Facebook. Empik claimed that the administrator of this page illegally used the name of the company (Empik), misleadingly associated it with graphic images, and made false allegations. The company also claimed that it damaged the reputation of the company. Consequently, Facebook blocked the page, an act which the pro-lifers consider censorship.

Commenting on the explanations from Empik, Mariusz Dzierżawski of the Right to Life Foundation told LifeSiteNews that it is impossible to write about Empik’s campaign without using the company’s name. He clarified that the Foundation did not use the logo of the company.

The pro-lifers are not intimidated, however. They are protesting with graphic anti-abortion signs in front of Empik’s stores in many Polish cities. Their signs read: “I am not shopping at Empik, I am not mocking faith, and I am not promoting abortion,” and show pictures of Nergal and an aborted baby. They also launched two different web pages, https://www.facebook.com/niekupujewempiku.v2 and https://www.niekupujewempiku.pl/, to bypass the block and promote the boycott among Poles living abroad.

The spokesperson for Empik stated that she was surprised by the escalation of the conflict. She said the choice of people for its campaign was meant to show the variety of tastes and interests of Empik customers. She also said that the campaign is totally ideologically neutral.

Kaja Godek from the Right to Life Foundation told LifeSiteNews, “Clearly Empik counted on protests which it could use to promote its brand. However, the scale of the protest outgrew the expectations of the marketing people, and the company panicked. All the former customers of Empik should be congratulated on the efficacy (of the protest).”  Godek also recalled that in 2011 Empik tried to sell a book promoting abortion written by two radical feminists in the teen section. The book was removed from this section after a wave of protests.

Commenting on Empik’s move to hire her, Czubaszek said in the “Wprost” interview:  “I don’t know if they made a mistake or if it was on purpose…but I don’t give a s**t one way or another.”