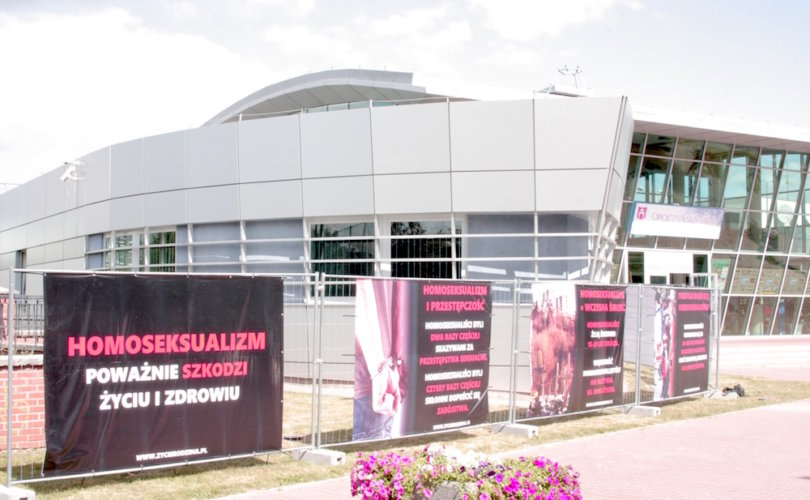 At the beginning of September a new pro-life, pro-family organization, Family and Life, put their “Stop Deviance” exhibit near a public swimming pool in the small town of Opoczno in south-central Poland. With the permission from the local authorities, the organizers hung large banners on a metal fence.

The banners bore simple messages such as, “Homosexuality is seriously harmful to life and health,” “Homosexuality = early death,” “On average homosexuals live 15-20 years less,” and “Most of them don’t live to be 65.” According to the organizers, the purpose of the exhibit was to show facts about the medical, psychological, and social dangers of homosexuality.

However, not everyone appreciated the information. At night, the posters were stolen. Kaja Godek, the head of Family and Life, told LifeSiteNews that there are no suspects, but the police are still searching for them, using forensics on cigarette butts left at the scene. She would like to replace the stolen banners but the authorities of Opoczno are under pressure from the homosexual lobby to prevent Godek from doing so. However, more than 20,000 people so far have signed a petition to the local government supporting her.

Godek explained that some of the data used on the posters came from the Colorado-based Family Research Institute (FRI). FRI is a non-profit scientific and educational organization that publishes empirical research on homosexuality, AIDS, sexual social policy, and other issues. The head of FRI, Dr. Paul Cameron, visited Poland several times in recent years. He became the subject of an unprecedented attack from the LGBTQ Association of Toruń, Poland, who called him “a fraud” and accused him of falsifying research. Dr. Cameron won a defamation case against the group in 2015. The group appealed the judgment.

The “Stop Deviance” exhibit also came under heavy attack. Katarzyna Lubnauer, a member of Parliament from the Nowoczesna (Modern) Party said during a press conference, “No to hate! No to scorn! No to lack of respect for another person!”

The vocal and very active Campaign Against Homophobia (CAH) as usual threatened a lawsuit. However, the organizers of the social campaign aren’t giving up. They have hung posters near the highway in Nasielsk, near Warsaw. Also, new exhibits were put up in Ełk, and Kielce where they are supposed to hang for two weeks.

Godek does not deny that the exhibit is very powerful. However, the organizers argue that this is how a contemporary debate on homosexuality should look, with “no hidden truths, and no facts buried.”

Godek told LifeSiteNews that the hysterical reaction of the left-wing Modern Party shows that there is “homo-censorship” in Poland. She explained that this censorship means, “There are areas in which scientific research is not needed.” Godek concluded that nowadays “ideology, simply gender ideology, with promotion of homosexuality has taken the place of science.”

She said that when we fight against drunk driving, we show people crashed in cars. “The same is true for anti-drug and anti-smoking campaigns in which horrible pictures are shown”, Godek pointed out. “We based our campaign on the anti-smoking one since homosexuality, like smoking, is seriously harmful to life and health.”