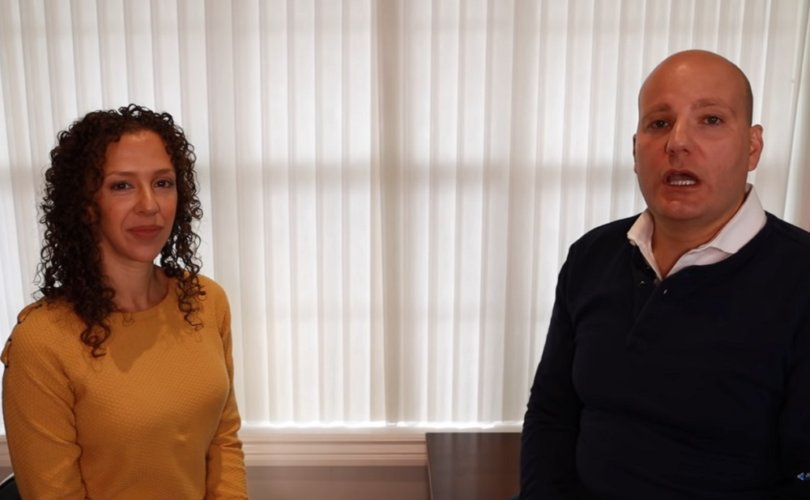 February 18, 2021 (LifeSiteNews) – Maverick Cambridge MPP Belinda Karahalios was ousted from Ontario’s Progressive Conservative Caucus for voting against Bill 195, a bill that has allowed provincial Premier Doug Ford to extend emergency orders a month at a time without consulting the legislature, and now she and her husband have launched an alternative provincial political party that they say aims to be loyal to grassroots conservative voters.

The New Blue Party of Ontario is officially registered as a party by Elections Ontario after gaining thousands of supporters. The party is inviting citizens to sign up online and is beginning to form riding associations throughout the province.

“The PC Party is beyond redemption,” Belinda’s husband, Jim Karahalios, a former federal Conservative leadership candidate, told the Marc Patrone radio show recently. “You can’t work from the inside of that party unless you hire some of the lobbyists and you show up with a bag of money and you tell them, ‘Set me up a meeting. I want to work from the inside.’ You can’t do it democratically.”

“They’re a left-wing progressive party with no democratic system on the inside. There’s no working it from within, so me and my wife have set up the New Blue Party of Ontario because people are tired of it. People are fed up with being betrayed and spending their money just to be betrayed when it’s expedient,” he said.

Jim Karahalios, a lawyer with degrees in engineering, said he experienced the party’s corruption firsthand in the Conservative leadership race last spring. He had been involved with the party for 15 years and founded activist groups such as “Axe the Carbon Tax” and “Take Back Our PC Party,” which challenged the party’s use of suspicious nominations that led to allegations of election fraud. He didn’t believe candidate Erin O’Toole’s claims of being a “true blue” conservative so he entered the race.

Karahalios was popular among the grass roots and had raised nearly $300,000 for his campaign. He was in third place when he was barred from the race after O’Toole complained that Karahalios had made “racist, Islamophobic” remarks about O’Toole’s campaign chair, Walied Soliman.

Soliman is a Toronto lawyer who had worked on the legalities of financing arrangements that satisfy Sharia Islamic law restrictions on charging interest. The recipient of the United Nations’ Global Citizen Laureate award in Canada in 2019, Soliman is also a board member of the Black North Initiative that seeks to promote “diversity and inclusion” of racial and sexual minorities and to implement “unconscious bias and anti-racism education” in the workplace.

Karahalios challenged the PC party ruling that ousted him in court and won, but he bowed out of the race with too little time left to reclaim his losses.

“They’re afraid of anyone who can win who is not controlled by the small cabal,” Karahalios told Patrone, adding that both federal and provincial PC leaders have betrayed their conservative voting base by reverting to “leftist” ideology as soon as they are elected.

“No one is buying that Erin O’Toole is true blue as he played himself off in that race,” Karahalios said. “Now he’s revealing who he truly is.”

“The biggest fallacy I hear from the pundits in the press and even in conservative circles is that we’ve got to move to the left to win, but that’s not based on any facts,” Karahalios said.  “When we try to copy and pretend we’re liberals, whether it’s on the provincial scene or federal, we lose.”

Belinda Karahalios was elected under a PC banner in 2018 but said she wouldn’t do that today because the party has abandoned its election platform.

“The consistent lying to their base, the lack of transparency, who's scratching who's back and it's all gone away from the 'little guy,'” she told Guelph News. “We had issues with people getting involved with politics before and it's getting worse because people are seeing that they put their faith into a political party or a leader and the person gets into power and all the promises are broken, they forget about.”

Karahalios voted against Bill 195, which she described in a press release in July as an “unnecessary overreach on our parliamentary democracy.”

“At its core, Bill 195 takes away the legislature's ability to vote on the use of extraordinary emergency powers on Ontarians for the next year,” the MPP said.

In her new role in the New Blue Party, Karahalios has challenged the Ford/PC government task force, which wants to adopt the Trudeau administration’s mandate for gender and sexual “diversity quotas” for all companies that trade on the stock market, calling it a “left-wing” policy that only creates “new regulatory burdens on business.”