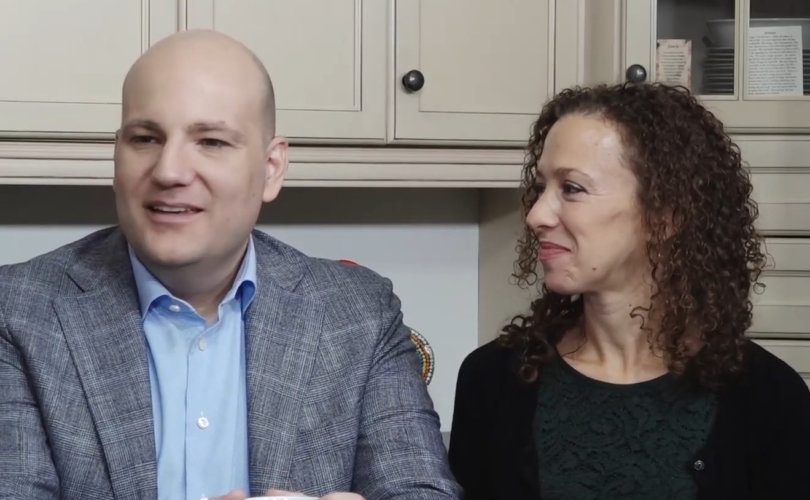 Belinda is currently the Member of Provincial Parliament (MPP) for Cambridge, Ontario, and Jim is a lawyer who has been involved with the Progressive Conservative (PC) Party currently in power for a long time. Jim started the Axe the Carbon Tax campaign that the New Blue party’s website says “changed the political narrative in Canada by uniting conservative leaders against Justin Trudeau’s carbon tax.”

Jim Karahalios’ Axe the Tax campaign was so notable that it led a host on the Ontario public broadcaster, TVO to state that “you should read about Jim Karahalios, that’s one guy who had a huge impact.”

Last year, Belinda Karahalios made headlines as she was the only PC MPP who voted against Bill 195, which was the legislation used by Premier Doug Ford’s government to extend lockdown and emergency powers indefinitely — under the auspices of public health to fight COVID-19. She was kicked out of the party for voting against the main narrative in the party. It was an unprecedented move — an MPP being kicked out for one vote against the party line — but the couple doesn’t believe it was inconsistent with what they see as a “bully” atmosphere of the PC Party.

In 2017, Jim was sued by then party leader Patrick Brown for his anti Carbon Tax advocacy. Karahalios won the suit, as the judge ruled against Patrick Brown.

Recently, Jim and Belinda went through a difficult time as a family as Jim battled bone cancer. After various medical interventions, Jim and his wife decided to go ahead and start their new party.

In Canada and most of the former British Commonwealth, the color blue is associated with social and political conservatism. For this reason, Jim and Belinda wanted to show voters that they were a “true blue” party with “blue values,” as opposed to supposed conservative parties that do not fit the bill.

It is the contention of Jim and Belinda Karahalios that the PC Party in Ontario, which is the only option for conservatives, is “not conservative.” Jim told LifeSiteNews, “You call it the conservative party it’s not it’s the progressive party … it comes from that party where they used to pretend they were for free votes.”

Not only does the Karahalios couple believe that the PC Party is not actually representative of conservatives. They say the party is corrupt morally and that “there are no free votes” to “vote your conscience” in the party.

Jim was close with former Toronto Mayor Rob Ford who, he said, battled “some personal demons” but was “such a wonderful mayor, a great conservative.” Ford died of cancer a few years ago, and Jim stated that his friend told him about Doug Ford, his brother: “You don’t understand, my brother’s a pinko [communist].”

— Article continues below Petition —
PETITION: Urge the Quebec Knights of Columbus to REVERSE draconian vaccination requirements
Show Petition Text
3124 have signed the petition.
Let's get to 4000!
Thank you for signing this petition!
Add your signature:
Show Petition Text

Both Jim and Belinda believe it shouldn’t be a surprise that Doug Ford and his PC Party have taken a seemingly totalitarian direction, as what Jim thought was simply Rob Ford speaking from a place of “sibling rivalry” might actually be the case.

Jim and Belinda are both committed pro-life Christians. According to the couple, the PC Party does not welcome pro-life party members, and any that are must keep those views to themselves while serving in the legislature. The founding constitution of the New Blue Party states: “The health and wellbeing of society is improved by strong families in which parents are the primary educators and caregivers of their children and by recognizing the inherent value and dignity of human life from conception to natural death.”

When asked why they would include an explicitly pro-life stance in a political climate that is often unfavorable, Jim said, “You want to recognize the principles and the values of blue voters that make up your party and having a statement like that was just obvious to us, and we’re both pro-life and we’ve been attacked in politics for saying we’re pro-life.”

Jim is convinced voter fraud occurred during the 2018 PC Party election for a party president, which he said rigged the election against him. He told LifeSiteNews that this was largely due to his unapologetic pro-life and pro-family conservative views.

With an election in June 2022, Jim and Belinda are “full steam ahead” with their efforts to compete in the next provincial race. They are almost done registering riding associations in each jurisdiction around the province and believe that in November registration will be open to run as a candidate for the New Blue.

They are not looking for career politicians, and do not pretend that the PC Party can be “fixed from within,” as they believe the party operates with a “culture of corruption … where the leader at the top and a few people in in a back room make the decisions and everyone has to follow the line.” Instead, they envision a “grassroots party based on blue values and blue principles where when you’re a member you can contribute you can influence and have your voice heard.”

The couple stated multiple times that “all politics is local,” referring to the need for citizens to be involved in regional matters as much or more than federal, and it is their contention that the New Blue Party of Ontario will give Ontarians a fresh option for true-blue conservatism in the province.