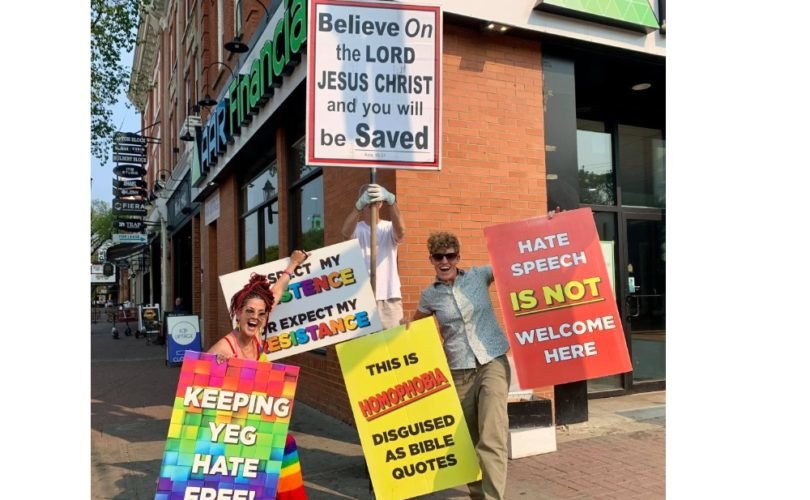 On July 16, Janis Irwin, a Member of the Legislative Assembly (MLA) of Alberta who identifies as gay, posted a photo of herself and a companion standing with signs in front of Edmonton street preacher Dale Malayko on Twitter.

Malayko, who frequently preaches at a city junction LGBT activists call “Pride Corner,” was holding a sign reading “Believe on [sic] the Lord Jesus Christ and you will be saved.” Irwin held two signs, one reading “This is homophobia disguised as Bible quotes,” and the other, “Hate speech is not welcome here.” Irwin’s female companion held signs reading “Respect my existence or expect my resistance,” and “Keeping YEG [Edmonton] hate free.”

Stop by! They’re there every Friday night til late, drowning out the hate! �� pic.twitter.com/l4e6iiQWA2

Irwin’s accompanying tweet acknowledges the habitual protest of Christian preachers at the corner. It reads, “On my way back home and I couldn’t possibly drive past Pride Corner without stopping. Stayed just long enough to hear about my sins and dance a little too. Stop by! They’re there every Friday night til late, drowning out the hate!”

Irwin also posted the photo to her Facebook page, where she received positive comments from her followers, but some negative comments as well.

“I am confused, the scripture on the sign has no reference to homosexuality. How is that hate speech?” one follower asked.

Another Facebook user wrote, “The Christian has every right to be there – freedom of speech – preaching what he genuinely believes. You’re the ones invading his space to make a scene and to provoke a reaction. If you don’t like what he has to say, just move on – what you’re doing is creating a confrontation and there’s no need for that.”

“In a climate where Christians are perceived as fair targets and churches are being burned and vandalized, a politician promoting this appalling behaviour shows pathetically poor judgment at best,” she wrote.

Slobodian stated that it is “fine” that two of the people in the photo can express their views. However, there is a problem: Irwin’s involvement.

“[A] politician inserting herself into this is a pure intimidation tactic against someone she disagrees with,” the columnist said.

“Irwin is obliged to fairly represent Christians in her constituency,” she continued.

“With her intolerant bias, can she? Christians leaders must step out from behind the safety of their pulpits and tell this MLA to respectfully stop mocking Jesus and those who, in Irwin’s view, have the audacity to worship Him.”

Irwin objected to Slobodian’s column, taking to social media to say that she had been “targeted by a far-right ‘news’ outlet for the ‘reprehensibly rabid intolerance’ I exhibited by popping by Pride Corner last Friday.”

So, I’ve been targeted by a far-right ‘news’ outlet for the “reprehensibly rabid intolerance” I exhibited by popping by Pride Corner last Friday.

I also received this email from a young person who saw that I was there. Their identifying information has been removed.

Irwin’s tweet included a message from a “young person” who claimed she felt targeted by Malayko’s street sermons.

In a subsequent tweet, Irwin claimed that she has been “getting some awful, hateful messages” but “that won’t stop me. How we show up matters. How we respond to those who wish to keep kids like this one in the closet matters.”

Irwin also tweeted that the so-called “Pride Corner” is where “where notoriously homophobic street preachers spread their hate.”

Slobodian published a second column on July 20 to refute Irwin’s claim that she had been the target of a “far-right news outlet.”

“NDP MLA Janis Irwin is not a victim of homophobia or any other martyr label she chooses to throw around,” the columnist wrote.

“She’s a well-paid elected official representing Edmonton-Highlands-Norwood who behaved in a juvenile, offensive manner that’s unacceptable and unbecoming of someone who holds public office,” Slobodian continued.

“If any other politician or public figure did what she did, they’d be subject to exactly the same scrutiny she received in this column Monday.”

Slobodian added that being “female and gay” does not excuse “one from being held accountable for mocking and offending the Christian community — precisely what Irwin did – some of whom she was elected to represent.”

“Too often, when people fail to do their jobs properly they deflect warranted criticism by accusing others of persecuting them because they are female, or gay, or a certain skin colour, or suffer white privilege, or ate Cheerios for breakfast, or whatever excuse they can conjure up,” she continued.

“They camouflage this tactic by presenting themselves as caring champions for the downtrodden. And maybe they are – that still doesn’t excuse poor conduct. The victimhood complex excuse won’t work here.”

Irwin belongs to the left-wing, pro-abortion New Democratic Party (NDP) of Alberta. She serves as the party whip and critic for women’s and LGBTQ issues. Her local riding is Edmonton-Highlands-Norwood, which is not where the so-called “Pride Corner” is located.

Lifelong Edmonton resident and retired firefighter Dale Malayko has been preaching near the corner of Whyte Avenue and Calgary Trail for approximately nine years. It is a popular area for Christian evangelists and now also for the LGBT activists who protest their presence.

Malayko was ticketed for peacefully expressing his opinions on a public sidewalk in 2019. His ticket was dropped in late 2020 with help from this legal team at the Justice Centre for Constitutional Freedoms (JCCF).

The Alberta NDP, headed by Rachel Notley, governed the province from 2015 to 2019.  While in power, the NDP targeted faith-based institutions, including publicly funded Catholic and Christian schools.

In 2017, Eggen passed Bill 24, or “An Act to Support Gay-Straight Alliances,” which banned schools from telling parents if their child had joined a “gay-straight alliance” without the child’s consent, regardless of the age of the child.

A group of more than two dozen religious schools in Alberta fought Bill 24 for their right to not allow “gay-straight alliance” (GSA) clubs in their school after an Alberta judge blocked them from doing so.

The current United Conservative Party (UCP) government came to power in 2019, and  Bill 24 was repealed soon after.