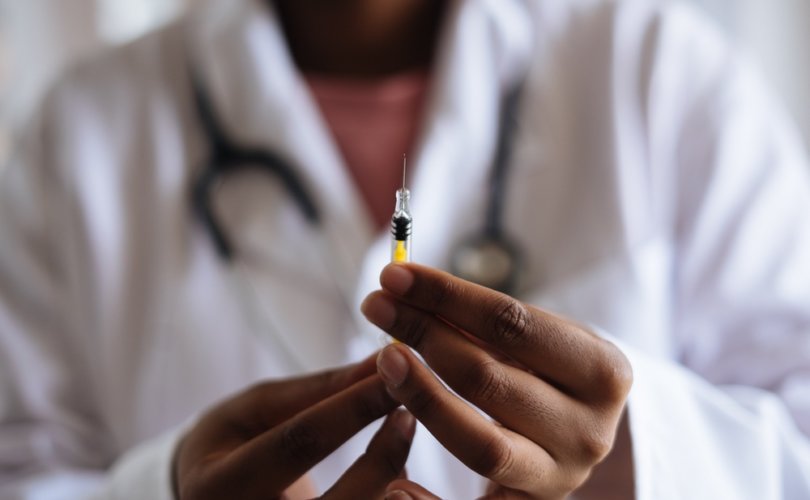 (WND News Center) – Nearly three-quarters of unvaccinated Americans would quit their jobs if they were required to take a COVID-19 vaccine, according to a poll by the Washington Post and ABC News.

Only 16% of unvaccinated workers would get a COVID shot if required, 35% would ask for a medical or religious exemption and 42% would quit their job, according to the results reported by the Daily Caller.

But if a medical or religious exemption were not available — which essentially is the case for Washington state employees, for example — 72% said they would quit their job.

Meanwhile, a survey of 961 American employers found that 52% will have some sort of vaccine requirement by the end of this year.

In a Fox News poll in August, 44% of Americans said they are more likely to shop at a business that requires employees and customers to be vaccinated or have a recent negative COVID-19 test. Only 24% were less likely.

State employees, under Democratic Gov. Jay Inslee’s mandate, also face the loss of their job if they don’t get vaccinated.

Rantz previously reported there is strong resistance to the governor’s mandate, including from State Patrol troopers and teachers.

Rantz obtained an internal poll of the State Patrol Troopers Association conducted Aug. 9-17 that found 295 troopers said they would refuse vaccination at the risk of being fired.

In a more general question, 449 troopers said they disagree with mandatory vaccinations. Only 19 said they supported it.

The association said in an email to members: “Important questions need to be addressed, including what the agency will look like with a 20-35 percent loss of employees? How will the agency deploy resources to the areas that are most impacted?”

In Los Angeles, hundreds of first responders have formed groups to oppose a new city law requiring all public employees to be vaccinated against COVID-19, the Los Angeles Times reported.

A group called Firefighters 4 Freedom said in a statement that its objective “is to stop the mandated vaccinations for all City employees as well as the citizens of this great country.”

“We want to bring education and truth to the people without being censored,” the group said.

On its website, the group states it’s “not a vaccine versus non-vaccine issue, this is not a left verse right political issue.d”

This is a human rights issue,” the group states. “We hope you stand with us, for we believe all members and citizens have the freedom of choice and natural rights. Your body, your choice. My body, my choice.”

Doctors are also challenging the mandates, including with lawsuits.

University of California Irvine School of Medicine psychiatrist and medical ethicist Aaron Kheriaty is suing the university system to recognize his natural immunity from COVID-19 recovery, Just the News reported.

He has the help of six UC medical professors who wrote that the UC system’s 90-day medical exemption for recovered faculty is “not supported by scientific data and underestimates the durability of natural immunity,” which is far better established than for COVID-19 vaccine-induced immunity.

They cited the many studies worldwide that establish “prior infection with SARS-CoV-2 appears to provide greater than 99% efficacy from reinfection” due to “antibodies to the nucleocapsid and to the spike protein, T-helper cells, B-cells, natural killer cells, and innate immunity.”