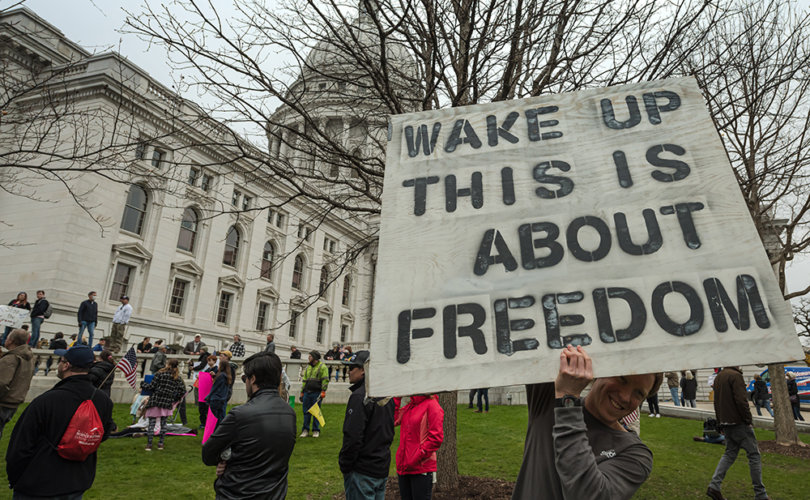 The poll was produced by the Trafalgar Group, in conjunction with Convention of States Action, and demonstrated an overwhelming rejection of vaccine mandates by over 71 percent of participants.

The Trafalgar Group’s national survey was conducted between July 12 and 13, with 1077 respondents, 71.4 percent of whom said that taking a COVID vaccine should “be a personal choice.” 21.8 percent said that this vaccination ought to be mandatory, and 6.8 percent of respondents were unsure.

Breaking down the poll, Trafalgar revealed that a majority of those who vote Democrat and those who vote Republican both lean against vaccine mandates, with 58.7 percent of the former group favoring personal choice, and a massive 87.3 percent of Republican voters rejecting vaccine requirements. A small majority of respondents affiliated themselves with the Republican party, weighting the overall results more strongly against vaccine mandates.

33 percent of Democrat voters said they would like to see vaccines mandated while only 7.2 percent of Republicans shared that view. More Democrat than Republican voters reported being “unsure” which side to fall on, 8.4 percent to 5.5 percent respectively.

67.2 percent of those who stated no party affiliation voted in favor of the freedom to choose to be vaccinated, with 26.5 percent saying they should be mandatory, and 6.3 percent remaining unsure.

Mark Meckler, President of Convention of States Action, commented on the poll, saying that the results “reveal that hundreds of millions of social media messages, a constant stream of propaganda from the press, paid TV and radio ad campaigns coast-to-coast, daily hammering from Biden Administration officials, and cajoling from influencers and celebrities on every possible communication platform are having one profound effect on the public. It’s all backfiring.”

Meckler added that “Americans have never taken kindly to being told what to do, and they are not going to start now,” arguing that “[a]fter being told ‘my body, my choice’ for nearly five decades by the same crowd now hypocritically pushing mandates, is it any wonder the public isn’t on board?”

Since the July poll was conducted, President Joe Biden has announced a sweeping vaccine mandate, ordering government agencies and private businesses with over 100 employees to require COVID-19 vaccination of their staff or face hefty penalties.

Trafalgar, again in conjunction with Convention of States Action, subsequently polled voters on whether they believe Biden has the constitutional authority to impose such a mandate on businesses, discovering that the majority of Americans do not believe the president holds this power.

Trafalgar conducted the survey between September 10 and 12, finding that, among its 1098 respondents, 58.6 percent said “no” to Biden being able to impose vaccine requirements on employers to their own employees. 29.7 percent said the president does have this power and 11.7 percent said they were “not sure.”

Unlike with mandating vaccination against COVID-19 in general, where there was largely agreement among Democrat and Republican voters, on Biden’s authority to mandate the jabs for businesses there was a much greater disparity in responses across the aisle.

In fact, a majority of Democrat voters polled, 54.9 percent, said that Biden does have the constitutional authority “to force private businesses to require vaccine mandates for employees.” 27 percent answered no to the same question, and 18.1 percent were not sure whether he has the authority.

Conversely, the vast majority of Republican voters in the survey, 83.5 percent, said that Biden does not have the authority to demand employers to mandate the COVID shots. Only 10.7 percent said that he could impose such a mandate, and 5.8 percent reported being unsure.

Those with no party affiliation also voted strongly against the notion that Biden has the authority to impose his vaccine mandate on businesses, with 68.2 percent saying the president is constitutionally unable to do so. 21 percent of this group said that Biden can impose the mandate and 10.9 percent reported being unsure.

Almost immediately following Biden’s announcement, many Republican state governors and attorneys general voiced their opposition to the president’s edict, declaring his actions as “unconstitutional” and a “power grab.”

Poll participants were asked whether they supported the efforts of governors who openly opposed Biden on the vaccination diktat, and whether Biden sets a dangerous precedent “that could be abused by future presidents.”

The majority of respondents agreed with the efforts of governors to oppose Biden on mandating businesses to force vaccination on employees, with 56.1 percent voting in their support and 40.1 percent opposing their efforts.

Again, Republicans overwhelmingly voted against the mandate with 78.5 percent surveyed backing governors who have opposed Biden on the issue, and only 18.6 opposing them. Democrats, however, responded largely against governors opposing Biden on his vaccine requirement, with 65.7 percent voting against the efforts of such governors and only 23.3 percent voting in favor.

Meckler commented on the poll, stating that the “numbers are clear” in showing that “the American people passionately oppose Biden’s vaccine mandate, and will not tolerate a President elected by the people acting like a dictator or king.”

Meckler suggested that, overall, voters understand Biden’s mandate to set a precedent that “will quickly lead to an end to our Republic and the beginning of an oppressive new tyranny.”

“Our citizens stand squarely with courageous, principled governors who know this isn’t about health, science, or compassion, it’s a naked political power grab.”

The Trafalgar Group is a polling company noted for providing some of the most accurate predictions of the U.S. presidential elections in 2016 and 2020, both of which many other pollsters, like the Washington Post, biased strongly in favor of the Democrats.

In 2016, for instance, major polls analyst FiveThirtyEight actually increased Hilary Clinton’s chances of winning the presidency on the night of the election. The Trafalgar Group, on the other hand, accurately predicted that Donald Trump would win with 306 electoral votes, according to a report in Amac.