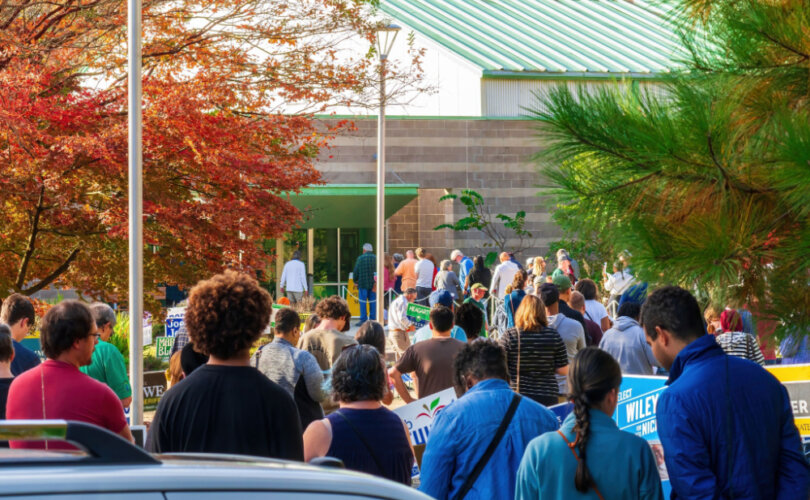 The line to vVote sttretches to the parking lot on the last day of early voting in North Carolina in 2022 at the Lake Lynn Community Center.Shutterstock

(LifeSiteNews) — A poll conducted during and after the 2022 U.S. midterm elections found that a majority of U.S. likely voters believe cheating probably affected the outcome of “some elections this year.”

Rasmussen Reports surveyed 1,000 Americans on November 8 and 9, both online and by phone, with election-related questions including, “How likely is it that the outcome of some elections this year will be affected by cheating?”

According to a report released Monday, 57 percent of those surveyed said they think it is likely that cheating affected election outcomes, including 30 percent who believe that it is “very likely.” Forty percent of respondents indicated they do not believe cheating is likely to have affected election results, including 18 percent who believe it is “not at all likely.”

“These are the highest numbers we’ve seen when considering cheating in midterm cycles,” remarked Mark Mitchell, the head pollster of Rasmussen Reports, as he reviewed the survey responses.

The survey further found that Republicans were significantly more likely than Democrats to believe that the U.S. midterm elections were probably affected by cheating. Forty percent of Democrats and 50 percent of Independents, versus 79 percent of Republicans, believed this to be the case.

Reports of broken vote tabulation machines emerged from all over the country on November 8, including in Arizona, New Jersey, New York, Michigan, Pennsylvania, and Indiana.

In Arizona, where votes for the hotly contested governor’s race are still being counted, a large percentage of tabulating machines in Maricopa County reportedly experienced errors that prevented voters from submitting their ballots.

The chairman of the Maricopa County Board of Supervisors told Fox News on Tuesday the county was experiencing “some hiccups with about 20% of these tabulators,” and that the ballots would be counted later by election officials if they were placed in a box for that purpose.

One woman reported on election day that a number of tabulator machines were malfunctioning at churches in a conservative area:

My dad just called me from Central Christian Church in Mesa, AZ

Went down the street to another church. That one also had broken machines

We live in a conservative area. If we lose AZ, you know why

Rasmussen’s recent poll also found that a majority of voters said mail-in voting “makes it easier to cheat,” and that no demographic, including Democrats, believed by a plurality that mail-in voting makes it harder to cheat.

It is notable that, according to Rasmussen Reports, the percentage of Americans who reported a belief that cheating likely affected the 2022 midterm election outcomes — 57 percent — is significantly higher than the 52 percent of respondents who believed this to be the case for the 2020 presidential election.

Claims of fraudulent interference with the 2020 presidential election had circulated among many conservatives due to a variety of ballot and voting machine irregularities witnessed and testified to by poll watchers, data analysts, and others.

The prevailing mainstream media narrative holds that stolen election fears are a “debunked conspiracy theory” on the grounds that legal challenges to the 2020 election results failed in court, despite the fact that many legal briefs on Trump’s behalf were dismissed over process issues without a judge ever considering their contents.