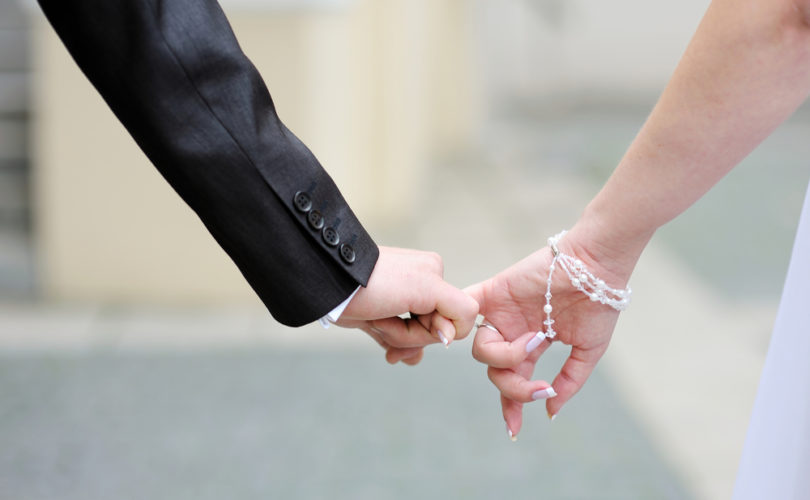 October 27, 2020 (LifeSiteNews) – A poll conducted earlier this year says that a majority of Republicans are opposed to same-sex “marriage” and that support for matrimony defined as between one man and one woman is higher amongst those who identify as “conservative” within the party.

The “2019 American Values Atlas” survey, published in April by the Washington D.C. based Public Religion Research Institute (PRRI), which was mainly funded by pro-LGBTQ foundations.

In regards to marriage, the survey asked participants: “do you strongly favor, favor, oppose or strongly oppose, allowing gay and lesbian couples to legally marry?”

The poll found that overall, only 47 percent of Republicans voiced support for same-sex “marriage.”

When it came to those who identified as conservative Republicans, only 40 percent said they approve of same-sex “marriage.”

When it comes to Democrats, the survey found that the majority, 70 percent, reported being in favor of same-sex “marriage.”

Amongst Independents, a total of 66 percent reported support for same-sex “marriage.”

The PRRI lists itself as a “nonprofit, nonpartisan organization dedicated to conducting independent research at the intersection of religion, culture, and public policy.”

Their survey sampled a total of 53,474 people via “bilingual telephone interviews” from all 50 states throughout 2019.

Listed as funders for the “2019 American Values Atlas” survey are various foundations tied to the LGBTQ community, those being the Gill Foundation, the Arcus Foundation, the E. Rhodes & Leona B. Carpenter Foundation, the Evelyn and Walter Haas, Jr. Fund, and Unitarian Universalist Veatch Program at Shelter Rock.

— Article continues below Petition —
PETITION: Dump Twitter and Big Tech for threatening our democracy and freedom of speech!
Show Petition Text
15623 have signed the petition.
Let's get to 17500!
Thank you for signing this petition!
Add your signature:
Show Petition Text

The foundations individual websites show them all to be advocates for LGBTQ rights, which includes support for same-sex “marriage.”

The survey asked a variety of questions relating to LGBTQ issues, and overall states that 72 percent of Americans “support LGBT nondiscrimination protections” and that a majority (56 percent) oppose allowing small business owners “to refuse services to gay and lesbian people based on their religious beliefs.”

The survey also says that support for business owners who refuse “gay and lesbian people” service because of their faith, has increased.

“This landmark survey also finds some erosion in opposition to allowing business owners to refuse to serve gay and lesbian people based on their religious beliefs,” said PRRI CEO and Founder Robert P. Jones in a press release about the poll.

The PRRI survey says that a total of 56 percent of Americans “oppose allowing a small business owner in their state to refuse to provide products or services to gay or lesbian people, if doing so violates their religious beliefs.”

Of this amount, 39 percent of Republicans, 70 percent of Democrats, and 57 percent of Independents oppose allowing small business owners “to refuse service to gay and lesbian people based on their religious beliefs.”

The survey says that amongst Americans who view President Donald Trump “favorably,” just under half, 48 percent, support same-sex “marriage.”

For those that view Trump in a negative light, 74 percent say they support same-sex “marriage.”

Broken down by faith, the survey states that those who identified as white evangelical Protestants are the biggest religious group who oppose same-sex “marriage”, with only 41 percent in support.

For those who identified as Catholics, support for same-sex “marriage” is in the majority.

The survey states that 63 percent of “white Catholics” are in favor of same-sex “marriage,” rising to 68 approval amongst “Hispanic Catholics.”

Overall, the survey says that 62 percent of Americans support same-sex “marriage” with 33 percent being opposed, which is the same result as 2018.

In 2017 a Gallop survey found that 64 percent of those who were surveyed said that same-sex “marriage” should be recognized as valid, while 34 percent said that it should not be.

The PRRI survey says that overall, women (65 percent) are more than likely than men (58 percent) to show support for same-sex “marriage.”

Geographically speaking, the survey states that overall, the biggest opposition to same-sex “marriage” comes from those who live in the south, with only 57 percent approving.

In comparison, a total of 67 percent of those who live in the Northeast and 64 percent living in the Midwest approve of same-sex “marriage”

The PRRI survey also stated that opposition to same-sex “marriage” has increased amongst those who live in the West. In 2018, 67 percent of those surveyed approved, compared to 62 percent today.

Compared to a PRRI survey done in 2011 titled “The Millennials, Religion & Gay and Lesbian Issues Survey,” the “2019 American Values Atlas” survey suggests that support for same-sex “marriage” has risen overall amongst both Republicans and Democrats.

At the federal political level, while President Donald Trump has a long list of pro-life accomplishments and is very supportive of religious liberty, he supports same-sex “marriage.” In August Trump said that it was his “great honor” to be called the “the most pro-gay president in American history.”

Vice President Mike Pence on the other hand has a track record of being a strong social conservative on marriage issues.

Biden says he is a Catholic, but the Catholic Church does not recognise so-called same-sex “marriages.” Rather the Catholic Church teaches that marriage can only be between one man and one woman and that same-sex inclination is “objectively disordered,” while instructing “compassion, and sensitivity” for those with such tendencies.

Biden has in the past said he was opposed to same-sex “marriage” but publicly flip-flopped on the issue in 2008, and has been a staunch supporter of it ever since.