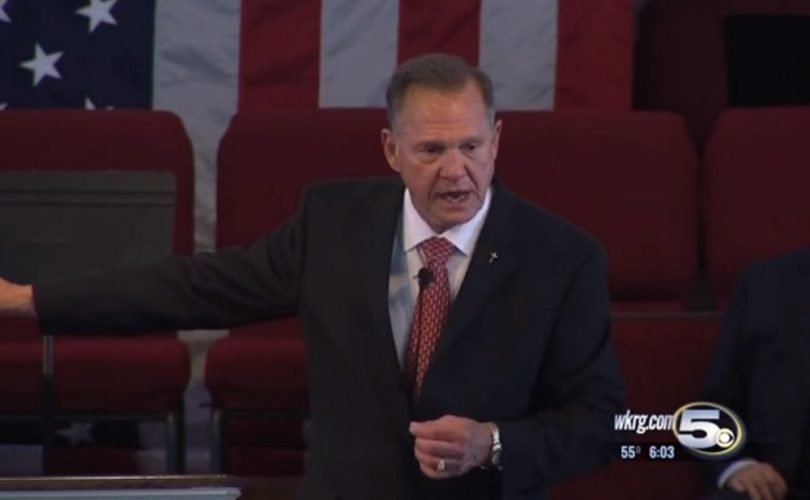 Fifty-one percent of 515 likely GOP voters said they would vote for Moore compared to 32 percent for Strange if the election were held today. The poll of 515 Alabamans was conducted by JMC Analytics and Polling on August 17 and August 19.

“Former Chief Justice Roy Moore at the outset of the runoff has consolidated support from the ‘also rans,’ and that when combined with his bedrock support among evangelicals is giving him a substantial initial lead,” JMC said in analyzing its results, “while appointed incumbent Luther Strange has not been helped by the support from both President Trump and Senate Majority Leader Mitch McConnell.”

Moore and Strange face off September 26 for the Republican nomination. The winner will face Democrat Doug Jones on December 12 to fill the Senate seat vacated by Sen. Jeff Sessions, chosen by President Trump to be Attorney General.

No Democrat has won statewide office in Alabama since 2006 or been elected to the Senate since 1992, so the GOP primary runoff election will likely decide who is the next Senator from the southern state. Alabama went 62 percent for Trump to 34 percent for Hillary Clinton in November.

Twenty-four percent of those polled said they had voted for a candidate who did not make the runoff. Sixty-eight percent of the respondents described themselves as evangelical Christians and 70 percent said they would be voting in the runoff election.

Question 5 of the survey asked if Trump's endorsement of Strange in the Senate primary — which ”baffled” Brooks and many other Alabama conservatives — made the respondent “more or less likely to vote for Luther Strange.” One-quarter (25 percent) said “more likely” and 23 percent said the Trump endorsement made them less likely to vote for Strange, who was picked to fill Sessions’ seat by Robert Bentley, Alabama’s former governor who resigned amid an adultery scandal. More than half of those polled (51 percent) said it made no difference to them.

No love for Mitch McConnell

In the initial GOP primary, the McConnell-allied Senate Leadership Fund PAC’s sometimes vicious attack ads against Brooks bloodied the House Freedom Caucus member’s campaign, but, as the poll suggests, conservatives who voted for Brooks now will likely move to Moore rather than Strange, though Brooks has yet to make an endorsement for the runoff.

As Breitbart reported, “this poll seems to indicate that Moore is the only candidate gaining more votes while Strange is stuck with a ceiling of what he got on primary day before the runoff.”

JMC Analytics had three “main takeaways” from the poll:

(1) “Former Chief Justice Roy Moore surges into an early runoff lead due to support from a substantial number of those who did not support either runoff contender in the August 15 primary;

Moore and his team have already challenged as defamatory one of the ads run against him by the Senate Leadership Fund, WND reported.

Yesterday, Moore tweeted, “In his home state, Mitch McConnell has a 18% approval rating, yet he's trying to control Alabama voters?” as he linked to a story in The Hill about the Senate Majority Leader’s abysmal poll numbers.