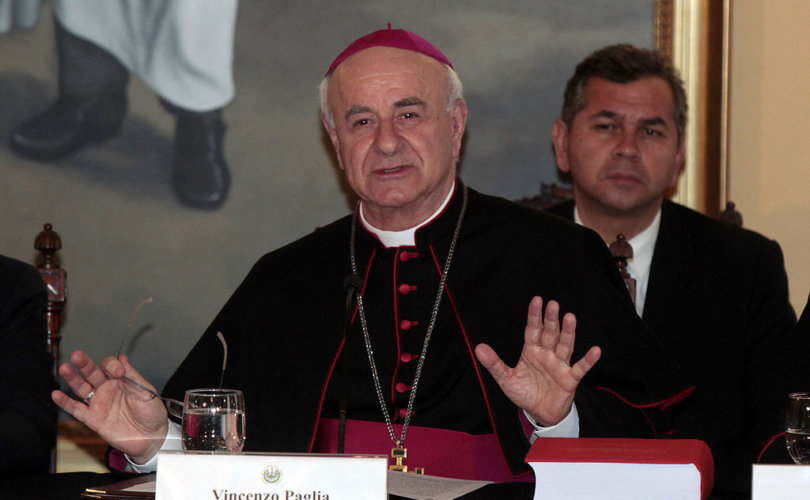 VATICAN CITY (LifeSiteNews) – The Vatican’s Pontifical Academy for Life is jointly organizing a conference on the “Ethics of engineering life.”

The conference, to be held September 26-27, will address the “ethical” use of “gene-based and cell-based therapies” and follows the Academy’s ardent promotion of the gene-therapy COVID-19 injections.

The Pontifical Academy for Life (PAV) announced the online conference last week, noting that it would be the first international event:

The conference is jointly organized by the NCCR Molecular Systems Engineering of the University of Basel and ETH Zurich, along with the Vatican’s Pontifical Academy for Life, and the Bambino Gesù Children’s Hospital, which is under the Vatican’s care.

Participants will address advances made by “molecular and cellular systems for clinical applications” in the past decade, focusing on the use and development of “gene-based and cell-based therapies” in the field.

The conference site notes that such scientific advancements can “help to cure pertinent diseases,” but also can be “misused in various ways.” In order to assess the “ethical aspects,” the PAV’s conference will assemble “stakeholders in developing and applying approaches to edit and control living systems, clinicians applying such procedures, ethicists, philosophers, communicators and artists, and other relevant representatives of our global society.”

Though the conference is being held online, the Vatican’s involvement is noteworthy. PAV chancellor Father Renzo Pegoraro and its president Archbishop Vincenzo Paglia will both deliver opening addresses to the participants. Young scientists are also being invited to Rome to deliver their research as part of a special session.

Among the speeches given at the event will be two drawn from the “lessons learned” from the COVID-19 era, including one entitled “COVID-19 and vaccines: what did we learn?”

The conference will also examine the “religious views” on the subject of “engineering life,” with opinions from Christianity, Judaism, Buddhism, and Islam to be offered.

The context of the conference is the PAV’s consistent promotion of the abortion-tainted COVID injections, which has been echoed by its president, Archbishop Paglia. Around this time last year, the PAV hosted a conference called “Public health in global perspective: Pandemic, bioethics, future”; there Paglia joined prominent abortion supporters, an ex-friar, and a pro-abortion Rabbi. The speakers attacked “vaccine hesitancy,” with Paglia himself calling “the greatest vaccination effort ever made in history” as “the priority,” before describing “vaccination” as “crucial” in protecting against COVID-19.

The COVID shots have been described by Dr. Robert Malone – an inventor of the mRNA technology they employ – as “gene therapy procedures” rather than “traditional protein or polysaccharide-based vaccines.”

— Article continues below Petition —
PETITION: Canonize Navy chaplain Fr. Capodanno for giving his life to save souls
Show Petition Text
7908 have signed the petition.
Let's get to 9000!
Thank you for signing this petition!
Add your signature:
Show Petition Text

Dr. Malone’s opinion is shared by Stefan Oelrich, the president of Bayer’s Pharmaceuticals Division. Oekrich noted  during the 2021 World Health Summit that “ultimately the mRNA vaccines are an example for that cell and gene therapy.”

The U.S. Centers for Disease Control and Prevention (CDC) has recorded 1,407,409 reports of adverse events following COVID-19 injections between Dec. 14, 2020, and Sept. 9, 2022, including 30,935 reports of deaths and 257,227 serious injuries, including deaths. The CDC’s voluntary reporting system, the Vaccine Adverse Event Reporting System (VAERS), has historically been shown to report only 1% of actual vaccine adverse events.

While the PAV’s position on matters to be discussed in the upcoming conference is not known, it is not unlikely that the Academy would support “gene therapies” and “engineering life” given its record on the COVID-19 injections.

The PAV itself has been described as being permeated by “heretical gnosticism” after it was overhauled by Pope Francis beginning in 2016. The Pope released new statutes for the PAV in November 2016, in which members were no longer required to sign a declaration that they uphold the Church’s pro-life teachings, while also expanding the PAV’s mandate to include a focus on the environment.