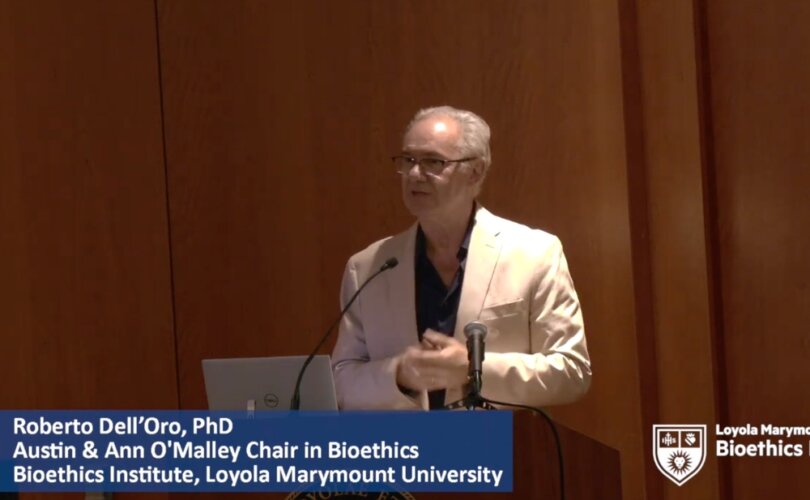 VATICAN CITY (LifeSiteNews) — Support for abortion has become the trend within Rome’s Pontifical Academy for Life (PAL), as yet another member voiced criticisms of the landmark Dobbs decision that overturned Roe v. Wade, with other adamant supporters of abortion newly appointed to the Academy.

Professor Roberto Dell’Oro, now an Ordinary Member of the Pontifical Academy for Life in Rome, who teaches moral theology and holds the O’Malley Chair in Bioethics at Jesuit-run Loyola Marymount University in Los Angeles, voiced strong opposition to the Dobbs decision at a university event on October 12. In a lecture titled, “Confronting the Dobbs Decision: A Conversation About the Legality of Abortion,” Dell’Oro derided the decision as unjustly infringing on women’s personal freedom, autonomy, bodily integrity, and moral agency.

“In the potential conflict,” he said, “between a woman’s claim to autonomy and a state’s right to determine the future of her pregnancy, the Dobbs decision sides with the latter over the former, rejecting any space of ‘personal liberty’ for women, even in cases of rape or incest.”

“To impose a choice on women over matters that belong to their most intimate sphere threatens to compromise their integrity, bodily and otherwise, as persons,” he continued.

Despite saying he supported limiting abortion within the first trimester, Dell’Oro equated the pro-life Dobbs decision – which merely declared there is no federal “right” to abortion and allowed states to pass their own laws restricting abortion – to the intolerance of a totalitarian regime, claiming democracy maximizes freedom, apparently even to the point of allowing murder. Support for abortion, he claimed, was a necessary part of the “pluralism of moral perspectives” in a free and democratic society.

According to Dell’Oro, Dobbs “undermines basic requirements of tolerance toward the pluralism of moral perspectives within society. In matters of personal life, a democracy differs from a totalitarian regime because it maximizes, rather than restricts, a space of personal freedom for all citizens, including women.”

Not having access to abortion, Dell’Oro argued, takes away “dimensions that are essential to women’s freedom,” limiting their “full democratic participation.”

In an interview with Catholic News Agency on October 19, the professor of Catholic moral theology double down on his claims, saying that without the option to have an abortion, women cannot exercise moral agency in regard to their pregnancy.

“You can go all the way for the protection of the vulnerable from the moment of conception” he said, “but that means that you’re wiping out the agency of women.”

“Such moral agency gives women the freedom to decide whether and when to have children. It determines how they live their lives and how they contribute to the society around them.”

Dell’Oro went so far as to attack the orthodoxy of the PAL under Pope John Paul II, declaring it was “more of a space of an engagement in the pro-life movement in ways that were very much defined a priori by the boundaries of Catholic doctrine.” Apparently, the Catholic professor did not like the boundaries set by Catholic doctrine on the sanctity of human life. He praised the current milieu of the Academy, which, since the reshaping of the institution in 2017, has been opened to academics and scholars at odds with the Church’s moral teachings, including strong advocates of abortion, contraception, and euthanasia. Ordinary members now also include an atheist; all members are appointed by the Pope.

As LifeSiteNews has recently reported, “these papal appointments sparked public outcry, including an open letter of denunciation from a leading Catholic physician, who called them ‘just the opposite of what John Paul II wanted.’ The PAL responded to criticisms by defending the appointments as coming from Pope Francis personally and contributing to academic ‘dialogue’.”

In response to lecture of the professor, Bishop Joseph Stickland of Tyler Texas denounced Dell’Oro’s claims, calling for a public and immediate retraction of the statements or a removal from his position at the Academy.

“I won’t dignify the anti-life drivel of this so-called bioethicist by arguing against his statement,” Strickland said, “He is simply wrong and should either offer an immediate retraction or be summarily removed from his position.”

I won’t dignify the anti-life drivel of this so-called bioethicist by arguing against his statement. He is simply wrong and should either offer an immediate retraction or be summarily removed from his position. https://t.co/ofRtpXYhs4

The Catechism of the Catholic Church teaches that “Human life must be respected and protected absolutely from the moment of conception. From the first moment of his existence, a human being must be recognized as having the rights of a person – among which is the inviolable right of every innocent being to life” (CCC 2270).

“Since the first century the Church has affirmed the moral evil of every procured abortion,” the Catechism continues. “This teaching has not changed and remains unchangeable.
Direct abortion, that is to say, abortion willed either as an end or a means, is gravely contrary to the moral law” (CCC 2271).

Furthermore, the Church teaches that “The inalienable right to life of every innocent human individual is a constitutive element of a civil society and its legislation” (CCC 2273).