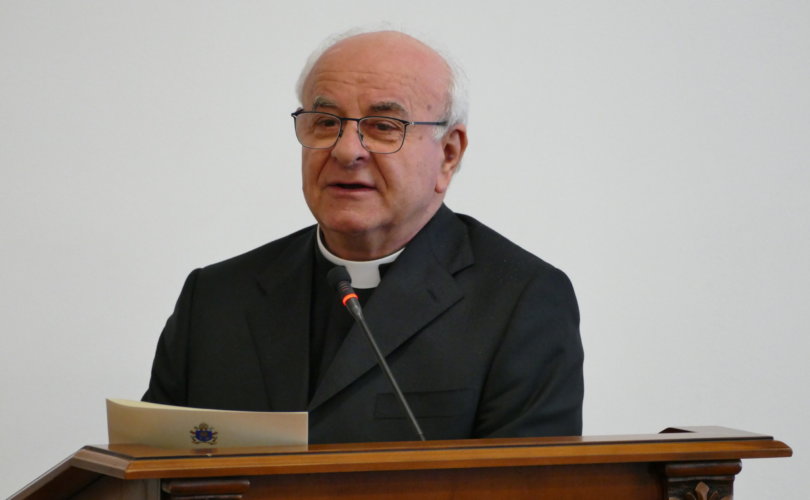 ROME (LifeSiteNews) – In a bizarre tweet Sunday, the Pontifical Academy for Life (PAV) claimed that abortion has “nothing to do” with the COVID vaccines tested on cells of aborted babies, while hailing the injections as “the only way to return to normal.” The academy, led by Archbishop Vincenzo Paglia, also lashed out at Catholic critics, suggesting that their concerns about the links between the jabs and fetal cell testing are “pure nonsense.”

“Some ‘Catholics’ only insult @PontAcadLife @PagliaAbp,” the tweet read. “But #COVID19 exists, and the only way to return to normal is to get #vaccinated.”

“#VaccinesSaveLives and abortions have nothing to do with. [sic] The rest is pure nonsense, #malinformation, exploitation of #USA discomfort.” It’s not clear what PAV meant by “USA discomfort.” The tweet included screenshots of a New York Times article about the negative psychological impact of lockdowns in the U.S.

The academy tagged several liberal, nominally Catholic journalists, like Father James Martin, SJ, and later retweeted a post by Martin, a dissident and a heretic who advocates for same-sex “marriage” and has publicly referred to God as female.

In a second tweet Sunday with the same message, the PAV also tagged Joe Biden’s official presidential Twitter account, the U.S. Catholic bishops, and the FDA.

As the PAV failed to note, all COVID vaccines available in the United States and Europe relied on cell lines derived from aborted babies in development, testing, or both, sparking outrage among many people whose religious convictions prohibit them from involvement in abortion.

The injections are also failing to stop transmission and infection, with the most vaccinated countries in Europe ramping up new social restrictions amid record-setting case levels and the spread of the Omicron variant. In Denmark, more than 90 percent of Omicron infections have been detected in vaccinated people, who have accounted for the majority of recent virus deaths in multiple E.U. nations and American states.

The PAV’s social media outburst on Sunday is hardly the first the time that Paglia or the academy, which Pope Francis reconstituted in 2016, have defended the abortion-tainted jabs or attacked Catholics with conscience objections.

At a press conference with secular medical organizations in July, Paglia ripped Catholics who question the jabs, telling them to “listen to what the Church has already said.” The PAV hosted another conference in September to promote the injections and combat “vaccine hesitancy,” inviting pro-abortion speakers, including a rabbi and an ex-friar.

Described by Archbishop Carlo Maria Viganó as a “living scandal,” Paglia openly rejects core tenets of Catholic moral teaching, including on marriage, the family, and assisted suicide. He’s also known for infamously commissioning a homosexual painter to design a blasphemous, sexually-charged mural for his cathedral church that features Paglia himself embracing another man.

The archbishop has doubled down on his aggressive support of the vaccines in recent weeks, repeatedly speaking in favor of vaccinating young children with the experimental COVID shots.

“We have to do everything! Vaccinate everyone, including children, in order to protect the greatest number of people possible,” he said in an interview last month with Crux. “Vaccination protects children from any, even if less frequent, serious consequence of COVID-19,” Paglia claimed, making no mention of vaccine injuries or unknown, long-term effects of the injections.

A December statement from the PAV on “Children and Covid” even declared that “the Vatican also considers the Covid vaccination over the age of five advisable,” though the Vatican later scrubbed that paragraph, according to La Nuova Bussola Quotidiana.

Children and teenagers face virtually no risk of death or serious illness from coronavirus. Between 0-0.03 percent of COVID cases in the United States under age 18 have resulted in death, according to the American Pediatric Association. The survival rate for COVID has been estimated at no lower than 99.7 percent for all age groups under 60 years old.

At the same time, numerous deaths and serious injuries, including heart inflammation and other cardiac issues, have been reported in children soon after COVID vaccination. In California, a 15-year-old boy with no underlying health conditions died of stress cardiomyopathy last year just days after his second Pfizer jab, mirroring a similar incident in Michigan. A three-year-old girl in Argentina died of a heart attack the day after a Chinese Sinopharm shot last month.

The bishops of Colorado noted in an August letter that “there is no Church law or rule that obligates a Catholic to receive a vaccine — including COVID-19 vaccines.”

“The novelty of the SARS-CoV-2 and of the technologies for eliciting an immune response to prevent or mitigate COVID-19 leave several medical questions unanswered,” the National Catholic Bioethics Center has said. “Only time and careful study of the virus and benefits and adverse effects of the vaccines will provide the answers many persons need to give free and informed consent.”

“Any link to the abortion process, even the most remote and implicit, will cast a shadow over the Church’s duty to bear unwavering witness to the truth that abortion must be utterly rejected,” a group of Catholic prelates warned in an open letter last year. “The ends cannot justify the means,” they said, describing abortion as “one of the worst genocides known to man.”

Pope St. John Paul II founded the Pontifical Academy for Life in 1994 with famed Catholic geneticist and pro-life advocate Venerable Dr. Jérôme Lejeune to protect “the value of human life and the dignity of the person.”

Pope Francis reformed the Academy in 2016, however, rewriting its statutes to add a focus on the environment and removing a requirement that members swear an oath, crafted by Lejeune, to uphold Catholic teaching on the sanctity of human life. Francis subsequently purged dozens of pro-life, orthodox appointees of St. John Paul II and Pope Benedict XVI and named new members who support abortion, euthanasia, contraception, homosexuality, and transgender hormone drugs, among other things.