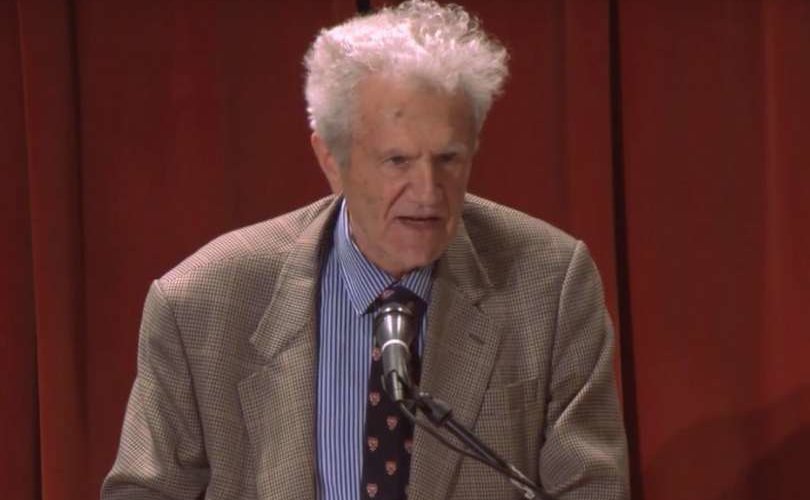 ROME, May 29, 2019 (LifeSiteNews) – One of the English-speaking world’s greatest living scholars of Classical philosophy was told he has been barred from all Pontifical Universities after he signed an Open Letter along with a number of prominent clergymen and scholars accusing Pope Francis of committing heresy.

Professor John Rist, 83, who converted to Catholicism from agnosticism in 1980, told LifeSiteNews that he had been refused entry into the Augustinian Patristic Institute in Rome where he had previously been doing academic work after a short absence.

A Pontifical university is an ecclesiastical school which has been established or approved by the Holy See.

“For years I have been allowed to leave a car at the Augustinianum where I am still doing [academic] work,” the scholar told LifeSiteNews by email.

“On May 18, I drove it out of their precinct, chatting in passing with an old priest friend in the Augustinian curia, telling him I would be away for a week. When I returned on the 25th I drove in through the gate and found the barrier down. I waited for the porter to open it, but nothing happened. So I got out and was told I could not enter the property.  Apparently … this was because some Vatican apparatchik had issued a decree that I [was] now [persona] non grata and … to be forbidden entry to all pontifical universities,” Rist continued.

“Since I had received no previous indication of it ― not even when I had collected the car ― this less than Christian response took me completely by surprise, not least since I had been there a week before and nothing was said about my being unable to return the car.”

The ban would be a sharp about-face for the pontifical universities: Professor Rist was awarded an honorary doctorate from the Pontifical institute Università della Santa Croce in 2002.

It is particularly worrisome to the professor because he was still supervising the PhD work of a student at the Institute, whose doctoral candidature is therefore now in doubt. Professor Rist told LifeSiteNews this morning that he has now been informed by the president of the Augustinianum, Fr. Giuseppe Caruso, O.S.A., that he may no longer supervise this student.

On April 30 Rist and eighteen others signed the Open Letter. The authors state in the letter that they based their charge of the Pope committing heresy on the many examples of the Pontiff embracing positions contrary to the faith, calling attention to seven in particular. The letter writers asked the bishops of the Catholic Church, to whom the open letter is addressed, to “take the steps necessary to deal with the grave situation” of a pope committing this crime.

Rist suspects that he has been barred from the Pontifical Universities because he signed the Open Letter.

When Rist attempted to return the car to the Augustinianum, he exchanged “free and frank” views with priests there but did not succeed in budging the “bureaucratic brick wall,” he said.

“When I was told by one of the priests that he could do nothing about it, I replied that he could just open the barrier – that being greeted with a cynical smile and shaking head: one felt the man of God (an American) was enjoying it.”

After the scholar, who had taught part-time at the Augustinianum as a visiting scholar for 15 years, told his interlocutor that he had nowhere else to leave the car and a plane to catch in four hours, he was told: “That’s your problem, not mine, isn’t it?”

“In the upshot, I left the car in the long-stay car-park at Ciampino [airport] and shall have to return for it before the costs mount too high,” Rist told LifeSiteNews. So far they are estimated to be  400 Euros ($446).

“I feel I have been treated with grotesque discourtesy,” he said.

LifeSiteNews has seen a communication explaining that Catholic University of America Press had rejected the book because the CUA Committee and Press believed it is “imprudent, at this time, to publish a volume” in Rist’s honor.

Dr. Trevor Lipscombe, the Director of the CUA Press, confirmed that the Festschrift had been rejected.

“I can confirm that it was indeed declined for publication by the Catholic University of America Press,” Lipscombe told LifeSiteNews by email.

“The deliberations of the editorial committee are confidential, so I am not at liberty to go into any further detail. But I will add that, at that same meeting, another project to which Professor Rist was a contributor was approved, and we are proud to be the publisher of his book Plato's Moral Realism: The Discovery of the Presupposition of Ethics.” Rist’s acclaimed Plato’s Moral Realism was published in 2012.

Rist was one of the contributors to the book Remaining in the Truth of Christ: Marriage and Communion in the Catholic Church, a volume prepared prior to the Extraordinary Synod of the Family. Although it was sent to the members of the Synod through the Vatican Post Office, most of the copies never reached them, having been intercepted by the general secretary, Cardinal Baldisseri.  Rist had contributed an essay on “Divorce and Remarriage in the Early Church”.

Among Rist’s fellow essayists in the suppressed Remaining in the Truth of Christ were Cardinals Burke,  Brandmüller, Caffarra, and Müller, as well as Archbishop Cyril Vasil’, SJ. The other scholar of Rist’s stature who signed the Open Letter to the Bishops of the Catholic Church was Fr. Aidan Nicholls, O.P.