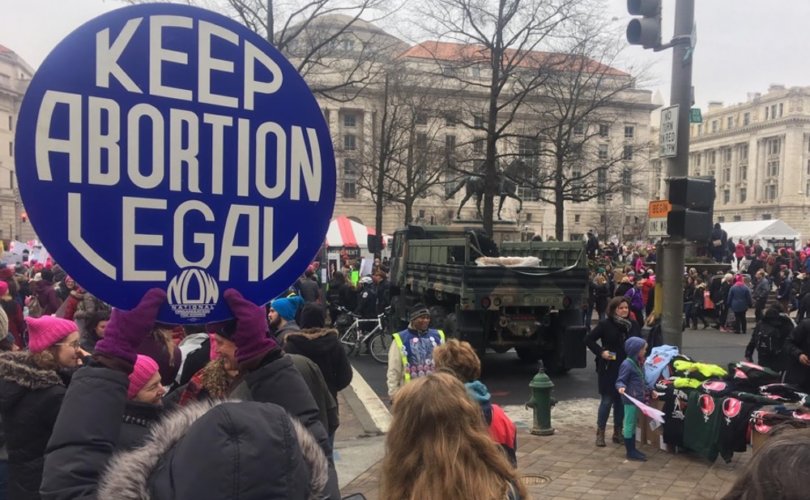 WASHINGTON, D.C., January 21, 2019 (LifeSiteNews) – It was a dreary day for D.C.’s “Women’s March,” following the previous afternoon’s sunny March for Life, and the disposition of pro-abortion participants matched the ugliness of the gray weather.

As a man stood in the middle of the protesters, declaring that each child in utero is “a unique life,” pro-abortion activists screamed, “My body, my choice,” and “No uterus, no opinion.”

A brave young woman standing on the sidewalk along the March route, holding a banner which read, “Equal rights for pre-born women,” said to the protesters, “You’re supposed to be about science and yet you reject the scientific fact that life begins at conception.”

The marchers again screamed repeatedly, “My body, my choice.”

“You say, ‘my body, my choice’ and yet you can look at these photos of these tiny torn-out babies,” countered the young woman, who pointed out, “this is not your body.”

“Every baby girl that is killed is a stolen sister,” she added, as older women filed by shouting, “Shame on you.”

Attendance at the controversial “Women’s March” has plummeted since the first march was held just two years ago. The crowd at the March for Life, though, was robust. It was possibly the most well-attended March for Life in the human rights event’s history, according to the March’s president Jeanne Mancini.

“Seriously guys, I can't even see the end of the crowd out there. This is unbelievable. It makes me nervous to say this, but, I think you might be the largest crowd ever. Literally, I just cannot see the end of you,” Mancini told pro-life marchers.

Beyond abortion, the Women’s March promoted homosexuality and transgenderism

“Together we are screaming that we are here with every part of who we are,” declared trans activist Abby Stein. “We are who we are.”

“Today is a historic day not just for me but for many trans women,” said trans-activist Bamby Salcedo. “Today trans women are visible to the whole world. We have to proudly raise our voice and say that trans women are women.”

“No one, not the government, no individuals, no companies or institutions get to dictate who we are as individuals,” continued Salcedo. “My truth is that I am a woman and that I belong here…and I thank the Women’s March for honoring that.”

A few men dressed as women then went to the podium to loudly declare “I am a woman,” as if the sheer volume of their declarations would make it so.

“Trans, intersex, gender non-conforming people are not going anywhere,” warned Salcedo. “In fact, we’re just coming to our power. So if you do not stand with us, then get out of the way.”

In a revealing display of the connection between the “Women’s March” and homosexual and transgender activists, vendors lining the streets near Freedom Plaza peddled rainbow flags – the trademark of the “gay” movement – and the softer, pastel striped flags promoting transgenderism.

“When people want to stop talking about the issues that trans women … face, we’ve got to ask them, ‘Why does that make you so uncomfortable?’” suggested Ocasio-Cortez.

“This is not just about identity, this is about justice and this is about the America we are going to bring into this world,” she added.

Rep. Alexandria Ocasio-Cortez at the Women's March in New York: “Justice is about making sure that being polite is not the same thing as being quiet. In fact, often times, the most righteous thing you can do is shake the table.” https://t.co/knzLXDTwND pic.twitter.com/oXcsyrGb2S