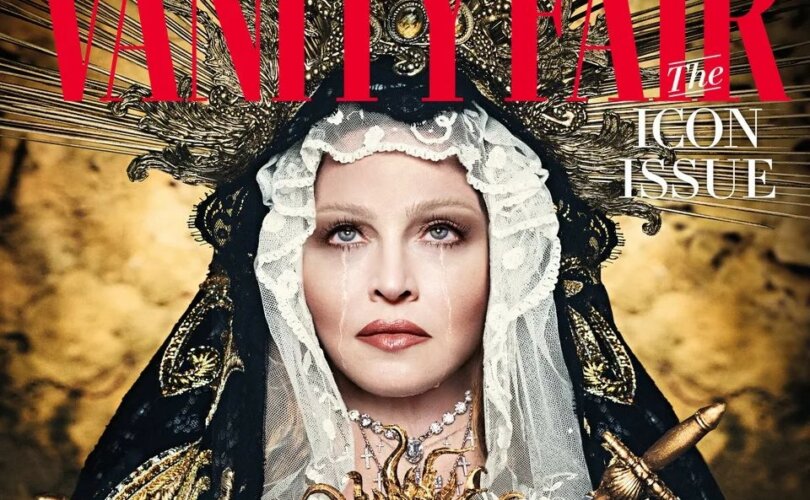 (LifeSiteNews) — In an unspeakably blasphemous photo shoot for the magazine Vanity Fair, pop star Madonna portrayed the Blessed Virgin Mary as well as “Jesus” in a version of the “Last Supper” flanked by nearly-nude women, one obscenely posed.

In a first-ever European “Icon” issue, the “Queen of Pop,” Madonna, 64, was dressed as Our Lady of Sorrows for Vanity Fair’s cover photo, wearing traditional veils, a gilded headpiece, and emblazoned with the image of a “heart” pierced by seven swords.

To coincide with the news, Madonna is also on the cover of three different issues of “Vanity Fair”, in the guise of the Virgin Mary, complete with black and white lace veils and a bleeding heart; inside the magazine she appears in a re-creation of “The Last Supper.” pic.twitter.com/WXhEilw5SQ

The Catholic devotion to the seven sorrows of Mary dates back centuries and is considered a powerful devotion by the exorcist Father Chad Ripperger and other priests and lay Catholics.

Madonna has been known for sacrilegiously appropriating Catholic themes since the beginning of her career, and her latest photo shoot is proof of her continued penchant for desecration and mockery of Christianity.

In further blasphemous photos featured in the magazine, Madonna posed as Christ at the “Last Supper,” swathed with a red stole and draped in rosary beads, hands and eyes upraised in one pose, as if praying. She is surrounded by women, some half-undressed, posing as stand-ins for Christ’s 12 apostles, as suggested by photography duo Luigi & Iango.

In another “Last Supper” shot, one of the models beside Madonna poses provocatively while half-naked, as Madonna holds up what appears to be bread, in a mockery of Christ’s Last Supper offering, as recounted in Scripture.

The photo shoot’s horrors don’t stop there. In one extremely disturbing photo, Madonna is wearing severed baby doll heads and body parts on her head, neck, bodice and skirt area while flanked by two creepy, masked, androgynous-looking models. A severed baby doll head and its body sit at the feet of a statue bust.

“These people and that whole industry is utterly demonic,” noted Paul Joseph Watson in a post of Madonna’s photo shoot to Twitter.

AllAfrica reported earlier this month that the Ethiopian World Federation is asking Malawi leader, President Lazarus Chakwera, to look into the integrity of Madonna’s Malawi charity, Raising Malawi, over concerns that, before adopting a child from Malwai, she wrote a book in 1992 called ‘SEX’ that “features adult content including softcore pornography and simulations of sexual acts including sadomasochism.”

Asked about her “relationship with religion” in an interview accompanying the photo shoot, Madonna ironically said she believes “Religion is respecting other religions.”

“Religion is not joining an exclusive or extremist group,” Madonna said before going on to vaguely elaborate on her version of religion, saying she “Cultivate[s] … spiritual practices. Practices that apply to me and don’t have to apply to everyone. And I think everyone should do that because I find it important to pray and have a connection with the soul, with the spiritual force, call it what you will.”

This is not the first time Vanity Fair has sparked outrage over its content. In 2008, the magazine was under fire for having then-15-year-old Miley Cyrus pose topless, wrapped in a bedsheet, in a cover photo for the magazine.

The magazine also infamously featured Bruce Jenner as a “woman” named “Caitlyn” in a 2015 issue.

Complaints and feedback to the editor of Vanity Fair can be sent along with a name, address, and daytime phone number to the email [email protected]