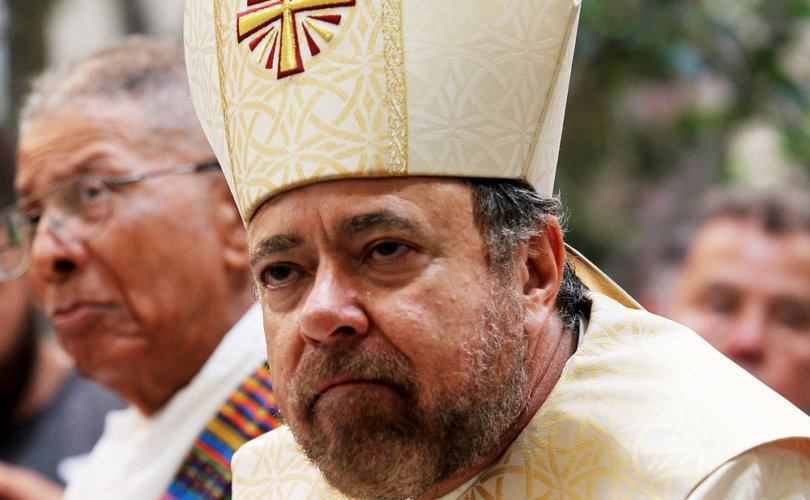 LOS ANGELES, California, December 19, 2018 (LifeSiteNews) – The Vatican announced today that Pope Francis has accepted the resignation of a Los Angeles auxiliary bishop after allegations he sexually abused a minor were found “credible.”

Bishop Alexander Salazar, 69, has been accused of misconduct with a minor when he was serving as a parish priest in the 1990s. According to the Los Angeles Archbishop Jose Gomez, the archdiocese became aware of the allegation in 2005, a year after Salazar’s episcopal ordination.

“Although the allegation was never directly reported to the Archdiocese, it was investigated by law enforcement in 2002 and the District Attorney did not prosecute,” wrote Gomez.

Since Salazar was a bishop when the allegation came to light, the archdiocese “referred the matter to the Congregation for the Doctrine of the Faith at the Holy See, which conducted an investigation and imposed certain precautionary measures on the ministry of Bishop Salazar,” Gomez continued.

Subsequently, Gomez related, he sent the case to the Archdiocese of Los Angeles’s “Clergy Misconduct Oversight Board.” The Board found the allegation credible, and Gomez sent the file with his own recommendations to the Holy See.

Salazar has never admitted to wrongdoing.

Canon lawyer Kurt Martens asked over social media why the resignation didn’t happen much earlier and also what the nature of the “misconduct” was.

“Then why now this resignation? Why did that not happen (much) earlier? What has changed? And what was the nature of the misconduct? Transparency means that these questions are answered too. @ArchbishopGomez leaves these questions unanswered in his letter to the faithful,” Martens wrote on Twitter.

Martens is an Ordinary Professor of Canon Law at Catholic University of America. He also linked to a Crux article published today about the definition of “credible accusation.”

A former executive director of the United States Catholic Conference of Bishops’ (USCCB) Office of Child Protection, Kathleen McChesney, told Crux that “generally ‘credible’ means the allegation could have taken place in terms of individuals involved, location, date, and plausibility.”

“Other dioceses use ‘plausible’ as the definition, which is similar,” McChesney explained.

“Some dioceses consider credible allegations to be ‘more likely true than not’ while others look for more certainty, in other words, that the facts presented are ‘beyond a reasonable doubt,’ ‘established’ – meaning proven or admitted,” she continued.

“Also, some dioceses will not consider an allegation credible if the offender died before he was accused.”

Bishop Salazar was ordained in 1984 and then served as an associate pastor at St. Gregory the Great in Whittier, Assumption of the Blessed Virgin Mary in Pasadena, and St. Vibiana in downtown Los Angeles. He was the pastor of St. Teresa of Avila in Silverlake from 1995 to 2004. A native of Costa Rica, he moved with his family to Los Angeles as a boy.

LifeSiteNews contacted the Media Relations office of the Archdiocese of Los Angeles, but was unable to reach a spokeswoman by phone or email before this story went to press.