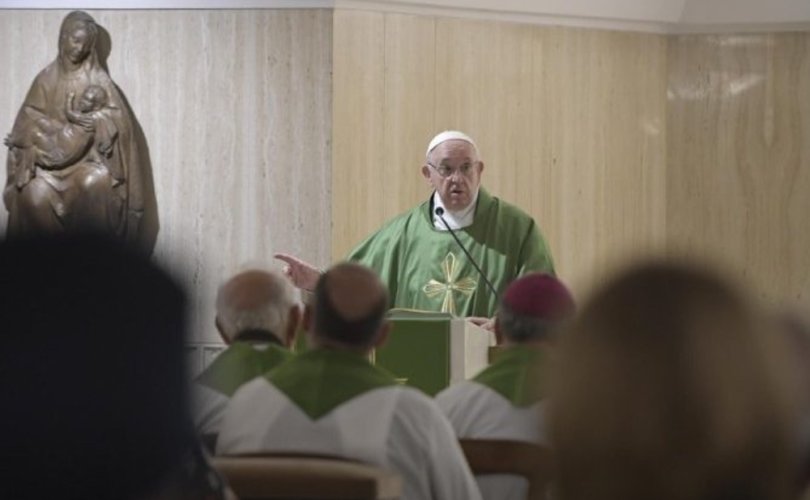 VATICAN CITY, October 16, 2018 (LifeSiteNews) – Pope Francis had harsh words in his homily today for “rigid” Christians and, presumably, journalists who are “paid to give bad news” that “smears others.”

In a scathing sermon against hypocrisy, Pope Francis declared that hypocrites are “capable of paying to kill or calumniate; as happens every day. It happens today: they are paid to give bad news, news that smears others.”

Pope Francis has received much negative press attention of late, largely due to his handling of the ongoing clerical sexual abuse crisis and episcopal cover-up, as well as his handling of a recent allegation from Vatican whistleblower Archbishop Carlo Maria Viganò that the pontiff knowingly promoted an American cleric guilty of sexual misconduct.

The pontiff also took aim at “rigid” Christians” who present themselves as “perfect”:

“Be careful around those who are rigid,” he said. “Be careful around Christians – be they laity, priests, bishops – who present themselves as so 'perfect,' rigid. Be careful. There’s no Spirit of God there. They lack the spirit of liberty. And let us be careful with ourselves, because this should lead us to consider our own life. Do I seek to look only at appearance, and not change my heart? Do I not open my heart to prayer, to the liberty of prayer, the liberty of almsgiving, the liberty of works of mercy?”

The Pope’s words against rigid Christians come during the Youth Synod, where Church leaders from around the world are now meeting in Rome to ostensibly discuss “Young People, the Faith and Vocational Discernment.” But with the inclusion of the term “LGBTQ” in the working document, pro-family leaders raised the alarm that the synod was being manipulated from within to promote positions contrary to authentic Catholic teaching. Small groups within the Youth Synod have already called for the Church to recognize “other forms of family” and to pay more attention to homosexuals and the “realities” they face, specifically mentioning “marriage,” surrogate pregnancy, and adoption.

According to the Holy See’s own “Vatican News”, Pope Francis based his homily on today’s Gospel, in which Jesus goes to supper at a Pharisee’s home and his host is “amazed” when He does not perform the prescribed ritual washing.

The pontiff contrasted the love of Jesus’ followers with the hatred of the “doctors of the Law” who tried to catch him in error and were shocked when he seemed to breach Mosaic law:

“They were truly an example of formality. But they lacked life. They were, so to speak, “starched.” They were rigid. And Jesus knew their soul,” Francis said.

“This scandalizes us, because they were scandalized by the things Jesus did when He forgave sins, when He healed on the Sabbath,” he continued.

“They rent their garments: “Oh! What a scandal! This is not from God, because He should have done this” [instead]. The people didn’t matter to them: the Law mattered to them, the prescriptions, the rubrics.”

Rubics, properly speaking, are the instructions for a priest’s actions during the Roman Catholic Mass. They are called “rubrics” because they printed in red ink; “ruber” is Latin for “red”. The spoken texts are in black. As a protest against a post-1965 tendency among Catholic priests to insert their own distracting innovations into the Mass, some tradition-minded Catholics have adopted the motto “Say the black, do the red.”

In the Gospel story, Jesus contrasts the purification rituals of the Pharisees with their inner evil in no uncertain terms. Francis took special note of the insults employed.

“They are not beautiful words, eh? Jesus spoke clearly. He was not a hypocrite. He spoke clearly,” the pontiff said.

“And he said to them, ‘But why do you look at what is external? Look at what is within,’” Francis continued.  “Another time He said to them, ‘You are whitened sepulchres.’ Nice compliment, eh? Beautiful on the outside, all perfect… all perfect… but within, full of rottenness, therefore of greed, of wickedness, He says. Jesus distinguishes between appearances and internal reality. These lords are ‘doctors of appearances’: always perfect, always. But within, what is there?”

“But always, under or behind rigidity, there are problems, grave problems,” he declared. “We intend to have the appearance of being a good Christian; we intend to appear a certain way, we put make-up on our souls. However, Pope Francis said, behind these appearances, “there are problems. Jesus is not there. The spirit of the world is there.”

Pope Francis has condemned “rigid” Christians before, numbering among them young people who love the traditional Latin Mass, and is so well-known for his harsh and colorful insults that early in his pontificate he inspired an online compilation called “Pope Francis’ Little Book of Insults”.

Steven Lane indicated that some people close to Francis might find Saint Ignatius of Antioch rather rigid:

“St. Ignatius of Antioch's rigidity:,” he tweeted, “‘For some are in the habit of carrying about the name [of Jesus Christ] in wicked guile, while yet they practice things unworthy of God, whom ye must flee as ye would wild beasts. For they are ravening dogs who bite secretly.’”

Lane also observed that St. Paul might be considered “rigid.”

“+McCarrick was the very opposite of rigid,” he tweeted. Any problems there? Might a bit of the old religious rigidity known as 'self-denial', especially in the area of his passions, have helped a little? +McCarrick let it all hang out. Now victims and many souls pay the price!”

Beverly Stevens, the editor of Regina Magazine, told LifeSiteNews that she did not know what Pope Francis’ means by “rigid” but that she sees a pattern in the pontiff’s homilies.

“I have noted a correlation between his broadsides and negative media reports appearing,” she said. “The last days of the Nixon White House come to mind.”