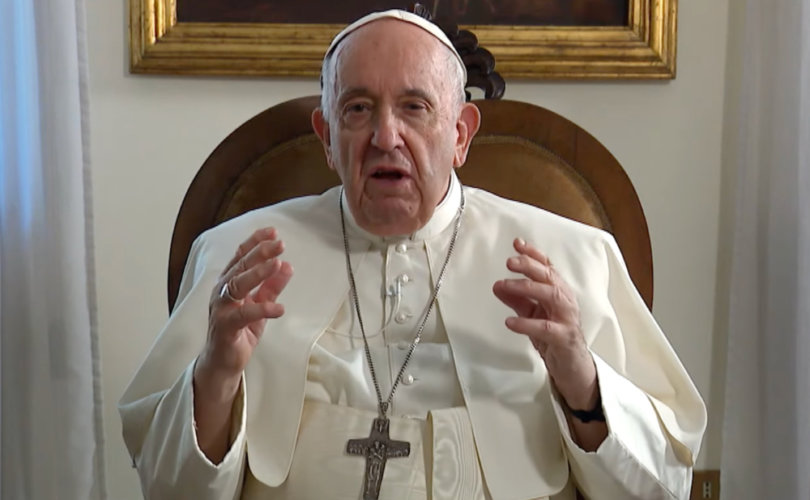 VATICAN CITY (LifeSiteNews) — Pope Francis has called for Catholics to pray for an end to the death penalty, saying that “in the light of the Gospel, the death penalty is unacceptable,” despite the Catholic Church’s nearly 2,000-year teaching, Tradition, and contents of Sacred Scripture all upholding the legitimacy of the death penalty.

“Let us pray that the death penalty, which attacks the dignity of the human person, may be legally abolished in every country,” stated Pope Francis, in his September video released as part of the “Pope Video” project, which has a new video and prayer intention every month.

Francis stated that the “Church” sees the “growing” opposition to the death penalty as “a sign of hope.” (See the full text below, as well as in the subtitles of the video above.)

“From a legal point of view, it is not necessary,” he added, saying that “capital punishment offers no justice to victims, but rather encourages revenge.”

The Argentine Pontiff continued by stating that “the death penalty is morally inadmissible, for it destroys the most important gift we have received: life.”

Francis has already made such arguments when he made groundbreaking changes to Pope John Paul II’s catechism in 2018, declaring that the death penalty “is inadmissible because it is an attack on the inviolability and dignity of the person.”

This theme he repeated in his latest video address, arguing that the death penalty is also “unacceptable” (inadmissible).

And in the light of the Gospel, the death penalty is unacceptable. The commandment, “Thou shalt not kill,” refers to both the innocent and the guilty…

Let us pray that the death penalty, which attacks the dignity of the human person, may be legally abolished in every country.

The video was released in conjunction with U.S.-based Catholic Mobilizing Network, a lobbying group opposed to the death penalty. The organization’s executive director, Krisanne Vaillancourt Murphy, added her voice to Francis’s, saying that his “prayer intention reminds us that capital punishment continues cycles of harm and violence and perpetuates a throwaway culture.”

“Ending the death penalty is within reach, and it’s one clear way we can build a culture of life,” she said.

The full text of his address is found below:

Each day, there is a growing “NO” to the death penalty around the world. For the Church, this is a sign of hope. From a legal point of view, it is not necessary.

Society can effectively repress crime without definitively depriving the offenders of the possibility of redeeming themselves. Always, in every legal sentence, there must be a window of hope.

Capital punishment offers no justice to victims, but rather encourages revenge. And it prevents any possibility of undoing a possible miscarriage of justice.

Additionally, the death penalty is morally inadmissible, for it destroys the most important gift we have received: life. Let us not forget that, up to the very last moment, a person can convert and change.

And in the light of the Gospel, the death penalty is unacceptable. The commandment, “Thou shalt not kill,” refers to both the innocent and the guilty.

I, therefore, call on all people of goodwill to mobilize for the abolition of the death penalty throughout the world. Let us pray that the death penalty, which attacks the dignity of the human person, may be legally abolished in every country.

Doubling down on Catechism changes

While Pope Francis alluded to both the Gospel and the “Church” in referencing opposition to the death penalty, the accompanying press release was only able to point back to a 1999 homily which Pope John Paul II gave when in St. Louis, as the oldest reference. Francis quoted from both of his predecessors – John Paul II and Benedict XVI – who had issued their own calls to “end the death penalty.”

However, while they did so when giving personal opinions, not magisterial teaching, it was Francis who made the biggest attack on the consistent teaching of the Church in 2018. In changing the text of the Catechism of the Catholic Church (CCC), scholars argued that Francis went against the consistent teaching of “Sacred Scripture, Sacred Tradition, and the Magisterium of the Church”  which “for 2,000 years have upheld the intrinsic legitimacy of the death penalty for grave crimes against the common good of Church or State.”

READ: Pope’s change to Catechism contradicts natural law and the deposit of Faith

“There had never been any doubt in the minds of anyone on this subject,” wrote Thomistic theologian Dr. Peter Kwasniewski at the time. (The CCC itself has earned criticism for focussing particularly heavily on ecumenism instead of doctrine, and presenting a fundamental shift in focus of Catholic morality.)

Less than a year later, Francis redoubled his personal attacks on the death penalty, sending a video message to the 7th World Congress Against the Death Penalty calling it “a serious violation of the right to life that every person has.”

Pope Francis’s arguments against the death penalty come in complete opposition to the writings, teaching, and statements of theologians, saints, and the magisterium throughout the history of the Church, as scholars – such as Edward Feser and Joseph Bessette, joint authors of By Man Shall His Blood Be Shed: A Catholic Defense of Capital Punishment – have extensively pointed out.

It is even against the words of Scripture, for in the book of Genesis capital punishment is permitted precisely because murder violates man’s dignity as being made in the image of God: “whosever shall shed man’s blood, his blood shall be shed: for man was made to the image of God.” (Gen 9:6)

— Article continues below Petition —
PETITION: We won't give any money to liberal bishops who attack the Faith
Show Petition Text
10240 have signed the petition.
Let's get to 12500!
Thank you for signing this petition!
Add your signature:
Show Petition Text

This teaching is further proposed by St. Thomas Aquinas, who drew from Scripture himself to teach that the common good is protected, and justice preserved, by observing the death penalty. (Summa Theologiae, 2a 2ae, q64, a2 & a3).

Avery Cardinal Dulles stated in 2004 that “the reversal of a doctrine as well established as the legitimacy of capital punishment would raise serious problems regarding the credibility of the magisterium…the previous teaching had been discarded, doubt would be cast on the current teaching as well.”
In the book-length interview Diane Montagna conducted with Bishop Athanasius Schneider – Christus Vincit: Christ’s Triumph over the Darkness of the Age – the auxiliary bishop taught that:

Those who deny the death penalty in principle implicitly or explicitly absolutize the corporal and temporal life of man. They also deny to some extent the consequences of original sin. Those who deny the legitimacy of the death penalty also implicitly or explicitly deny the need and value of expiation and penance for sins, and especially for monstrous crimes still in this earthly life.