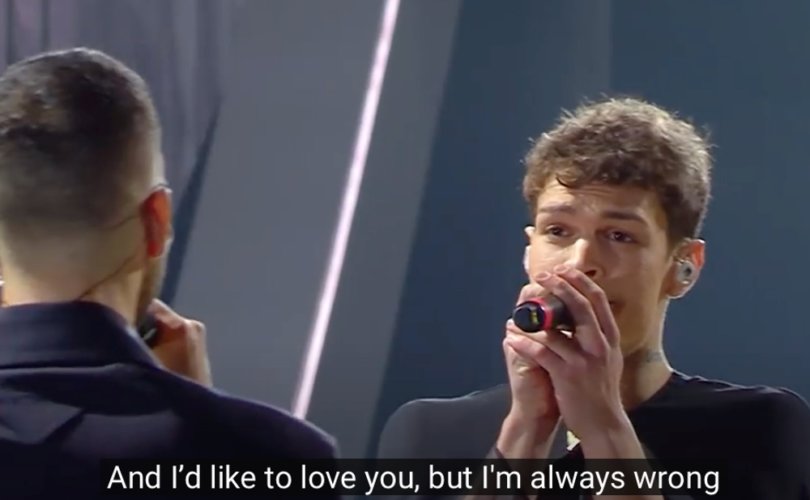 VATICAN CITY (LifeSiteNews) — The Vatican hosted an Easter Monday papal concert for young people featuring a singer who won a contest with an homoerotic pop song.

The main singer for the concert was the teenage “gay icon” Blanco (born Riccardo Fabbriconi), who won the Sanremo 2022 music festival with the sexually suggestive song “Brividi” (“Chills”), which he sang as a duo with a 29-year-old man. The Easter Monday event, at which Pope Francis appeared, was sponsored by the Italian Bishops’ Conference. Held in St. Peter’s Square on April 18, the concert drew an estimated 80,000 young people from around Italy.

According to European news agency Eurovisionfun, Don Michele, head of the Italian Bishops’ Conference’s national office for youth ministry, said of the concert, “With the pilgrimage of teenagers to Rome and their meeting with the Pope, we want to encourage and give signs of hope to those who are committed to the growth of teenagers and to those who look to the Christian community as the custodian of a future of life that comes from faith in the risen Jesus.”

However, Carlos Esteban, a journalist for the Spanish news agency Infovaticana, sharply criticized the event as an attempt to draw failing crowds back to St. Peter’s Square for papal appearances. Esteban said that the Italian Bishops’ Conference invitation to, and sponsoring of, a concert with Blanco, whose fame rests upon his promotion of immoral sexual lifestyles, could not be more scandalous. The Spanish journalist called this “the worst possible” solution.

“We are in the century of the image, in the age obsessed with what it looks like, with how it looks, with the impression it gives,” Esteban wrote. “And not a few in the Vatican worry about those growing gaps in St. Peter’s Square when the Pope appears in the Vatican ‘loggia’.”

“The solution?” he continued. “The worst possible one: to bring someone capable of attracting masses of young people and then have the Pope come, as if the successor of St. Peter were the ‘opening act’ of a rock concert. The chosen one is the very young Blanco, the … singer of the moment, who at the prestigious Sanremo Festival rose to fame with a defense of sexual activity, ‘Brividi’.”

Esteban expressed the profound disappointment in the Vatican’s attempt to appeal to the next generation.

“We would like to think that the singer’s inclinations were not even considered, and they simply looked for the character with the greatest appeal among young people. But the message of the stunt, even without the LGTBQ aspect of the affair, could not be more depressing,” he wrote.