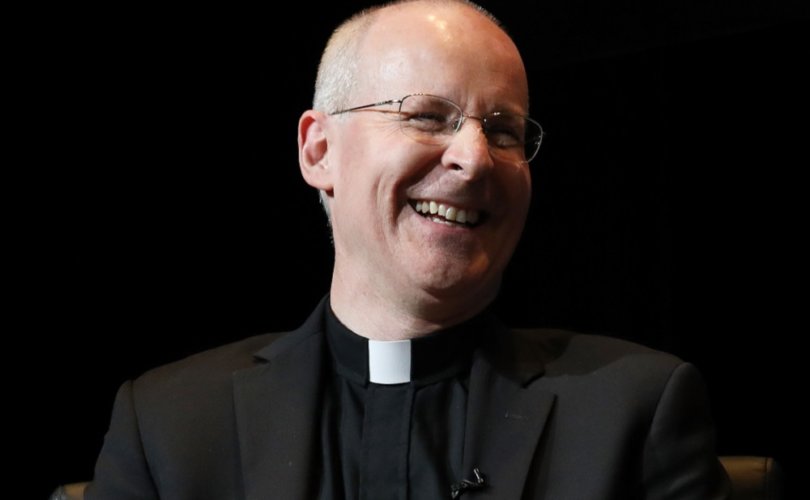 VATICAN CITY (LifeSiteNews) — The prominently pro-LGBT Jesuit Father James Martin has announced Pope Francis has re-appointed him to another five-year term as a consultor for the Vatican’s Dicastery for Communication.

“I’m happy to share the news that the Holy Father has re-appointed me to another five-year term as a consultor for the Vatican’s Dicastery for Communication,” Martin wrote on Twitter. “I’m honored by the appointment and so much enjoy working with the Dicastery.”

The letter was signed by Cardinal Secretary of State, Pietro Parolin, on March 21, 2022, but Martin wrote he was only allowed to release the news August 25.

Dear friends: I’m happy to share the news that the Holy Father has re-appointed me to another five-year term as a consultor for the Vatican’s Dicastery for Communication. I’m honored by the appointment and so much enjoy working with the Dicastery. (The letter is dated March but.. pic.twitter.com/ItouNlKcQa

Martin was first appointed by the Pope as one of 12 consultors who advise the Dicastery for Communications in April 2017, and the Vatican then invited him to speak at the 2018 World Meeting of Families in Dublin on “Exploring how Parishes can support those families with members who identify as LGBTI+.”

Francis and Martin met privately in September 2019, in what was reportedly already their third meeting, although their first substantial conversation. Both Martin, and America Magazine of which he is an “editor-at-large,” proclaimed the meeting as being “a public sign” of the pontiff’s “support” for Martin’s work promoting LGBT ideology in the name of Catholicism.

America wrote at the time that Martin first briefly met with Francis in 2016.

One Twitter user quipped in response to Martin’s recent announcement, “Congrats! It was your recent tweet minimizing pedophilia and defending a homosexual bishop that clinched it. Keep up the great work!” Martin had recently deleted his social media posts praising the notorious late Archbishop Rembert Weakland, who covered up child sex abuse and had a homosexual partner, after facing scrutiny and backlash online.

While Martin is entering another term in the Dicastery for Communications, he has a longstanding record of promoting LGBT ideology in dissent from Catholic teaching, and is described as “arguably the most prominent activist” in the Church for LGBT issues.

— Article continues below Petition —
Pope Francis: Don't make Bishop McElroy a cardinal - he knew about McCarrick
Show Petition Text
12689 have signed the petition.
Let's get to 15000!
Thank you for signing this petition!
Add your signature:
Show Petition Text

Among his most notorious actions, Martin has promoted an image drawn from a series of blasphemous, homoerotic works, showing Christ as a homosexual, promoted same-sex civil unions, and has described viewing God as male as “damaging.”

Martin has also been condemned by former Archbishop of Philadelphia Charles Chaput as not speaking “with authority on behalf of the Church.” Due to the “confusion caused by his statements and activities regarding same-sex related (LGBT) issues,” Chaput further urged “caution [to] the faithful about some of his claims.”

Today’s news comes in the wake of increased support from Pope Francis for Martin’s dissident pro-LGBT activities in the past few years. Notably, this year alone, Francis has sent two letters to Martin and his LGBT Outreach group, with the first being a hand-written note while he was still recovering from surgery.

In May, Outreach announced that Francis had responded to a letter sent him by Martin on May 5, asking the Pope questions often posed by “LGBTQ Catholics.” Francis took just three days to respond, sending a hand-written message on May 8, only days after having undergone knee surgery on May 3.

The Pontiff decried what he styled as “rejection from the Church,” saying that for supposedly LGBT individuals “I would have them recognize it not as ‘the rejection of the church,’ but instead of ‘people in the church.’ The church is a mother and calls together all her children.”

The letter was used in a PR campaign to officially launch Outreach.

Martin then publicized a second letter from Francis earlier this month, after the Pope praised Martin’s pro-LGBT conference held in June. The event featured a range of pro-LGBT speakers advocating positions contrary to the Catholic Church’s teaching on homosexuality, but Francis praised Martin for “working in the culture of encounter,” which, he said, “shortens distances and enriches us with our differences, just as Jesus did.”

Of late, Francis has also made a number of statements in support of dissident nun Sister Jeannine Grammick and her previously condemned pro-LGBT group New Ways Ministry. Grammick is a collaborator with Martin in Outreach.

Pope Francis’ signaled support for pro-LGBT activism contrary to the teachings of the Catholic Church appears to grow ever stronger.