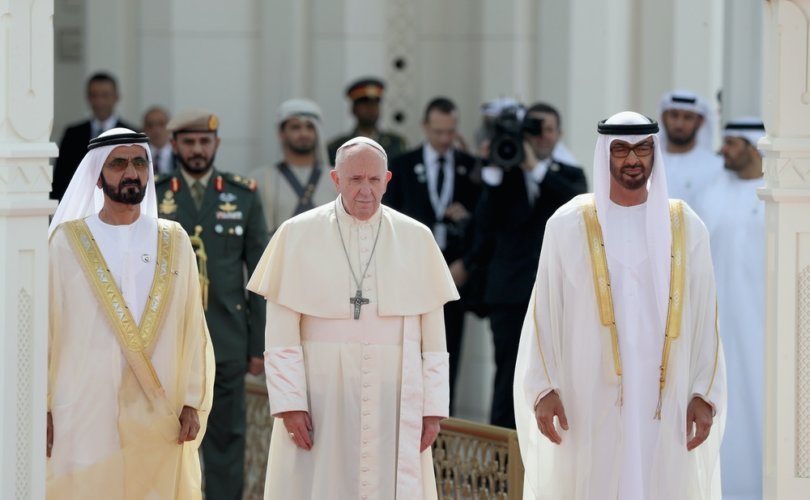 PETITION: Catholics call on the Vatican to affirm all salvation comes through Jesus Sign the petition here.

May 4, 2020 (LifeSiteNews) – As an answer to the coronavirus crisis, a call for a global interreligious day of fasting and prayer on May 14 has just been launched by the Higher Committee of Human Fraternity, aimed at all believers of all religions. The appeal was approved on Sunday both by Pope Francis and U.N. Secretary General Antonio Guterres. If this is not an actual global unified religion in action, it is beginning to look more and more like it.

The call for prayer, fasting, and “good deeds” for an end to the pandemic speaks not of man’s waywardness and disregard of divine law, nor of a call to penance and search for the true God: only for inspiration for a “cure,” that God –whomsoever He may be – should “rescue us all from this adversity.” It is, in fact, completely consensual.

It asks for “security, stability, healthiness and prosperity, so that, after this pandemic is over, our world will become a better place for humanity and fraternity than ever before.” All of these are good in themselves, but the vision is purely horizontal, focused on a better “here and now” and oblivious of God’s reality as the Most Holy Trinity, and man’s true, eternal destination, his salvation for which Jesus Christ became man and was crucified. But then again, Jesus Christ is also totally absent from this global prayer call.

The Higher Committee of Human Fraternity which issued the call was established in August 2019, following the signing of the Abu Dhabi Declaration by Pope Francis and the Grand Imam of Al-Azhar Ahmad al-Tayeb. This declaration has already raised many questions because of its assertion that “the pluralism and the diversity of religions, color, sex, race and language are willed by God in His wisdom, through which He created human beings,” which is as such a heretical proposition.

The first ongoing project of the said Higher Committee, set up in the United Arab Emirates with the support of the Vatican, is the construction of the Abrahamic Family House, a multi-religious place of worship on the island of Saadiyat in Abu Dhabi, where three cubic “temples” built on exactly the same model in terms of volume and orientation will place a Christian church, a synagogue, and a mosque side by side at the points of a triangle, on an equal footing.

The May 14 prayer day will mark a new stage in this search for universal brotherhood that borrows its vocabulary from Freemasonry. In the name of the good of humanity in a health crisis that has already been turned into a health dictatorship, it constitutes a call to erase the differences between the religions.

It fits. Since the beginning of the Chinese coronavirus pandemic, mainstream voices have been raised, telling us that we were moving towards a new civilization of empathy and solidarity.

The official Vatican news bulletin published the statement of the Higher Committee of Human Fraternity on Saturday. Be it a coincidence or not, the interreligious day of prayer will take place on the precise day – May 14 – on which the Global Compact on Education was to be signed in Rome under the auspices of Pope Francis, before being postponed until next October. That project also touts a new “humanism” in cooperation with other religions.

Through the coronavirus crisis and the common prayer call from a Committee uniting the so-called “Abrahamic religions,” global spirituality is even more clearly at the fore.

The call of the Higher Committee for Human Fraternity, as approved by members of the hierarchy of the Catholic Church, is a short communiqué calling for a prayer to God, “the All-Creator,” “for humanity” – but not to the One and Triune God whom we adore. Here below is the full text of the statement:

Dear fellow believers in God, the All-Creator, our brothers and sisters in humanity everywhere,

Our world is facing a great danger that threatens the lives of millions of people around the world due to the growing spread of the coronavirus (COVID-19) pandemic. While we reaffirm the role of medicine and scientific research in fighting this pandemic, we should not forget to seek refuge in God, the All-Creator, as we face such severe crisis. Therefore, we call on all peoples around the world to do good deeds, observe fast, pray, and make devout supplications to God Almighty to end this pandemic. Each one from wherever they are and according to the teachings of their religion, faith, or sect, should implore God to lift this pandemic off us and the entire world, to rescue us all from this adversity, to inspire scientists to find a cure that can turn back this disease, and to save the whole world from the health, economic, and human repercussions of this serious pandemic

As part of its efforts to realize the objectives of the Document on Human Fraternity, the Higher Committee of Human Fraternity suggests announcing Thursday May 14th, 2020, a day for fasting, prayers, and supplications for the good of all humanity. As such, the Committee invites all religious leaders and peoples around the world to respond to this call for humanity and together beseech God Almighty to safeguard the entire world, to help us overcome this pandemic, to restore security, stability, healthiness, and prosperity, so that, after this pandemic is over, our world will become a better place for humanity and fraternity than ever before.

Yes, that is what is sought: not a world that repents of evil and unites in truth under the gentle reign of Our Lord Jesus Christ, but a new world, that will have found unity in resisting the “invisible enemy” of the coronavirus, and praying together to any deity. No one is excluded. Anything can be believed. Whether you are a satanist, an Islamist, or a worshipper of the onion, this call is addressed to you.

The Emirati press this Sunday gave some details about the appeal of the High Committee of Human Brotherhood. May 14 should be dedicated “to fasting, works of mercy, prayers and supplications for the good of all humanity” and for the end of the pandemic, wrote Gulf News. It seems fitting indeed that it should take place in the middle of Ramadan that runs this year from April 24 to May 23, as fasting, works of mercy (“alms”), and prayer are three of the five pillars of Islam.

Gulf News did not mention the non-Islamic components of the Higher Committee, simply recalling that it was established by Sheikh Mohammed bin Zayed Al Nahyan, Crown Prince of Abu Dhabi and Deputy Supreme Commander of the Armed Forces of the United Arab Emirates.

The first personality to have approved the appeal was Sheikh Ahmed Al-Tayeb, co-signatory of the Abu Dhabi Declaration, who made known his support for the initiative through a Facebook message: “I welcome the committee’s noble humanitarian appeal to invite people around the world to pray, to beg for the good of all humanity and to do good in the name of Allah the Almighty, in order to remove this pandemic that is hitting us and the whole world,” he wrote.

It would appear that Allah does not allow himself to be supplanted.

Pope Francis quickly fell in step on Sunday, May 3, and gave his full support during the virtual global audience he gave at noon from the library of the Apostolic Palace of the Vatican, as America Magazine, the magazine of the United States Jesuits, immediately reported. The story bore the title: “Pope Francis joins Muslim leaders in calling for world day of prayer to end the coronavirus.”

The story added that the Pope reiterated the call for the inter-religious day of prayer during the same talk. Francis “endorsed the call to ‘the believers of all the religions to unite together spiritually on May 14 in a day of prayer and fasting, to implore God to help humanity overcome the coronavirus pandemic.’”

During his talk, he repeated: “Remember, May 14, all believers together, believers of the different [religious] traditions, to pray, to fast, and to do works of charity.” Mentioning the Higher Committee for Human Fraternity, Pope Francis added: “Since prayer is a universal value, I accepted its proposal.”

But praying to the true God is not the same thing as worshipping false gods, as a universal prayer initiative would imply.

UN Secretary General Antonio Guterres – former president of the Socialist International – posted a tweet on Sunday evening confirming that he too was supporting the Higher Committee’s appeal. “In difficult times, we must stand together for peace, humanity & solidarity. I join His Holiness Pope Francis (@Pontifex) and the Grand Imam of Al Azhar Sheikh Ahmed Al Tayeb in their support for the Prayer for Humanity this 14 May – a moment for reflection, hope, and faith,” he wrote.

Shortly before Easter, the same Antonio Guterres had published a policy brief on “The impact of COVID-19 on women” in which he called for full access to “sexual and reproductive health services” which in United Nations documents refers in particular to contraception and also, in coded language, to what U.N. agencies call “safe abortion.”