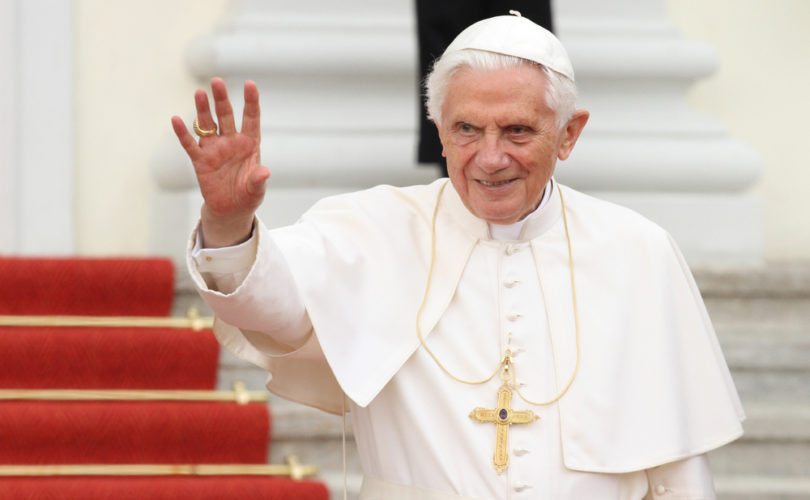 August 27, 2018 (LifeSiteNews) – Pope Emeritus Benedict has confirmed the claim that he acted during his tenure to discipline now ex-Cardinal Theodore McCarrick in response to accusations of sexual abuse, according to sources that have spoken to the National Catholic Register.

If true, the Pope Emeritus’ confirmation that he knew about McCarrick and sought to punish him lends strong weight to the claim that Pope Francis knew about McCarrick’s abuse but permitted him to act freely as an emissary of the Holy See and as a “kingmaker” for bishop and curial appointments in the Francis papacy.

Although Benedict reportedly cannot remember the exact nature of the punishment he imposed on McCarrick, he recalls having instructed Cardinal Bertone, his then Secretary of State, to impose “measures” against the cardinal in response to the allegations against him of homosexual predation against seminarians and adolescents.

“The Register has independently confirmed that the allegations against McCarrick were certainly known to Benedict, and the Pope Emeritus remembers instructing Cardinal Bertone to impose measures but cannot recall their exact nature,” the publication states in a widely overlooked passage in its original article on the scandal published on Saturday. The Register does not reveal its sources for this information.

The affirmation comes in the wake of allegations made on Saturday by Archbishop Carlo Maria Viganò, former Apostolic Nuncio in the United States, that Pope Benedict had imposed severe penalties on Cardinal McCarrick years before Francis became pope, forbidding him to celebrate Mass in public, to participate in public meetings, to give lectures, and to travel, “dedicating himself to a life of prayer and penance.”

In his written testimony on the affair, simultaneously published by LifeSiteNews.com and the National Catholic Register on Saturday, Viganò says that he personally knows that Pope Francis was aware of the accusations against McCarrick, because he mentioned them to the pontiff himself on two different occasions in 2013, shortly after his election, when Francis appeared to be probing him to see if he was an ally or an enemy of McCarrick.

Asked, “What is Cardinal McCarrick like?” Viganò writes, “I answered him with complete frankness and, if you want, with great naiveté: ‘Holy Father, I don’t know if you know Cardinal McCarrick, but if you ask the Congregation for Bishops there is a dossier this thick about him. He corrupted generations of seminarians and priests and Pope Benedict ordered him to withdraw to a life of prayer and penance.’”

“The Pope did not make the slightest comment about those very grave words of mine and did not show any expression of surprise on his face, as if he had already known the matter for some time, and he immediately changed the subject,” continues Viganò. “But then, what was the Pope’s purpose in asking me that question: ‘What is Cardinal McCarrick like?’ He clearly wanted to find out if I was an ally of McCarrick or not.”

Viganò states that despite Francis’ clear knowledge of McCarrick’s record of sexual abuse, McCarrick was allowed to freely travel and engage in public appearances on behalf of the Church. He also says that McCarrick became a sort of emissary and “kingmaker” during the Francis papacy, facilitating the rise of notoriously gay-friendly clergy such as Cardinals Blase Cupich, Donald Wuerl (McCarrick’s successor as Archbishop of Washington), and Joseph Tobin of Newark, McCarrick’s previous diocese before his appointment to Washington, as well as the sudden ascent of Bishop Ilson de Jesus Montanari as Secretary of the Congregation of Bishops and of the College of Cardinals.

The accusations, which also include numerous explosive claims about complicity by various cardinals, bishops, and curial officials, are being called an “earthquake” by mainstream media, and curial officials reportedly are calling it an “atomic bomb.” Bishops and other members of the Church hierarchy are calling for an investigation of Pope Francis, who is refusing to answer questions about Viganò’s testimony.

Pope Benedict’s confirmation that he gave instructions to Vatican Secretary of State Tarcicio Bertone to penalize McCarrick tends to confirm Bertone’s involvement in the case, which Viganò suspects was a cause of delays in the disciplining of the sex abuser, which did not occur until 2009 or 2010, according to Viganò.

“I believe it [the delay] was due to the Pope’s first collaborator at the time, Cardinal Tarcisio Bertone, who notoriously favored promoting homosexuals into positions of responsibility, and was accustomed to managing the information he thought appropriate to convey to the Pope,” writes Viganò.

Archbishop Viganò’s accusations have also been corroborated by the former first counsellor at the apostolic nunciature in Washington D.C., Monsignor Jean-François Lantheaume, in an interview with Catholic News Agency.