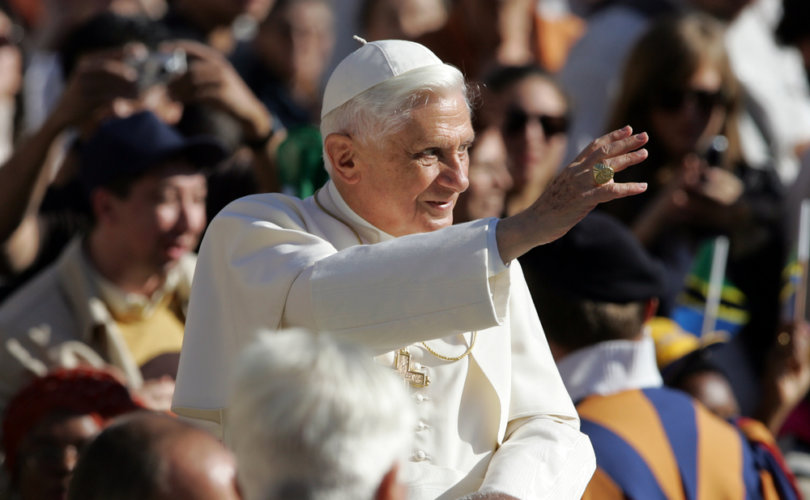 ROME, April 13, 2017 (LifeSiteNews) – Pope Emeritus Benedict XVI is aware of the controversy surrounding Amoris Laetitia, but he won't be commenting.

In a new interview, the retired pontiff's personal secretary, Archbishop Georg Gänswein, reveals that Pope Francis personally sent Pope Benedict an autographed copy of his much-criticized exhortation on the family.

“[Pope Benedict] read it thoroughly, but he does not comment in any way on the content,” Gänswein told the Italian newspaper La Repubblica, according to a translation by the National Catholic Register's Ed Pentin. Certainly he is taking note of the discussion and the different forms in which it has been implemented.”

Amoris Laetitia, which was released just over a year ago, has been interpreted differently all around the world. Some progressive prelates say it changes Church practice to allow active adulterers to receive Holy Communion, and that this is a good thing. Some orthodox prelates say a footnote – the main source of the document's controversy – can't change the Church's perennial approach to the question of divorce and remarriage. Other orthodox prelates say the footnote is incompatible with Catholic teaching.

Four cardinals sent Pope Francis a dubia, or formal request, asking him to clarify whether Amoris Laetitia is aligned with Catholic morality. Pope Francis has not yet responded, although he has given his approval to the guidelines of Buenos Aires bishops allowing Communion for the divorced and remarried. A Malta newspaper also recently reported that Pope Francis thanked the bishops of that country for their allowance of Communion for adulterers who feel “at peace with God.”

“Reading the newspapers and seeing the news, it’s not possible that Benedict doesn’t notice now and again these contrasting positions,” said Gänswein. Pope Benedict is not bothered by them, the archbishop said. “He has decided to keep quiet and stay true to this decision. He has no intention of entering controversies that feel far away from him.”

Gänswein said that Pope Benedict was “not at all” pressured to resign.

“He would not give in” had there been pressure, he said. “He had become aware of not having the strength to guide the barque of Peter which needed a strong rudder. He understood the need to give back to the hands of the Lord what he had received from Him.”

According to Gänswein, Pope Benedict is “serene, quiet, and in a good mood.” He still plays the piano, but not as well as he used to because “his hands do not obey like they used to.”

Last month, Italian Archbishop Luigi Negri, who is close to Pope Benedict, said the former pope decided to resign as a result of “tremendous pressure.”