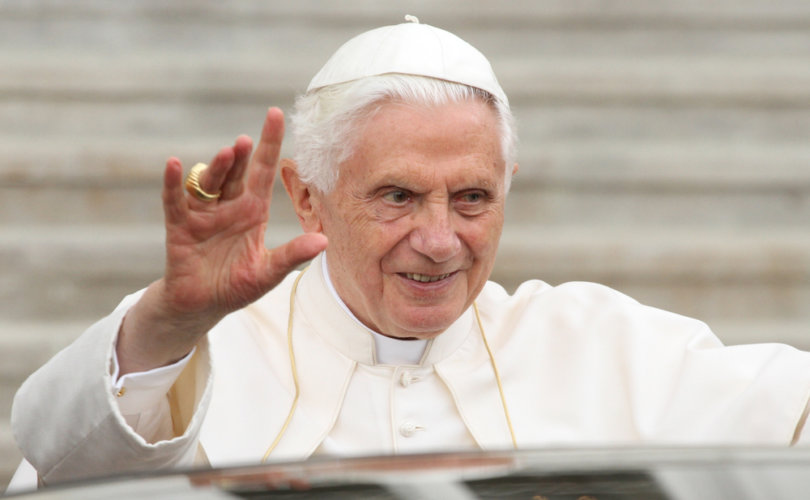 “I want the Catholic voice to be heard,” said Benedict, who resigned the papacy in 2013, but has since, on occasion, made comments to the public in written form.

In Germany, Catholic media are usually connected to the dioceses, the German Bishops’ Conference, or some other “official” institution funded by the Church Tax. For the most part, these kinds of organizations support the “progressive” agenda of normalizing homosexuality, championing women’s ordination, and abolishing priestly celibacy.

The Society of Catholic Journalists in Germany (Gesellschaft katholischer Publizisten Deutschlands GKP) issued a statement heavily criticizing the new effort by Benedict. While supporting the desire to advance Catholic journalism, the GKP showed itself “astonished” to see that Pope Benedict created “a private foundation affiliated with only one media outlet.” The GKP pointed to the Catholic School of Journalism (IFP) based in Munich. Founded in 1968, the school is financially backed by the German Bishops’ Conference.

Additionally, the GKP said that it is “odd” how “the predecessor of the Pope as the creator of the foundation wants to divert funding away from the IFP – and thus from the German Bishops’ Conference – towards one single media outlet.” It is unclear how the funding would be diverted, since neither Benedict nor the new foundation have access to funds collected through the Church Tax.

Die Tagespost goes back to the year 1948 and has remained faithful to the teachings of the Church, even when after the Second Vatican Council many publications in Germany started to pursue a more “progressive” agenda. In 2017, the newspaper was on the verge of being shut down, but has since been put on a solid financial footing.

Oliver Maksan, editor in chief of Die Tagespost, commented on the criticism by the GKP, saying, “The idea that the promotion of Catholic journalism in Germany has to run through the Catholic School of Journalism (IFP) exclusively also shows an odd understanding of independence and plurality in the field of Catholic journalism. Monopolies are never good. Neither is a conservatism of structures.”

Only days earlier, Thomas Sternberg, head of the “Central Committee of German Catholics” (ZdK), had attacked Die Tagespost as well as kath.net, a faithful news website based in Austria, saying they were “church media acting in a harsh way.” Sternberg has, among other things, demanded that homosexual unions be blessed, stating, “Behind this is the wish that God may assist the blessed.”

Maksan responded, “It’s pretty much a waste of time to respond to thought-terminating clichés. Sternberg’s statements are the transparent attempt to muzzle critics within the Church of the synodal way by placing them on the extreme right. We know this game from politics.”

The Tagespost Foundation was assigned three main tasks by the former Pope. First, its goal is to promote young journalists, for instance by restructuring the formation of journalists. Several faithful Catholic media outlets in Germany are taking part in this new endeavor, including Radio Horeb (a radio station, part of The World Family of Radio Maria), Vatican Magazin (a monthly magazine comparable to Inside the Vatican in the United States), as well as the diocese of Regensburg, headed by Bishop Rudolf Voderholzer. In other words, different media (print, radio, video, and online) are now part of a comprehensive program to form faithful Catholic journalists.

Secondly, Benedict wants the foundation to increase the reach of Catholic journalism. As young people are looking for information almost exclusively online, the foundation wants to pay for the infrastructure needed, as well as for the work of journalists to publish articles that are accessible to anyone, free of charge.

Finally, the goal is to create independence for the foundation. In other words, the foundation is looking for regular donors to finance the work it is doing. Overall, the expectation is to spend roughly 450,000 euros every single year. In a letter, Oliver Maksan explained that this amounts to only 4,500 donations of 100 euros per year.

The foundation is represented by Dr. Norbert Neuhaus, who is one of the publishers of Vatican Magazin. In addition, he is involved with another foundation directly supporting the online version of Die Tagespost. Prior to this, he worked as Secretary General for Aid to the Church in Need.

The other representative of the Tagespost Foundation for Catholic Journalism is Bernhard Müller, manager of “fe-Medienverlag,” a small but faithfully Catholic publishing house in Germany. Among its publications are the books by Robert Cardinal Sarah, Archbishop Georg Gänswein (Benedict’s private secretary), and Gabriele Kuby, whose book The Global Sexual Revolution has been published in English by Angelico Press.