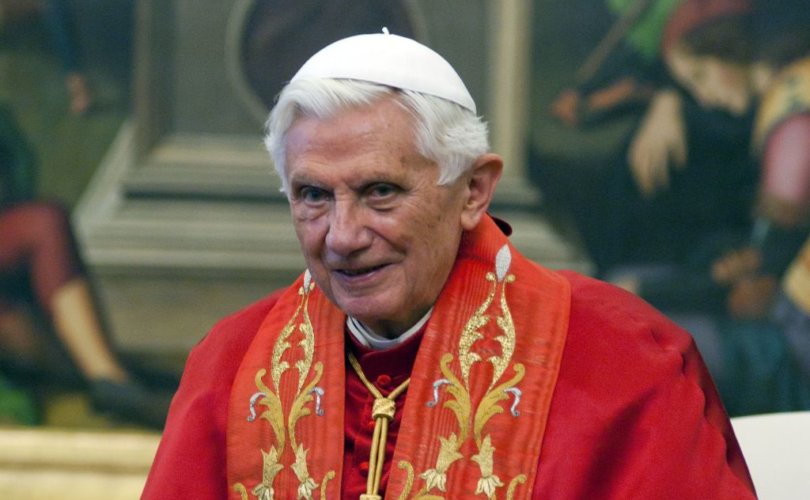 May 1, 2020 (LifeSiteNews) – Pope Emeritus Benedict XVI linked the dominance of “homosexual marriage” and “abortion” in the world — such that it brooks no dissent without fear of punishment — to the “spiritual power of the Anti-Christ” in a new biography.

“One hundred years ago,” Benedict stated in the biography by Peter Seewald, “everybody would have considered it to be absurd to speak of a homosexual marriage. Today, one is being excommunicated by society if one opposes it.” The same applies to “abortion and to the creation of human beings in the laboratory,” Benedict added.

The over 1,000-page authoritative biography, titled Benedikt XVI: Ein Leben (in German) and Benedict XVI The Biography: Volume One (in English) is scheduled for release in German May 4 and in English Nov. 17. A pre-release copy of the book was obtained by LifeSiteNews. Seewald has co-authored several books with Benedict and has also already published an autobiographical interview-book with the former Pope.

Following the death of John Paul II in 2005, Benedict, formerly known as Cardinal Joseph Ratzinger, served as pope of the Catholic Church until his surprise resignation in February 2013. Pope Francis was elected his successor in March 2013.

For this book, Seewald was able to have many exchanges with Pope Benedict as well as with his personal secretary, Archbishop Georg Gänswein. In an attachment to this new book, Seewald published answers by Pope Benedict under the title: “Last Questions to Benedict XVI.” These questions, the author explained, had been sent to Benedict after “many interviews” with him, in the autumn of 2018. Many of Seewald's questions remained unanswered, but the ones Benedict answered are found in this attachment.

When asked about the often-repeated claim that he as Pope encountered “many blockages” during his papacy on the part of the Roman Curia, Pope Benedict answered: “Blockages came more from the outside than from the Curia. I did not want merely to promote first and foremost the purification in the small world of the Curia, but in the Church as a whole.” Further explaining his thoughts, he added that “in the meantime, events have shown that the crisis of the Faith has led also especially to a crisis of Christian existence.” This, he continued, is what the “Pope has to have in front of his eyes.”

When further asked by Seewald as to whether Benedict had foreseen all that would come down upon him — the Pope, at the beginning of his pontificate, had asked Catholics to pray for him that he may not “flee from the wolves” — Benedict stated that the generally perceived scale of problems that a pope can be “afraid of” is much too “small.”

“Of course,” he went on to say, “events such as 'VatiLeaks' are a nuisance and not understandable for the people in the world at large and deeply disturbing. But the real threat to the Church and with it to the Petrine Office does not come from such things, but from the world-wide dictatorship of seemingly humanistic ideologies.” To contradict this dictatorship, Benedict explained, “means the exclusion from the basic consensus in society.”

It was within this context that Benedict mentioned “Anti-Christ.”

The Catholic Church teaches that before Christ's glorious second coming, the Church will pass through a “final trial” that will “shake the faith of many believers.”

“The persecution that accompanies her pilgrimage on earth will unveil the ‘mystery of iniquity’ in the form of a religious deception offering men an apparent solution to their problems at the price of apostasy from the truth,” states the Catechism of the Catholic Church.

“The supreme religious deception is that of the Antichrist, a pseudo-messianism by which man glorifies himself in place of God and of his Messiah come in the flesh,” it added.

Venerable Archbishop Fulton J. Sheen in a 1947 radio sermon described the Anti-Christ as a “Great Humanitarian” who will “talk peace, prosperity and plenty.”

“The anti-Christ will not be so called, otherwise he would have no followers. He will wear no red tights, nor vomit sulphur, nor carry a spear nor wave an arrowed tail as Mephistopheles in Faust,” stated Sheen.

He will come disguised as the Great Humanitarian; he will talk peace, prosperity, and plenty, not as means to lead us to God, but as ends in themselves. He will write books on the new idea of God to suit the way people live.

[He will] induce faith in astrology so as to make not the will but the stars responsible for our sins. He will explain guilt away psychologically as repressed sex, make men shrink in shame if their fellowmen say they are not broadminded and liberal.

He will identify tolerance with indifference to right and wrong. He will foster more divorces under the disguise that another partner is “vital.”

He will even speak of Christ and say that he was the greatest man who ever lived. His mission, he will say, will be to liberate men from the servitudes of superstition and Fascism, which he will never define.

In the midst of all his seeming love for humanity and his glib talk of freedom and equality, he will have one great secret which he will tell to no one; he will not believe in God. And because his religion will be brotherhood without the fatherhood of God, he will deceive even the elect.

He will set up a counter-Church, which will be the ape of the Church because, he the devil, is the ape of God. It will be the mystical body of the anti-Christ that will in all externals resemble the Church as the mystical body of Christ. In desperate need for God, he will induce modern man, in his loneliness and frustration, to hunger more and more for membership in his community that will give man enlargement of purpose, without any need of personal amendment and without the admission of personal guilt. These are days in which the devil has been given a particularly long rope.

Benedict’s comments may be his strongest condemnation of the dictatorship of moral relativism and of the LGBT agenda that has been repeatedly resisted by other high-ranking Catholic leaders, such as Cardinal Robert Sarah, Cardinal Gerhard Müller, Cardinal Raymond Burke, and Cardinal Walter Brandmüller, as well as Bishop Athanasius Schneider, among others.

It was in an April 2005 speech, just before his election to the papacy, that then-Cardinal Joseph Ratzinger had introduced the term “dictatorship of relativism.”

He told his fellow cardinals that “today, having a clear faith based on the Creed of the Church is often labeled as fundamentalism. Whereas relativism, that is, letting oneself be 'tossed here and there, carried about by every wind of doctrine', seems the only attitude that can cope with modern times. We are building a dictatorship of relativism that does not recognize anything as definitive and whose ultimate goal consists solely of one's own ego and desires.” Against this relativism, he noted, stands Jesus Christ.

Stated Ratzinger: “We, however, have a different goal: the Son of God, the true man. He is the measure of true humanism.”

In 2017, on the occasion of the funeral of Cardinal Joachim Meisner, Benedict praised the “dubia” cardinal for living out a “deep conviction that the Lord does not abandon His Church, even when the boat has taken on so much water as to be on the verge of capsizing.”

The Church, Benedict stated at that time, “stands in particularly pressing need of convincing shepherds who can resist the dictatorship of the spirit of the age and who live and think the faith with determination.”