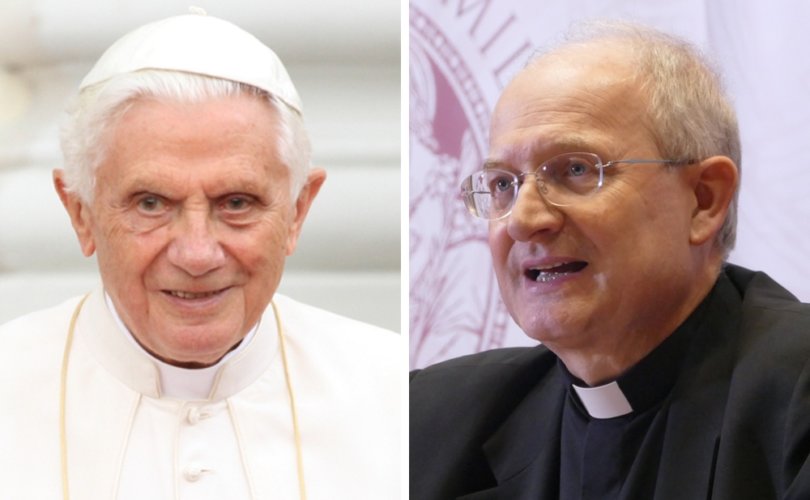 Benedict XVI met Msgr. Melina on Friday having invited him to a private audience. Sources told CNA that Benedict gave his blessing, prayers, and assurances of solidarity.

The monsignor, who had presided over the institute for ten years, was dismissed as chairman of moral theology once new statutes were promulgated. Pope Francis announced in 2017 that he was re-founding the Institute, giving it a new mission and focus. Melina had been chair of moral theology at the Institute until his dismissal. Pope Benedict was known to have been a close collaborator of the Institute.

Changes mandated by the Vatican included the dismissal of certain faculty members and the abolition of its chair of fundamental theology. In addition, the entire faculty and staff were temporarily suspended. St. John Paul II founded the school in 1981 as the Pontifical Institute for Studies on Marriage and Family. It was given the mandate by John Paul II's apostolic exhortation Familiaris Consortio to be an interdisciplinary school that focused on the Church's theology of sexuality, marriage, and family.

Controversy over the refounding of the Institute and dismissal of faculty continues. For example, a former professor at the Institute, Dr. Monika Grygiel — daughter of philosopher and friend of Pope John Paul II — recently wrote at Italian daily Il Foglio, denouncing the “terrible suppression” and “destruction” of a renowned academic community. She wrote that the “violence” of the Vatican’s “abolition” of the Institute was  “something unheard of in academia.” She added that the reformed Institute was built upon  “the injustice of dismissals, on non-existent, totally questionable or even defamatory grounds.”

Also, graduate students at the Institute are blogging their objections to the changes there, which include the dismissal of professors and elimination of courses tied to the intellectual legacy bequeathed by Pope John Paul II. On the “Gli studenti GP 2 informano” (“The students of the Giovanni Paolo 2 shall inform”) website, the students’ letter of protest can be signed by supporters who wish to show solidarity. The students objected to a July 29 press release from the Institute, which they believe did not address their concerns. Hundreds of students and alumni have signed the letter. Some say that students will not be able to complete the academic programs for which they are  enrolled, and that faculty dismissals were accomplished without due process. According to CNA, some faculty members say they do not object to Pope Francis’s plan to expand the Institute’s mission. However, they object to how new administrators are implementing the changes.

Institute vice-president Fr. José Granados told CNA last week that the identity of the institution is “seriously threatened.” Fr. Granados said that “objective problems” posed by the recent changes must be addressed, warning of the “danger” that the changes  pose “to the original mission of the Institute, which Pope Francis has clearly said he wants to preserve, not just as a piece of the past, but precisely because it is a source of renewal and a pathway for the Church’s accompaniment to families.”

Fr. Juan José Pérez-Soba, who teaches pastoral theology and moral theology at the Institute, told CNA that Fr. Melina's dismissal is a concern, saying that in light of the importance Cardinal Ratzinger — now Pope Benedict — gave to teaching fundamental morals at the Institute, “the suppression of the chair of fundamental morals and the dismissal of Livio Melina takes on new light,” he said.

“This set of changes now appears as a search to change the moral paradigm. There seems to be a desire to discard objective morality, which affirms the truth about the good to which man is called, following Veritatis splendor. And it seems intended to open a process of review of all sexual morality from subjectivism, starting with Humanae vitae,” he said.

On Saturday, the UK Catholic Herald reported that the Institute’s administrators plan to “formulate adequate responses” to the concerns this month.