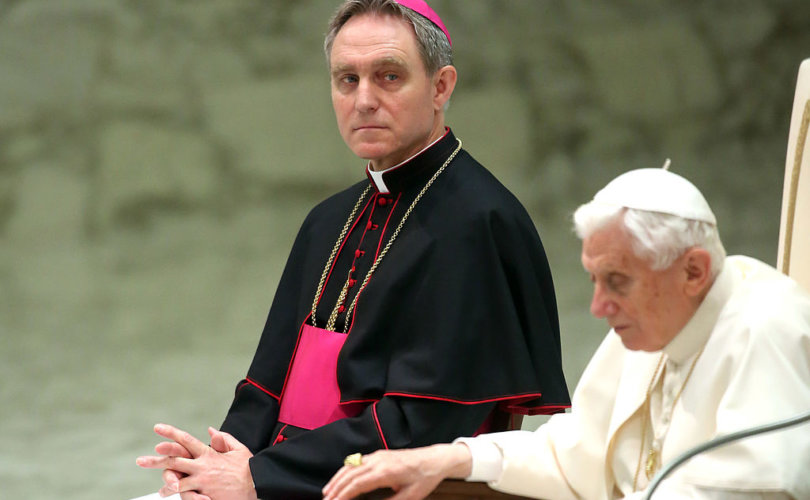 VATICAN CITY (LifeSiteNews) –– Pope Benedict XVI’s longtime secretary has revealed that the late Pontiff only learned of Pope Francis’ attack on the traditional Mass by reading about it in the Vatican’s newspaper, and that Benedict thought the measures were a “mistake.”

Archbishop Georg Gänswein, the former aide and secretary of the late Benedict XVI, has made the claim in his upcoming book Nothing but the Truth: My Life with Benedict XVI. Due to be published January 12, LifeSiteNews has obtained a copy of the book, which provides inside details of the workings of Benedict’s life after his shock resignation and the pontificate of Pope Francis.

Of particular note are Gänswein’s revelations about the implementation of Pope Francis’ July 16, 2021 restrictions on the traditional Mass, or the Latin Mass, as it is commonly known. According to Gänswein, Benedict was not warned about the motu proprio, which “abrogated” his own 2007 document Summorum Pontificum (SP) which described the Novus Ordo as the “ordinary expression” of the lex orandi, with the rite of 1962 (Latin Mass) being “never abrogated,” and “an extraordinary form.”

— Article continues below Petition —
SIGN: Show Pope Francis the Latin Mass will survive any suppression
Show Petition Text
36738 have signed the petition.
Let's get to 40000!
Thank you for signing this petition!
Add your signature:
Show Petition Text

On July 16, 2021, Benedict XVI discovered, while flipping through “L’Osservatore Romano” that afternoon, that Pope Francis had released the motu proprio Traditionis custodes on the use of the Roman liturgy prior to the 1970 reform. The subject matter was identical to that of the motu proprio Summorum Pontificum, which he had promulgated on July 7, 2007, and the mode of communication was also the same, through the accompaniment of a letter to illustrate the contents of the new text. Therefore, the Pope emeritus read the document carefully, to understand its motivation and the details of the changes.

According to Gänswein, Benedict considered the publication of Traditionis Custodes a “mistake.”

When I asked him for his opinion, he reiterated that the reigning Pontiff has the responsibility for decisions such as this and must act according to what he sees as the good of the Church. But on a personal level, he found a definite change of course and considered it a mistake, since it jeopardized the attempt at pacification that had been made fourteen years earlier.

Benedict in particular felt it was wrong to prohibit the celebration of Mass in the ancient rite in parochial churches, as it is always dangerous to corner a group of faithful so as to make them feel persecuted and to inspire in them a sense of having to safeguard their identity at all costs in the face of the “enemy.”

Traditionis Custodes was described by Francis as being written “in light of the experience” of a survey carried out by the Congregation for the Doctrine of the Faith last year, about the Latin Mass.

That survey has never been published by the CDF, nor have the results of the secret survey been disseminated to the relevant Dicasteries. Indeed, reports have stated that the survey did not call for restrictions on the traditional Mass, and that such restrictions were decided upon separately to the bishops’ survey.

Gänswein referred to this survey, highlighting Benedict’s confusion as to why the survey was not made public.

It also remained mysterious to Benedict why the results of the bishops’ consultation done by the Congregation for the Doctrine of the Faith, which would have enabled a more precise understanding of every facet of Pope Francis’ decision, were not disclosed. Similarly, it turned out to be surprising, for all the analytical and in-depth work done beforehand, the transfer and splitting of competence on the issue from the Doctrine of the Faith to the Dicastery for Divine Worship and the Discipline of the Sacraments and to that for Institutes of Consecrated Life and Societies of Apostolic Life.

Furthermore, Francis reportedly earned further private disapproval from Benedict for comments the Argentine Pontiff made regarding the use of Latin.

And even less appreciation was garnered in him by the anecdote recounted soon afterwards by the Pontiff: “A cardinal told me that two newly ordained priests came to him asking to study Latin in order to celebrate well. He, who has a sense of humor, replied, ‘But there are so many Hispanics in the diocese! Study Spanish to be able to preach. Then, when you have studied Spanish, come back to me and I will tell you how many Vietnamese there are in the diocese, and I will ask you to study Vietnamese. Then, when you have learned Vietnamese, I will give you permission to study Latin as well.’ So he “landed them,” brought them back to earth.”

Seemingly in response to this remark by Francis, Gänswein wrote that “Benedict remembered well how the Council had instead insisted that ‘the use of the Latin language, except for particular rights, be preserved in the Latin rites’.”

Benedict did not issue a public statement regarding Traditionis Custodes prior to his death.

LifeSiteNews will continue to provide coverage of Gänswein’s book over the coming days.