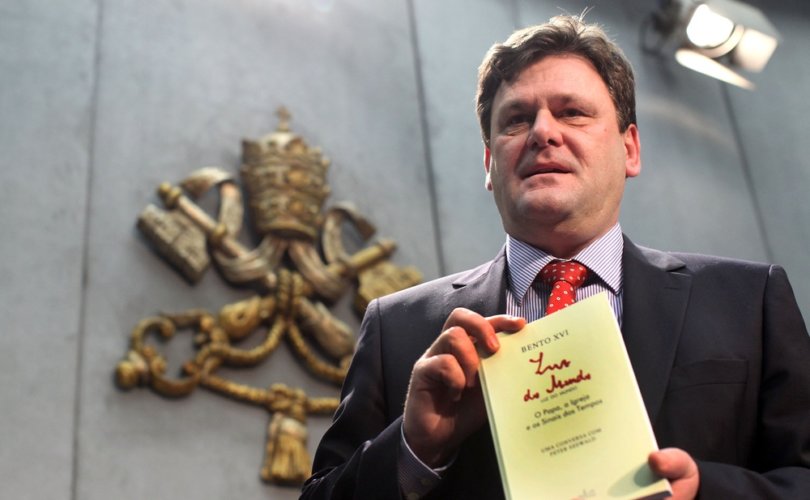 He asked rhetorically, “Man does not live by bread alone. Is not then the Eucharist, the spiritual food, at least as valuable as the things from the bakery and from the pharmacy?”

In an article published by faithful Austrian Catholic news website kath.net, Seewald first pointed out that society has by now come to a standstill.

“Too much has run its course, been pushed too far, pushed to the limit,” he wrote.

He then turned to the state of the Church, arguing that it shows “the situation of the Christian faith in a drama that must shake.”

“The churches are not closed,” Seewald wrote. “But there are no worshippers in the pews.”

“The church services are not canceled, but they are forbidden by the state. However, where is the outcry that even Confessions, adoration, and blessings are no longer possible?”

While no bishops were arrested, he said, “many of them seem to be locked away.”

Catholic faithful in the early Church, during the time of persecution, were asked why they congregated for Mass, even though the emperor had explicitly prohibited it.

Pope Benedict explained the meaning of that Latin quote during a homily in 2005: “We cannot live without joining together on Sunday to celebrate the Eucharist. We would lack the strength to face our daily problems and not to succumb.”

Seewald continued, “If this is the case, and it is the case, then it requires imagination and especially the courage to live the Christian faith even in times of need.”

“A church that shuts out even the remaining small group of upright Christians is as absurd as a bicycle without tires,” he said.

Seewald emphasized he was not encouraging anyone to violate rules of sanitary conduct. Instead, he referred to votive tablets, which can be seen everywhere in Germany and Austria, for instance at pilgrimage sites.

Whenever prayers were answered, especially during times of distress, the faithful would commission a little tablet thanking God, Our Lady, or another saint for the miracle. That tablet was then placed in a church, or by a little shrine in the countryside. While the custom of votive tablets is not as popular as it used to be, it has not died out fully.

Seewald said “it is urgent to find ways to bring the Christian faith back out of the loneliness of distance and exile; also to give comfort to people –  and a sign of hope and confidence to the world.”

In his remarks, Seewald echoes Cardinal Raymond Burke, who released a statement on the coronavirus pandemic on March 21.

“In considering what is needed to live, we must not forget that our first consideration is our relationship with God,” Burke wrote. “In combating the evil of the coronavirus, our most effective weapon is, therefore, our relationship with Christ through prayer and penance, and devotions and sacred worship.”

“We turn to Christ to deliver us from pestilence and from all harm, and He never fails to respond with pure and selfless love. That is why it is essential for us, at all times and above all in times of crisis, to have access to our churches and chapels, to the Sacraments, and to public devotions and prayers.”

Regarding the reception of the Eucharist, as well as all other sacraments, he said it should be as normal as going to a grocery store. “Just as we are able to purchase food and medicine, while taking care not to spread the coronavirus in the process, so also we must be able to pray in our churches and chapels, receive the Sacraments, and engage in acts of public prayer and devotion, so that we know God’s closeness to us and remain close to Him, fittingly calling upon His help.”

Peter Seewald conducted four book-length interviews with Pope Benedict XVI. The first two, Salt of the Earth and God and the World, were published when he was still Cardinal Joseph Ratzinger, Prefect of the Congregation for the Doctrine of the Faith.

Light of the World was released while Benedict was still the reigning Pontiff. In 2016, after he had already resigned the papacy, Last Testament came out.

A monumental biography of the Pope emeritus, written by Peter Seewald, will be released in German on May 4. The German edition has almost 1,200 pages.

The English translation will be published by Bloomsbury Continuum in two volumes, the first of which will be out on November 17.