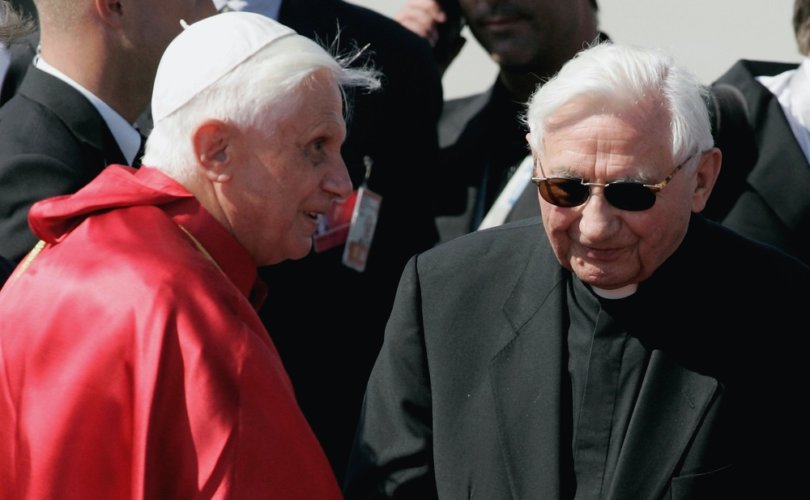 REGENSBURG, Germany, July 1, 2020 (LifeSiteNews) – Monsignor Georg Ratzinger, the brother of Pope emeritus Benedict XVI, has died at the age of 96. The former Pope visited his brother one last time just a few days ago, traveling for the first time after his resignation in 2013.

Benedict had surprised everybody by flying to Germany on June 18. Bishop Rudolf Voderholzer of Regensburg welcomed him at the airport. The Pope emeritus stayed at the seminary in Regensburg, visiting with his dying brother several times a day. He was accompanied by his private secretary Archbishop Georg Gänswein, his doctor, his caregiver, and one religious sister.

During his stay in Germany, which was supposed to be private, Benedict XVI spent the bulk of his time with his brother, but also met with the Apostolic Nuncio to Germany, Archbishop Nikola Eterović, as well as the Minister President of Bavaria Markus Söder. He traveled to the cemetery where his parents and his sister are buried.

Catholics and other bystanders lined the streets whenever the Pope emeritus moved from one place to another in Regensburg. Thus, in spite of the private nature of his visit, numerous photos and videos of the 93-year-old former Pope were taken. He traveled back to the Vatican on June 22.

Immediately after the news of Georg Ratzinger’s death, the head of the Polish Bishops’ Conference, Archbishop Stanisław Gądecki, tweeted his condolences.

“On behalf of the Polish Bishops’ Conference, I would like to express my sincere condolences on the death of Mons. Georg Ratzinger to his brother Benedict XVI, his family and loved ones as well as to the Church in Germany,” he wrote. “Eternal rest grant unto him, O Lord.”

On behalf of the Polish Bishops' Conference, I would like to express my sincere condolences on the death of Mons. Georg Ratzinger to his brother Benedict XVI, his family and loved ones as well as to the Church in Germany.

Pope Benedict and his older brother were particularly close and had planned to one day retire together in Regensburg, where the man who was to become Pope had bought a house in 1970, while he was a professor at the local university.

Benedict and his brother talked on the phone almost daily, and Georg Ratzinger frequently traveled to the Vatican to visit.

While Pope Benedict could be said to have eclipsed his brother in prominence, Georg Ratzinger was an accomplished Catholic leader in his own right. He was ordained to the priesthood in 1951, together with his brother. Having discovered his love for music already in his youth, Georg Ratzinger proceeded to study Church music in the 1950s.

In 1964, he was made head of the “Regensburger Domspatzen,” the famous cathedral choir of Regensburg. Under his direction, the choir, which consists of boys and men, traveled to North America, Asia, and many places in Europe to perform. The choir also recorded numerous important works, for instance by Johann Sebastian Bach.

Ratzinger stood out as a composer, as well, creating the Mass L’Anno Santo in the year 2000.

The older brother of Pope Benedict resigned from his position in 1994.

He was later accused of having hit some of his students during his time with the Regensburger Domspatzen. Ratzinger was not aware of any sexual abuse within the school, however, and did not engage in sexual abuse.

Ratzinger responded to the accusations, “It is simply madness, how one wants to check how many face slaps have been distributed here over a period [of] 40 years, just like in other institutions.”

Following Ratzinger’s death earlier today, Bishop Rudolf Voderholzer said, “You were a priestly confrere and advisor to me. Your music was a school of prayer, faith instruction and preaching. Countless Eucharistic celebrations in Regensburg Cathedral and in other churches owe beauty, warmth of heart and sublimity to your conducting. You transformed concert halls into houses of prayer.”