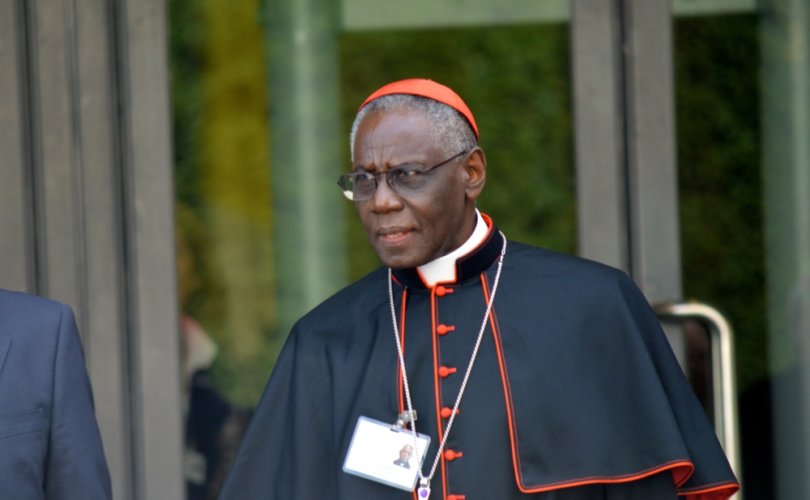 ROME, January 14, 2020 (LifeSiteNews) — As conflicting stories about the genesis of Pope Emeritus Benedict XVI and Cardinal Robert Sarah’s new book on priestly celibacy have continued to swirl on social media today, Benedict’s English publisher has weighed in with a statement insisting they will continue to list the two prelates as co-authors.

Critics of the new volume, titled From the Depths of Our Hearts: Priesthood, Celibacy, and the Crisis of the Catholic Church, took to social media claiming the book “opposed” Pope Francis, questioned Benedict’s right to express his views, suggested the Pope emeritus was “manipulated,” and accused Cardinal Sarah of showing “contempt” for married priests in the Eastern rite.

This morning Cardinal Robert Sarah, prefect of the Congregation for Divine Worship and the Discipline of the Sacraments, responded with an official statement (see full text below), in which he explained the genesis of the book.

Regarding Benedict’s knowledge and approval of the book, Cardinal Sarah wrote: “After various exchanges in view of the development of the book, on November 19, I finally sent a manuscript, the cover, a common introduction and conclusion, the text of Benedict XVI and my own text.”

The cardinal added: “On November 25, the Pope Emeritus expressed his great satisfaction with the texts written in common, and he added the following: ‘For my part, I agree that the text should be published in the form you have foreseen.’”

He also published letters from Benedict XVI that corroborate his official statement (see full texts of the letters below).

The polemic that has sought to smear me … by insinuating that Benedict XVI was not informed of the publication of the book ‘From the Depths of Our Hearts’ is deeply abject. I sincerely forgive all those who slander me or who want to oppose me to Pope Francis. My attachment to Benedict XVI remains intact and my filial obeisance to Pope Francis remains absolute.

But in comments this afternoon to the Italian news agency ANSA, Benedict XVI’s personal secretary, Archbishop Georg Gänswein, said he has “acted on instructions from the pope emeritus and asked Cardinal Robert Sarah to contact the book’s publisher and request that they remove Benedict XVI’s name as co-author of the book, and remove his signature from the introduction and conclusion.”

The German prelate acknowledged that “the pope emeritus knew that the cardinal was preparing a book and he sent him a text on the priesthood authorizing him to use it as he wished.” But contrary to Cardinal Sarah’s statement, he claimed that Benedict “did not approve a project for a co-authored book, and he had not seen or authorized the cover.”

“It is a misunderstanding that does not raise questions about Cardinal Sarah’s good faith,” Archbishop Ganswein said.

The inconsistency between Cardinal Sarah’s official statement and Archbishop Gänswein’s comments to ANSA essentially concerns whether Benedict co-authored the book, approved the entire text (including the introduction and conclusion) and saw the cover.

Following Gänswein’s statement to ANSA, Cardinal Sarah stood by his official statement, tweeting: “I confirm that I was able to speak this morning with Archbishop Georg Gänswein. This communiqué remains my one and only version of the course of events. I also had a conversation with the management of Fayard to implement the specific requests of Archbishop Gänswein.”

Ignatius Press, which is publishing the volume in Engish, has also stood by the co-authorship and cover. In a statement released this afternoon, Mark Brumley, President of Ignatius Press, said: “Ignatius Press published the text as we received it from the French publisher Fayard. Fayard is the publisher with whom we have collaborated on three other Cardinal Sarah titles. The text we received indicates the two authors are Benedict XVI and Cardinal Sarah. That text also indicates that Benedict XVI co-authored an introduction and a conclusion with Cardinal Sarah, as well as his own chapter on the priesthood, wherein he describes how his exchanges with Cardinal Sarah gave him the strength to complete what would have gone unfinished.”

Brumley continues: “Given that, according to Benedict XVI’s correspondence and Cardinal Sarah’s statement, the two men collaborated on this book for several months, that none of the essays have appeared elsewhere, and that a joint work as defined by the Chicago Manual of Style is  ‘a work prepared by two or more authors with the intention that their contribution be merged into inseparable or interdependent parts of a unitary whole’, Ignatius Press considers this a coauthored publication.”

The book is in transit to French bookshops.

Here below is an English translation of Cardinal Robert Sarah’s official statement and Benedict XVI’s letters.

Last September 5, after a visit to the monastery Mater Ecclesiae where Benedict XVI lives, I wrote to the Pope Emeritus to ask him if it was possible for him to compose a text on the Catholic priesthood, with special attention to celibacy. I explained to him that I myself had begun a reflection in prayer. I added: “I imagine that you will think that your reflections might not be opportune because of the polemics they might provoke in the media, but I am convinced that the whole Church needs this gift, which could be published at Christmas or at the beginning of the year 2020.”

On September 20, the Pope Emeritus thanked me by writing to me that he too, on his part, even before receiving my letter, had begun to write a text on this subject, but that his strength no longer allowed him to edit a theological text. However, my letter had encouraged him to resume this long work. He added that he would transmit it to me when the translation into Italian was completed.

On 12 October, during the synod of bishops on the Amazon, the Pope emeritus gave me a long text in a confidential envelope, the fruit of his work over the past months. Seeing the extent of this writing, both in substance and in form, I immediately thought that it would not be possible to propose it to a newspaper or magazine, given its volume and quality. So, I immediately proposed to the Pope Emeritus the publication of a book that would be an immense good for the Church, integrating his own text into mine. After various exchanges in view of the development of the book, on November 19, I finally sent a manuscript, the cover, a common introduction and conclusion, the text of Benedict XVI and my own text. On November 25, the Pope Emeritus expressed his great satisfaction with the texts written in common, and he added the following: “For my part, I agree that the text should be published in the form you have foreseen.”

On December 3, I went to the Mater Ecclesiae Monastery to thank the Pope Emeritus once again for placing his trust in me. I explained to him that our book would be printed during the Christmas holidays, that it would be published on Wednesday January 15, and that I would come to bring it to him at the beginning of January on my return from a trip to my native country.

The polemic that has sought to smear me for several hours now, by insinuating that Benedict XVI was not informed of the publication of the book ‘From the Depths of our Hearts’ is deeply abject. I sincerely forgive all those who slander me or who want to oppose me to Pope Francis. My attachment to Benedict XVI remains intact and my filial obeisance to Pope Francis remains absolute.

Prefect of the Congregation for Divine Worship

Thank you for your letter of September 5 and for your prayers for the priesthood in these difficult times!

Prior to your letter, I had already begun to write down some reflections on the priesthood. But in writing I always felt that my forces no longer allow me to edit a theological text.

Then your letter came with the unexpected question of a text on the priesthood, with particular attention to celibacy. So, I resumed by work and will pass on to you the text, once it is translated from German into Italian. I leave it to you [to determine] if these notes, whose insufficiency I feel strongly, can be of any use.

Following your question, I impart my apostolic blessing to you, to your collaborators, and to all your loved ones.

Prefect of the Congregation forDivine Worship

Finally, I may pass on my Thoughts on the Priesthood. I shall leave it to you if you find any use in my poor thoughts.

I greet you cordially, thankful for your service to the Holy Church.

Prefect of the Congregation for Divine Worship

With all my heart I would like to say thank you for the text added to my contribution and for all the work you have done. It touched me deeply that you understood my last intentions: I had actually written 7 pages clarifying the methodology of my text and I am truly happy to say that you were able to say the essential in half a page. So, I do not see a need to send you the 7 pages, since you have expressed the essentials in half a page.

For my part, the text can be published in the form that you have foreseen.

I am happy to see you before your departure for your homeland and to express my best wishes for your double jubilee.

Thank you also for the three volumes of your dialogue with Monsieur Diat!

In communion of prayer,