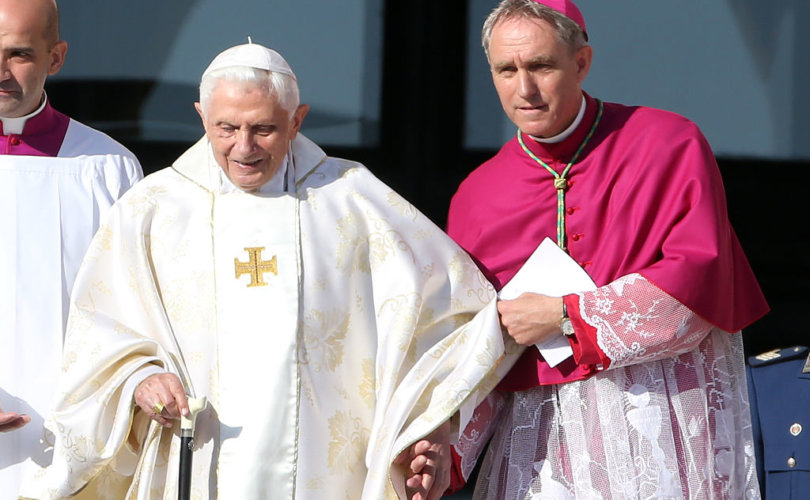 VATICAN CITY (LifeSiteNews) – Archbishop Georg Gänswein, the private secretary of Pope Benedict XVI, has criticized objections to COVID-19 shots raised by Archbishop Carlo Maria Viganò, saying that “one should appeal to the conscience” in convincing others to take the abortion-tainted injections.

Archbishop Gänswein made the comments in a recent lengthy interview he gave to Germany’s “Vatican-Magazin.”

The 65-year-old prelate, who has worked alongside Pope Benedict since the 1990s, when he was still Cardinal Joseph Ratzinger, revealed that both he and Benedict XVI had been injected “for the third time” with the COVID-19 vaccine.

He explained that they had done so “out of conviction.”

“Of course, every vaccination has advantages and disadvantages,” admitted the archbishop.

Noting anecdotally the testimony of Cardinal Gulatiero Basseti, Gänswein re-iterated the cardinal’s opposition to “any form of ideological crusade against vaccination.”

“One must not force anyone to vaccinate, that is quite clear,” said Gänswein. “But one should appeal to the conscience.”

“Does the Pope Emeritus have a similar view?” asked the interviewer.

“Otherwise he would not have had himself vaccinated three times,” affirmed Gänswein.

Responding to questions about Archbishop Viganò’s repeated criticisms of the abortion-tainted injections, Gänswein stated that he did not understand such accusations, “not at all.”

“You cannot raise the question of vaccination to the level of faith,” said Gänswein, before defending Pope Francis’s promotion of the injections. “Nor can we say that Pope Francis has launched a media campaign for vaccination. But he called for it and had himself vaccinated at an early stage. That is correct.”

Pope Francis has regularly called for COVID-19 injections, stating earlier this year that “everyone” must have one. “It must be done,” declared the Pontiff.

Pope Francis also joined a number of other cardinals in a public service announcement video in August, in which he said that they were a product of “God’s grace,” that they “bring hope,” and that receiving an injection was an “act of love.”

Despite revealing how he and Pope Benedict had taken the injections “out of conviction,” Gänswein also noted that he had “never felt real fear” during the COVID era.

Saying that while they both had “felt restrictions,” he had not experienced any real health concern except being “worried about the basic situation and how long it would last and what extent it would take.”

Gänswein has been publicly supportive of the COVID injections for some time, remarking in January 2021 that Benedict would receive the injection “as soon as the vaccine is available,” along with “the whole household of the Mater Ecclesiae Monastery” where Benedict lives.

At the time, Viganò strongly objected to Pope Francis’ January promotion of the injection. The former Papal Nuncio to the U.S. described the Pope as “the promoter of pharmaceutical companies, a convinced supporter of vaccines and a zealous cheerleader of those who for a year now have been using Covid as a means to control the masses and to impose the Great Reset desired by the World Economic Forum.”

In a paper released on December 12, 2020, Bishop Athanasius Schneider and co-signers Cardinal Janis Pujats, Bishop Joseph Strickland, and Archbishops Tomasz Peta and Jan Pawel Lenga expressed their strong conviction that any use of a vaccine tainted with the “unspeakable crime” of abortion, under any circumstances, “cannot be acceptable for Catholics.”

The prelates pointed to the contradiction between Catholic doctrine, which teaches that abortion is “a grave moral evil that cries out to heaven for vengeance,” and the commonly found view that vaccines resulting from abortion-derived material are permitted in “exceptional cases of ‘urgent need.’”