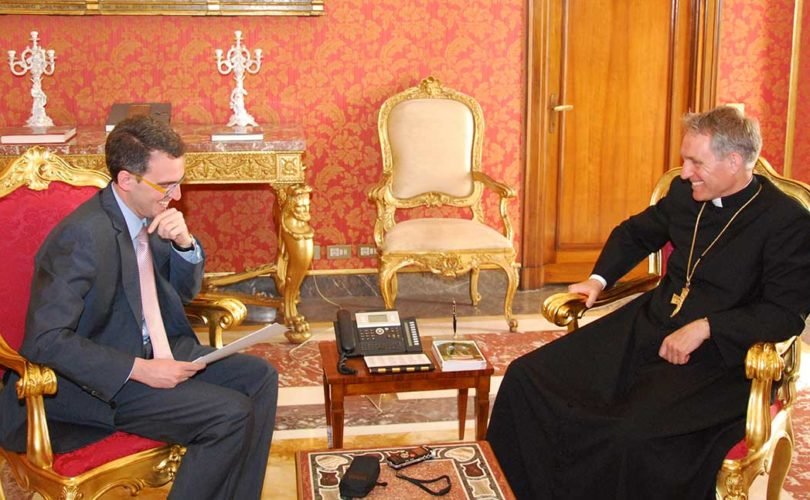 July 21, 2015 (LifeSiteNews) — Archbishop Georg Gänswein, who is both the private secretary to Pope Emeritus Benedict XVI and the Prefect of the Papal Household for Pope Francis, has granted an interview with the Spanish-language +1 news agency where he is openly critical of bishops and cardinals who are proposing Communion for remarried divorcees.

Gänswein notes that Pope John Paul II definitively settled the matter of Communion in such circumstances.  “Why do some pastors want to propose what’s not possible? I don’t know,” he said in the interview, published July 6.

As the person closest to Pope Benedict, the world looks to Archbishop Gänswein to speak the mind of Pope Benedict especially on matters where Pope Francis appears to be ambivalent.  The matter of communion is one such area where the opinion of Francis is hotly contested, but for Benedict it is clear.

“Twenty years ago, after a long and laborious negotiation, John Paul II didn’t accept that remarried Christians could accede to the Eucharist,” said Benedict’s secretary. “Now, we can’t ignore his teaching and change things.”

Speculating on why bishops, especially those in Germany, would propose such measures, he says, “Perhaps they give in to the spirit of the time; perhaps they allow themselves to be guided by the human applause caused by the media.”  While he acknowledges that being “critical against the mass media is certainly less pleasing,” he says “a pastor must not decide on the basis of applause or even less of the media.”  The measure, he says, “is the Gospel, the faith, healthy doctrine, Tradition.”

In an interview during the Extraordinary Synod on the Family last year when there was much confusion around homosexuality coming from Synod participants, Benedict’s secretary gave an interview in which he reiterated the traditional Church teaching on homosexuality.

“The Church has always declared, based on the Scriptures and tradition, that homosexual acts are intrinsically disordered,” Gänswein said at the time. The acts, he added, “are contrary to natural law, because they prevent the gift of life, the purpose of the sexual act.”

Speaking with +1’s Jaume F. Vaello, Archbishop Gänswein spoke about the confusion stemming from the last synod and continuing in to the October Synod. He encouraged the faithful with a clear understanding of the faith to speak their minds. “It is very important,” he said, that pastors and the faithful with clear ideas “express them frankly and sincerely.”