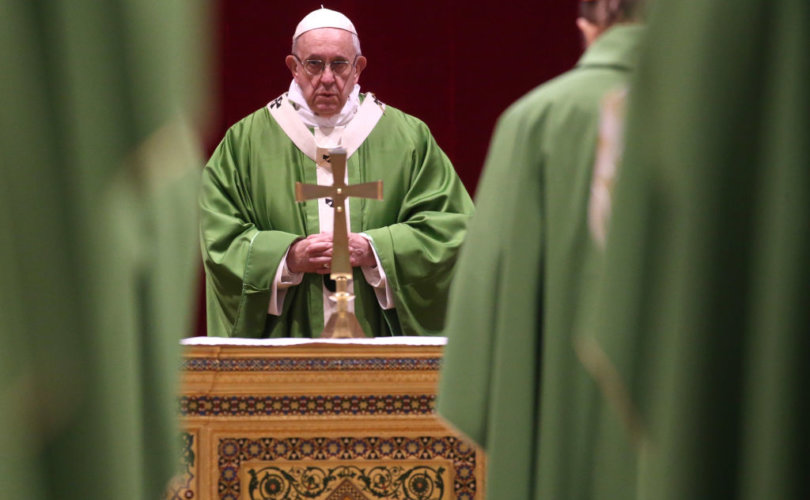 Pope Francis, flanked by cardinals and bishops, attends the closing Mass of 'The Protection Of Minors In The Church' summit at the Vatican, Feb. 24, 2019.Franco Origlia/Getty Images

ROME, February 26, 2019 (LifeSiteNews) – Pope Francis ended the landmark Vatican sex abuse summit by calling on the 190 bishops for an “all-out battle” against sexual abuse, even while he did not identify clerical homosexuality as a leading cause.

Psychiatrist Dr. Rick Fitzgibbons has pointed out, however, that “clericalism” or “abuse of power” does not “result in a psychological need in a priest for a sexual encounter with another male, especially an adolescent.”

The Pope’s failure to address homosexuality as a leading cause of sexual abuse of adults and minors mirrored responses from bishops and cardinals during press conferences that LifeSiteNews and other media received during the summit. When journalists noted on Friday that 80 percent of the sexual abuse cases involved post-pubescent males and that the word “homosexuality” was absent on the first day of the summit, Vatican investigator Archbishop Charles Scicluna responded that “to generalize about categories of persons is never legitimate.” When LifeSiteNews later asked Scicluna whether the bishops think it is important to address homosexual acts that foster coverups, he said, “You cannot not address misconduct of that nature, which is sinful,” Scicluna said, “but this is not about the sexual abuse of minors.”

An informed source told LifeSiteNews that the bishops, by limiting the meeting to minors only, “don’t in fact want to remove the causes of most of the abuse. This shows that there’s no real desire for transparency and credibility on their part.”

In his concluding remarks on Sunday for the summit, the Pope said that the Church would “spare no effort” to address sexual abuse of minors, which he compared to human sacrifice, and that it would neither cover up or underestimate the crime. Delivering his remarks at the end of Mass on Sunday that served as a coda to the summit, he said that guidelines being used by the national bishops’ conferences to prevent abuse and punish perpetrators would be revised and strengthened.

Francis had summoned representative bishops from around the world to the Feb. 21-24 meeting in Rome to ostensibly deal with the abuse crisis rocking the Catholic Church worldwide.

“Our work has made us realise once again that the gravity of the scourge of the sexual abuse of minors is, and historically has been, a widespread phenomenon in all cultures and societies,” he said. “I am reminded of the cruel religious practice, once widespread in certain cultures, of sacrificing human beings – frequently children – in pagan rites,” the Pope added.

Saying that the vast majority of sexual abuse happens among family members, the Pope presented his audience with a sweeping review of societal problems apart from the issue of clerical sexual abuse. This was to provide context for what he said was once a taboo subject. The sexual abuse of minors, he said, is even worse when it happens in the Catholic Church because, “for it is utterly incompatible with her moral authority and ethical credibility.”

The Pope said that the primary culprits of sexual abuse of minors are “parents, relatives, husbands of child brides, coaches and teachers.” Citing UNICEF data for 2017, he said that in “28 countries throughout the world, 9 out of every 10 girls who have had forced sexual relations reveal that they were victims of someone they knew or who was close to their family.”

He also spoke of pornography’s spread in online media, “causing psychological harm and damaging relations between men and women, and between adults and children.” The Pope added, “Tragically, a considerable part of pornographic production has to do with minors, who are thus gravely violated in their dignity. The studies in this field document that it is happening in ever more horrible and violent ways, even to the point of acts of abuse against minors being commissioned and viewed live over the net.”

“We need to recognise with humility and courage that we stand face-to-face with the mystery of evil, which strikes most violently against the most vulnerable, for they are an image of Jesus,” he said. “Brothers and sisters, today we find ourselves before a manifestation of brazen, aggressive and destructive evil,” the pope said.

The Pope offered eight aspects for addressing priorities in the future. He called for the Church to abandon its defensive crouch and embrace a commitment to never again engage in cover ups. The victims of abuse, he said must be the focus of the Church’s attention while priests should pursue purity “holy fear of God” guiding them. “In people’s justified anger, the church sees the reflection of the wrath of God, betrayed and insulted by these deceitful consecrated persons,” he said.

“We must keep ever before us the innocent faces of the little ones, remembering the words of the Master: “Whoever causes one of these little ones who believe in me to sin, it would be better for him to have a great millstone fastened around his neck and to be drowned in the depth of the sea. Woe to the world because of scandals! For it is necessary that scandals come, but woe to the man by whom the scandal comes! (Mt 18:6-7).”

As for addressing the problem of errant clergy, Pope Francis called for a “constantly renewed commitment to the holiness of pastors, whose conformity to Christ the Good Shepherd is a right of the People of God.” Formation of clergy, he said, means “requiring criteria for the selection and training of candidates to the priesthood that are not simply negative, concerned above all with excluding problematic personalities, but also positive, providing a balanced process of formation for suitable candidates, fostering holiness and the virtue of chastity.”

“Saint Paul VI, in his encyclical Sacerdotalis Caelibatus, wrote that “the life of the celibate priest, which engages the whole man so totally and so sensitively, excludes those of insufficient physical, psychic and moral qualifications…”

Referring to sexual abuse, “The brutality of this worldwide phenomenon becomes all the more grave and scandalous in the Church, for it is utterly incompatible with her moral authority and ethical credibility. Consecrated persons, chosen by God to guide souls to salvation, let themselves be dominated by their human frailty or sickness and thus become tools of Satan.”

“No explanations suffice for these abuses involving children,” he said, adding: “We need to recognize with humility and courage that we stand face to face with the mystery of evil, which strikes most violently against the most vulnerable, for they are an image of Jesus.” The Pope said, “the Church has now become increasingly aware of the need not only to curb the gravest cases of abuse by disciplinary measures and civil and canonical processes, but also to decisively confront the phenomenon both inside and outside the Church.”

“She feels called to combat this evil that strikes at the very heart of her mission, which is to preach the Gospel to the little ones and to protect them from ravenous wolves,” the Pope said.

The Pope expressed his “thanks to all those priests and consecrated persons who serve the Lord faithfully and totally, and who feel themselves dishonored and discredited by the shameful conduct of some of their confreres.”

“All of us – the Church, consecrated persons, the People of God, and even God himself – bear the effects of their infidelity,” he said, adding: “In the name of the whole Church, I thank the vast majority of priests who are not only faithful to their celibacy, but spend themselves in a ministry today made even more difficult by the scandals of few (but always too many) of their confreres.”