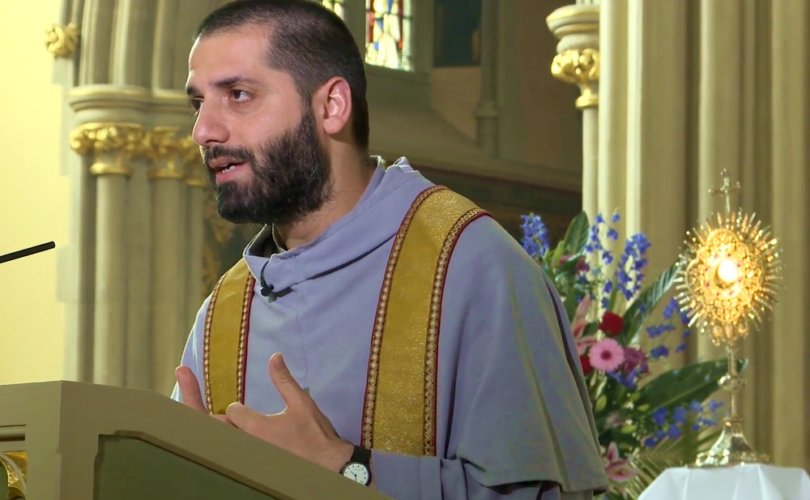 May 21, 2020 (LifeSiteNews) — Pope Francis describing requests to declare Our Lady Co-redemptrix as “nonsense” is a reflection of his “personal taste” and not a statement on the validity of the doctrine, a Franciscan theologian told the Rome Life Forum yesterday.

Fr. Serafino Lanzetta delved into the six-month-old controversy during an question-and-answer session on the first day of the seventh annual forum, which was moved online because of the coronavirus pandemic, and is on the theme “Coronavirus in the Light of Fatima: a tragedy and a source of hope.”

The question referred to the pope’s December 12, 2019, homily in which he said Mary “never wanted to take anything from her Son. She never presented herself as Co-redemptrix,” and added, “When they come to us with stories saying we have to declare this, or make this or that other dogma, let us not get lost in nonsense.”

“We cannot dismiss the word ‘Co-redemptrix’ … only because Pope Francis said we don’t need it,” said Lanzetta, a Marian Franciscan from the diocese of Portsmouth in the United Kingdom.

Lanzetta contends that the doctrine that Mary made a unique contribution to our salvation as Co-redemptrix is part of the ordinary magisterium of the Church, and has been reiterated by many popes for the last 100 years.

“A single pope can never say something contrasting such a long reiteration, magisterial reiteration. I would say Pope Francis maybe said that because of more a personal taste,” he said.

“But the doctrine of the faith … is not the object of personal taste, it is what God has revealed, what the Church has received.”

Lanzetta was also asked what most hinders the triumph of the Immaculate Heart of Mary.

Our Lady promised her Immaculate Heart would triumph “regardless of human events,” so this “triumph is connected directly with God’s will” and will take place even despite today’s minimal response to her message at Fatima, he replied.

But certain events, such as the “loss of faith,” will take place before this triumph, he said.

These events were to some extent foretold by Our Lady when she appeared to the three children at Fatima, said Lanzetta, adding that there is “something missing, something lacking” between the second and third parts of the secret she gave to them.

The second part of the secret ends with the words: “In Portugal, the dogma of the faith will be kept.” The third part of the secret describes the “desolate scenario” of a city on a hill, half in ruins and strewn with corpses, through which walks a man in white.

“This is the situation within the Church. We are affected unfortunately by a tremendous loss of faith,” said Lanzetta.

Sr. Lucia also mentioned in her diary that there will be chastisements before the triumph of Mary’s Immaculate Heart, he added.

Pandemics, pestilence, illness, social problems are “always permitted by God’s providence in order to purify us from all our sins, to teach us how to be obedient to His will.”

Cardinal Raymond Burke, also part of the Q&A, agreed that the coronavirus pandemic is a chastisement and “the fruit of the disorder we have introduced into this world by sin.”

“If we don’t repent, I don’t see how God can stay His hand from us who would be so rebellious against Him, and against His great love for us,” added Burke.

“All it requires from us is the opening to His merciful grace, and He will not fail to provide us with graces in abundance to transform ourselves and to transform the world.”

The coronavirus crisis has also made clear the urgent need “to define clearly the relationship between the Church and the state,” said Burke, noting he has heard personally and on social media from Catholics denied access to the sacraments.

“The Church needs to see her sacred duty to provide the sacraments to the faithful at all times.”

He did not have the answer to the question why popes so far have not consecrated Russia to Mary’s Immaculate Heart as she requested, Burke said.

“The point is that Our Lady’s request stands, and it is more timely than ever because the great evil of atheistic materialism, of communism, which began in Russia, spreads now in a very dramatic way, especially through the influence of the government of China,” observed the cardinal.

“So we must pray for our Holy Father that he will fulfill the request of Our Lady.”

All the bishops in the world in their dioceses must unite with the Holy Father in making the consecration, he said.

Asked what is the first step families can take to reform their lives according to Our Lady of Fatima’s call, Fr. Lanzetta said they should pray the rosary together.

“The more we pray the rosary, the more we appreciate how beautiful it is to be in communion with Our Lady, because we pray these Hail Marys in a way to echo the words of the angel to bring this great news of the Incarnation of God,” he said.

The rosary “is also very, very important to keep the true faith.”

St. Louis de Montfort said that “heretics normally don’t pray the Hail Mary,” and in refusing to do so, “in fact they refuse to acknowledge, to profess the very first mystery of our faith, the Incarnation of the Word.”

A daily rosary is “also a bit penitential because we have to be faithful to this commitment every day” and “be strong enough to keep going on despite possible distractions,” Lanzetta said.

Families should also read True Devotion to Our Lady by St. Louis de Montfort. It includes a consecration to Mary, which “is the best way to live out those vows that we took in the moment of our baptism.”

To watch the video of the Q&A, go here.