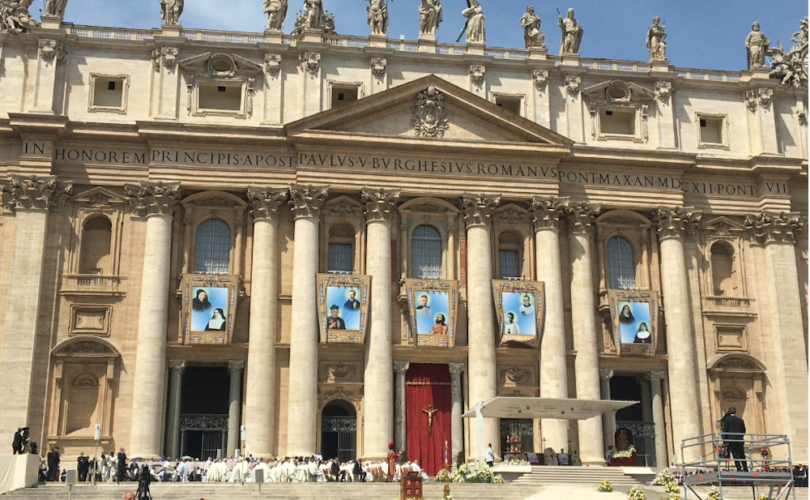 Help Sr. Miriam care for the poor in a Kenyan slum: LifeFunder

VATICAN CITY (LifeSiteNews) – On Sunday May 15, ten new saints were elevated to the honors of the altar in Rome at St. Peter’s by Pope Francis, including the French Trappist missionary to Algeria Fr. Charles de Foucauld and the Dutch Carmelite journalist martyr Fr. Titus Brandsma.

Crowds of an estimated 45,000 pilgrims from all over the world filled St. Peter’s Square Sunday morning for the canonization and extended down the Via della Conciliazione leading to St. Peter’s Basilica from the Tiber River. The newly canonized included 3 martyrs: two priests, Charles de Foucauld and Titus Brandsma, and a layman, Lazzarus Devasahayam. There were seven founders of religious congregations: three priests, César de Bus, Luigi Maria Palazzolo, and Giustino Maria Russolillo; and four sisters, Maria Rivier, Maria Francesca of Jesus Rubatto, Maria of Jesus Santocanale, and Maria Domenica Mantovani.

The canonization Mass began with the invocation of the Holy Spirit though the chanting of the ancient hymn Veni Creator. After imploring the intercession of heaven though the Litany of Saints, the prefect for the Congregation of the Causes of Saints spoke the formal petition asking the Pope to enroll the blesseds among the saints.

Most Holy Father, Holy Church, trusting in the Lord’s promise to send upon her the Spirit of Truth, who in every age keeps the supreme Magisterium immune from error, most earnestly beseeches Your Holiness to enroll these, her elect, among the Saints.

In response, the Holy Father pronounced the decree of canonization in Latin using the formula for the definition of doctrine pertaining to faith or morals:

For the honor of the Blessed Trinity, the exaltation of the Catholic faith and the increase of the Christian life, by the authority of our Lord Jesus Christ, and of the holy Apostles Peter and Paul, and our own, after due deliberation and frequent prayer for divine assistance, and having sought the counsel of many of our brother bishops, we declare and define Blessed __________ be a saint and we enroll them among the saints, decreeing that they are to be venerated as such by the whole Church. In the name of the Holy Father, and of the Son, and of the Holy Spirit.

At the naming of each of the new saints, the pilgrims especially devoted to that saint erupted in cheers from the piazza.

Among those canonized was the Dutch Carmelite philosopher and journalist who was martyred in Dachau during the Second World War. Titus Brandsma, Carmelite, priest, university rector, and journalist, bolstered the Dutch resistance to the Nazi takeover of the Netherlands by refusing to instruct the Catholic journalists of the country to publish Nazi propaganda when ordered to do so by Berlin. Instead, toward the end of 1941, Brandsma sent a circular letter to Catholic journalists encouraging a united front against Hitler’s regime and its attacks on the faith. Admitting the possibility of dire consequences, he told the journalists that their readers deserved to know they were reading an authentically Catholic paper. Brandsma followed the letter with a visit in person to every editor. All agreed to uphold the faith and resist the Nazis.

The resilience of the Catholic press in the Netherlands drew the attention of Berlin. After close surveillance, Brandsma was arrested on January 19. When under interrogation, Brandsma used the occasion to attempt to convert his captors. When asked why Dutch Catholics opposed Nazism, he produced a long essay in which he argued from philosophy and history that National Socialism was contrary to human culture, truth, and religion, was based on Neo-Hegelian principles that were opposed to the beauty and dignity of man, and that it lacked the support of ordinary citizens and was doomed to failure.

Eventually Brandsma was transferred to Dachau on June 13, 1942. He showed kindness to everyone he met in spite of incredible sufferings. Due to the failing health of his already weakened body, he was taken to the camp hospital. As his last act, he gave away his rosary to the nurse who killed him by lethal injection. The woman later returned to the faith, grateful that God had allowed her to have known the saint.

In an interview with Vatican News, the Ambassador of the Netherlands to the Holy See, Caroline Weijers, highlighted the many-faceted roles of the Carmelite journalist martyr, calling him “a special resistance hero” of his day.

“As a priest,” Weijers said, “he was inspired by Teresa of Avila, Carmelite and Saint. He had an extremely positive attitude to life. As a thinker, philosopher, and mystic, he made an intellectual contribution to the social debate. As professor at and Rector Magnificus of the Catholic University of Nijmegen, which was founded in 1923, he contributed to Catholic emancipation in the Netherlands. As a journalist, he was active in word and certainly in action, speaking out against national socialist ideology and the Nuremberg racial laws, defending freedom of the press, and during the occupation of the Netherlands visiting Catholic newspapers to urge them not to print propaganda. All these aspects made him, certainly when we look back, a special resistance hero. His courage and perseverance are inspiring for many worldwide.”

Help Sr. Miriam care for the poor in a Kenyan slum: LifeFunder