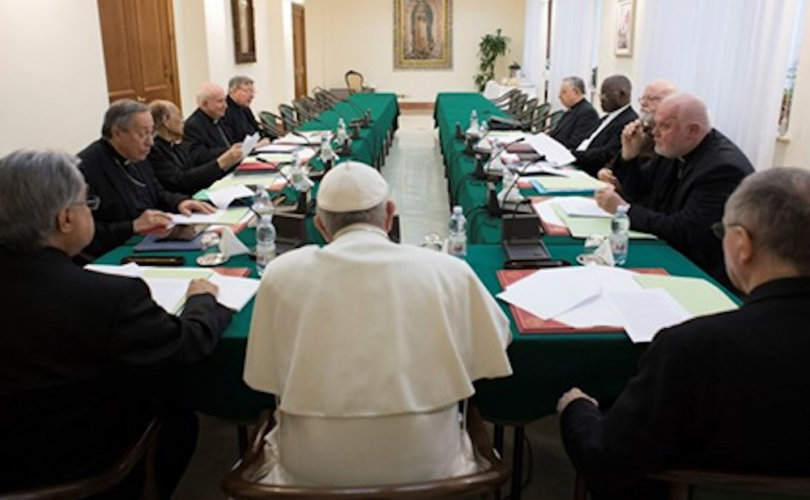 This was the 20th meeting of the Council of Cardinals, the group of nine Cardinals that Pope Francis has established to work with him on Curial reform.

The call for decentralization, or devolution of power, including “genuine doctrinal authority,” had been a demand made at the controversial 2015 Synod by individuals who also reject Catholic teaching on human sexuality.

The “healthy decentralization” concept, along with the terms “spirit of episcopal collegiality” and “synodality,” have been bandied about since the 2015 Synod on the Family. These were ushered in with the advent of the current “pastoral process of accompaniment,” also floated at the Synod, and which has ultimately opened the door for Communion for divorced and remarried Catholics.

Among the proposals considered by the Council of Cardinals this week was the possibility of transferring some functions from the Roman dicasteries to the local bishops or episcopal councils, Vatican radio reported, “in a spirit of healthy decentralization.”

Permanent deacons are currently a different category from transitional deacons who are on the path to priesthood. And deacons in either case are not allowed to marry or remarry or widowed once they are ordained.

The cardinals’ discussion this week covered new bishop appointments — specifically drawing outside the normal consulting pool of priests and bishops, to also use religious and laity. They also discussed situations where decisions currently made by Vatican congregations might be delegated to diocesan bishops or their conferences.

Their overall work has encompassed a study of all Vatican offices, with this meeting concerning the Congregation for Evangelization of Peoples. The cardinals also considered draft documents on the work of Vatican tribunals and offices for the Oriental Churches, the Interpretation of Legislative Texts, and Inter-Religious Dialogue. And they considered documents on three tribunals: the Apostolic Penitentiary, the Apostolic Signatura, and the Roman Rota.

When those documents are finished, they will be submitted to the pope for his final decision on any changes to be made in the respective offices.

Vatican spokesman Greg Burke referred in a press briefing to Vatican offices as dicasteries, CatholicCulture.org reported. Burke made no distinction between the bodies currently classified as congregations and those that are pontifical councils.

This terminology, the report said, along with the fact that two important new offices have been identified only as dicasteries, could be interpreted as a signal that some offices will be reclassified in a full restructuring of the Curia.

Australian Cardinal George Pell gave an update to the Council on the work of the Secretariat for the Economy, for which he is president.

The Council of Cardinals made the unprecedented move of making a statement allegiance to the Pope in February amid the growing concern over Amoris Laetitia and consternation from the pope’s lack of response to the dubia submitted regarding his document.

Even outside concerns voiced over Amoris Laetitia and Pope Francis’ silence in response to the dubia — two very public expressions of dissatisfaction of his pontificate that had taken place just before the Council’s February allegiance pledge.

A campaign had dozens of large posters plastered around Rome that noted the pope’s dismantling of congregations, removing priests, and more. Sporting a dour-faced Francis, the posters queried, “Where is your mercy?”

The other expression of discontent came from a satirical version of the Vatican newspaper L’Osservatore Romano having the Pope answering the dubia with ‘yes and no’ to each question, denoting the pope’s tendency toward ambiguity in communicating.

Council of Cardinals members met with the pope Monday through Wednesday of this week. All members were present except Boston Cardinal Sean O’Malley. Pope Francis was absent Wednesday morning because of his regular General Audience.

Their next meeting is scheduled for September.