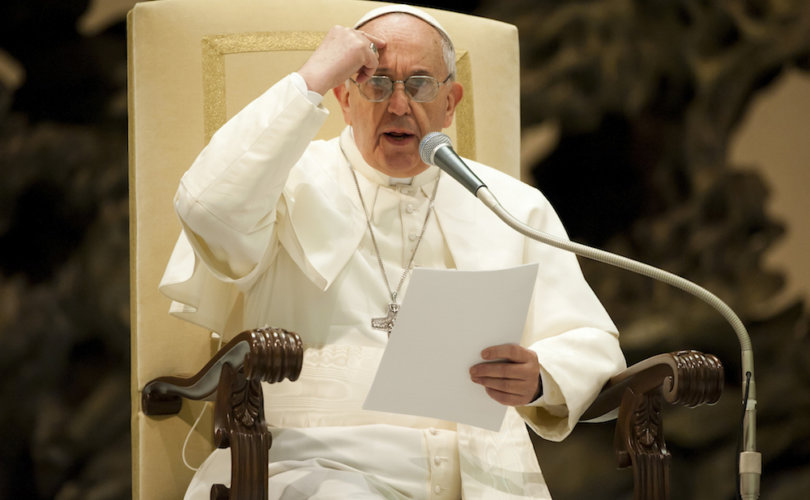 ROME, October 19, 2018 (LifeSiteNews) – Derogatory language is the latest cultural ill to make the subject of a lecture by Pope Francis, a man with his own history of colorful terminology for all manner of purported bad actors.

During weekly remarks Wednesday in St. Peter's Square, Breitbart reports that Francis lamented that the habit of insulting people has become as persistent as breathing.

Insulting others “is a way of killing a person’s dignity,” the pope declared. “It would be wonderful if this teaching of Jesus entered our minds and hearts, and each of us would say: ‘I will never insult anyone.’”

He cited passages in Matthew and John in which Jesus teaches that anyone who says “you fool” will be “liable to the hell of fire,” and that “All who hate a brother or sister are murderers.”

“Think of the gravity of insults, of contempt, of hatred. Jesus compares them to killing,” Francis observed,” noting that man “possesses a hidden ‘I’ that is no less important than his physical being.”

“To annihilate a man, just ignore him. Indifference kills,” he argued. “It is like saying to the other person: ‘You are dead to me,’ because you have killed him in your heart.”

While it is true that Christ taught compassion and humility in all things including language, He also deployed forceful, “insulting” language on occasion to identify sin, from “you brood of vipers!” to “O faithless and perverse generation!”

Francis himself is no stranger to insults, so much so that in 2013 Catholic blogger Laurence English released “The Pope Francis Little Book of Insults,” an online collection of various epithets the Holy Father has fired at various targets over the years.

“Mr. and Mrs. Whiner,” “superficial Christian,” “sloth-diseased,” “climbers…attached to money,” “pretender,” and “cursed, criminal” “men who work war” “fomenter of coprophagia!” are just some of the examples in the lengthy, fully-sourced document.

One of the Pope's all-time favorites is to denounce Catholics who love the traditions of their faith as “rigid.”

Others include “pepper-faced,” “liquid,” and “weak-hoped” Christians; “museum mummies” and “old maids”; and priests and seminarians who qualify as “vain,” “wheeler-dealers,” “little monsters,” and “smarmy idolaters.”

Francis’ “strength is communicating parts of the Catholic faith in a simple, direct and visible way,” but “bluntness is a double-edged sword, and some of his speeches and sermons have offended some of the papacy's biggest supporters,” English wrote in a 2014 CNN piece explaining why he compiled the Little Book. “In sifting through media reports, I was shocked by how often the Pope criticized Christians and by the severity of his insults.”

“The Pope didn't say these things just to insult people, of course. Rather, he was often making a larger point about the kind of church he wants to lead: open, merciful and unafraid,” English conceded. “But at the same time, some Catholics have felt alienated by Francis’s criticisms, as if they are under attack. In blasting the status quo, it can sometimes seem as if the Pope is slighting the most faithful members of the church.”