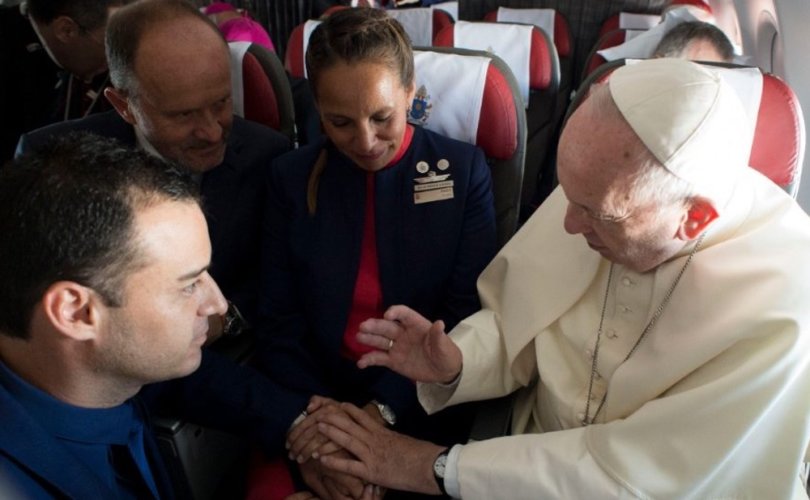 January 18, 2018 (LifeSiteNews.com) – Pope Francis conducted a spontaneous marriage ceremony for a Catholic couple living in a civil, non-sacramental marriage during a flight in Chile today.

The Chilean couple, Carlos Ciuffardi and Paula Podest Ruiz, are flight attendants who say that the pope proposed the idea to them while they sat and chatted with him after a group photo with the plane’s crew.

“When the time came for the group photo of all flight crew with the pope, he invited us to sit down [next to him],” said Ciuffardi to the press afterwards in a video interview. “He asked us…”

Podest Ruiz interrupted, “We began to converse with him…”

“And that would be the moment. It was like that!” added Ciuffardi, snapping his fingers to illustrate how quickly it happened. “It occurred to him [to do it]!”

“I don’t know if someone had said something to him [about it] because . . . we don’t know,” said Ciuffardi.

The Italian newspaper La Stampa also reports that Ciuffardi said, “Before declaring us husband and wife, the Pope asked me, with a smile, but are you truly sure?”

The couple’s account seems to contradict the director of the Holy See’s press office, Greg Burke, who told the press that  “it was not the pope’s idea. It was their idea, but the pope was happy to do it.”

Burke also seemed concerned to defend the sacramental validity of the marriage, but misstated Catholic doctrine and law in order to do so.

“Doctrinally it’s ok because to be married the ministers are the people themselves, you just need a witness. There are a couple of other things, normally there are publications, and there are things that have to be passed over. But it’s perfectly legit and everyone’s happy,” said Burke.

Pope Francis performed on Thursday the first-ever papal marriage ceremony aboard the plane bound for Iquique, the final day of his Apostolic Visit to Chile!
Greg Burke, Director of the Holy See Press Office, said the marriage was “totally legit” and “doctrinally OK”. pic.twitter.com/F9KKzE4Omr

American Canon Lawyer Ed Peters raised concern that the marriage was contrary to canonical form and may not be valid.

“Based on the reports…I cannot tell whether the ‘wedding’ that the pope put together for an unsuspecting couple satisfies Church requirements on marriage, and several other laws impacting the liceity of marriage seem simply to have been disregarded in the event,” he wrote.

“As happened several times under earlier administrations, a representative from the Vatican Press Office assures us that 'everything was valid.' Such assertions by canonically unqualified and unauthorized PR staff carry, of course, no weight. Real questions worthy of real answers are still raised by this event,” he added.

Peters said that “canonical form is still law for Catholics and that law goes to the validity of Catholic marriage.”

The pope had an assistant write the following text on a piece of paper: “On the 18th of January 2018, during the papal flight on the journey from Santiago to Iquique, Mr. Carlos Ciuffardi and Mrs. Apaula Podest have contracted marriage in the presence of the witness Ignacio Cueto. The Holy Father Pope Francis is the one who has received their consent.” The document is signed by the pope, Cueto, two other witnesses, and the couple.

Ciuffardi also told the media that the pope said to the couple, “Marriage is the sacrament that the world is lacking. Let’s hope that what you have done will be an inspiration to other couples. That’s why I’m doing this.” He also reportedly gave the couple two rosaries as gifts.

The couple has reportedly been living in a merely civil marriage for years and have two children. They claim not to have had a Catholic wedding because the church in which the ceremony would have taken place was damaged in the 2010 earthquake that struck the Santiago area.

Pope Francis’ controversial apostolic exhortation Amoris laetitia repeatedly discusses the need for “long term and short term marriage preparation” before couples enter into the sacrament of marriage, which is a lifelong and unbreakable bond — advice that seems to contradict his decision to spontaneously marry two people of whom he has no prior knowledge.

“Another great challenge of marriage preparation is to help couples realize that marriage is not something that happens once for all. Their union is real and irrevocable, confirmed and consecrated by the sacrament of matrimony. Yet in joining their lives, the spouses assume an active and creative role in a lifelong project,” writes Francis in Amoris laetitia.

Pope Francis has expressed skepticism about the validity of most Catholic marriages, regarding them as merely “provisional.”

Speaking of a “culture of the provisional” on a flight in 2016, the pope said, “It’s provisional, and because of this the great majority of our sacramental marriages are null.”

Ordinarily parishes require advance notice for marriage ceremonies in order to verify baptismal certificates and to ensure that there are no impediments, such as a previous marriage.

The pope was in Chile for a three-day visit, and is now heading for Peru, which will be the last stop in his six-day visit to South America.