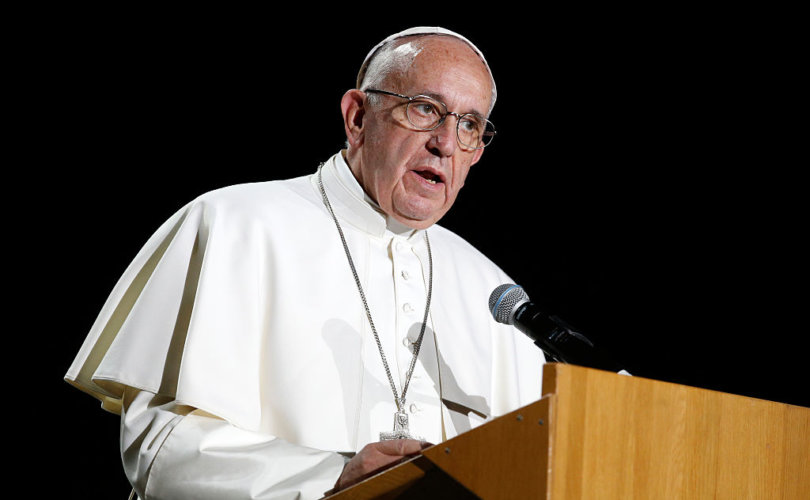 VATICAN CITY (LifeSiteNews) – Pope Francis released a message Thursday for the upcoming “World Day of Prayer for the Care of Creation,” warning that the planet is “reaching ‘a breaking point’” while describing the prayer event as “an opportunity to cultivate our ecological conversion.”

Notably, the Pope’s message also included a call for the implementation of the pro-abortion, pro-contraception Paris Climate Agreement as he defended his authorisation of the Vatican’s recent joining of the Agreement.

‘Mother Earth’ is issuing a ‘chorus of cries’

Published Thursday, Francis’ message centers on listening to “the voice of creation,” which he said has turned from a “sweet song in praise of our beloved Creator” to “an anguished plea, lamenting our mistreatment of this our common home.”

Describing the international prayer event, which runs from September 1 to October 4 (concluding on the feast of St. Francis of Assisi), the Pontiff said it is “a special time for all Christians to pray and work together to care for our common home,” placing heavy emphasis on the painful “chorus of cries” exclaimed by “our sister, mother earth.”

“Prey to our consumerist excesses, she [‘mother earth’] weeps and implores us to put an end to our abuses and to her destruction,” Francis lamented, personifying the created world in paganistic terms. He also mourned an apparent “tyrannical anthropocentrism” – quoting from his own 2015 ecology-centred encyclical Laudato si’ – by which “predatory economic interests” and the supposed invasion of ancestral lands have wrought the “climate crisis.”

“Listening to these anguished cries, we must repent and modify our lifestyles and destructive systems,” the Pope exhorted, imploring Catholics as “persons of faith” to “the ecological conversion needed to bring about lasting change,” again quoting himself.

The Pope’s message follows comments delivered on July 6, wherein he warned of the “urgent need to reduce the consumption not only of fossil fuels but also of so many superfluous things,” encouraging young people to eat less meat to “help save the environment.”

In comments to LifeSiteNews, British catechist and author Deacon Nick Donnelly said that the Pope’s creation message “promotes a distorted spirituality that focuses on the physical world, instead of being focused on the mystery of God, who ‘inhabiteth light inaccessible, whom no man hath seen, nor can see: to whom be honour and empire everlasting.’ (I Tim 6:16).”

“Such a creation-centred spirituality is dangerous,” he explained, “because it so easily slips into paganism and shamanistic rituals, which we witnessed in Pope Francis’ scandalous participation in the veneration of the pagan idol Pachamama.”

Also speaking to LifeSiteNews, theologian Dr. Peter Kwasniewski argued that the Pope’s message confounds the glory of God found in His creation with a kind of personification thereof, explaining that, from a theological standpoint, “it does not make any sense to talk about a ‘voice of creation’ per se.”

“There is the voice of the Creator who tells us His intentions in creating; and there are the truths we can glean from our study and contemplation of natural things, whereby we come to know more about their natures,” Kwasniewski stated. “They are not, however, persons with voices, nor is the entire globe or cosmos a person with a voice.”

Continuing, Kwasniewski said that while “this kind of poetic metaphorical language can at times be justified,” it is “highly misleading in such a document, especially in an age of extreme environmentalisms that denigrate what is proper to the human person, even going so far as to justify contraception and abortion in the name of keeping the population down for the benefit of the earth.”

Later in his message, the Pope turned his attention to his recent formal authorization of the Vatican to join the Paris Climate Agreement, an international contract purportedly aimed at reducing global average temperatures, but which includes as part of its goals the expansion of abortion and contraception, among other population control measures.

Despite the myriad anti-Catholic principles of the Agreement, Francis said that the forthcoming COP27 summit on climate change in Egypt “represents the next opportunity for all to join in promoting the effective implementation of the Paris Agreement.”

“It is necessary for all of us to act decisively. For we are reaching “a breaking point,’” Francis claimed.

Indeed, the Holy Father defended his signing of the Agreement as the Holy See “having generously shouldered its grave responsibilities” regarding the “care of creation.” He suggested that “a covenant between human beings and the environment” should underpin the pro-abortion Agreement.

The text of the Agreement also pays lip service to issues relating to “human rights, the right to health, the rights of indigenous peoples, local communities, migrants, children, persons with disabilities and people in vulnerable situations” together with its climate agenda.

In addition, one of the Sustainable Development Goals sets out to “achieve gender equality and empower all women and girls,” including the following target, to be achieved by 2030: “ensure universal access to sexual and reproductive health and reproductive rights.”

In response, Kwasniewski told LifeSite that “a single human person is worth more, metaphysically, than the entire planet of inanimate and sub-rational beings, because he or she bears a specific likeness to God – and has a voice! – whereas they bear only traces of Him.”

“The conversion that is necessary in our time,” he added, “is a turning to the one true God, Lord of heaven and earth, to heed His voice.”