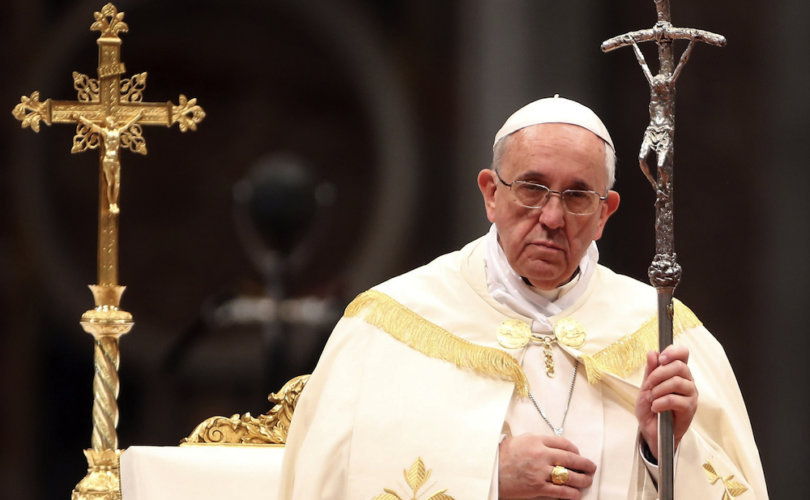 On Saturday, October 13, the Vatican released a detailed statement saying that the Holy Father had dismissed Francisco José Cox Huneeus, 84, an Archbishop Emeritus of La Serena, and Marco Antonio Órdenes Fernández, 53, Bishop Emeritus of Iquique, from the priesthood.

The Vatican statement said that “the decision adopted by the Pope on Thursday, October 11, 2018, is not subject to appeal.” It followed a meeting between the pontiff and the Chilean president, Sebastián Piñera.

Cox has been accused of abuse by about a dozen people over several decades.  A member of the Schonstatt Fathers, Cox retired to Vallendar, Germany, where his order has its headquarters, after he was diagnosed with cancer in 2012.  A Chilean television crew attempted to interview him there about the allegations but he refused to discuss them. According to the UK’s Catholic Herald, there are reports Cox is suffering from dementia.

The Vatican statement said that Cox will remain a member of the Institute of Schoenstatt Fathers.

Ordenes was accused of sexual abuse in 2009 by a man who said that he had been 15 when his ordeal began. When the story reached the Chilean media in 2012, Ordenes admitted that he had had a “reckless” relationship with his accuser but denied that the man had been a minor when it began.

The Vatican’s announcements of the former bishops’ laicization immediately followed a meeting between the pontiff and the Chilean president, Sebastián Piñera Echenique, on Saturday. The president next met with the Secretary of State, Cardinal Piero Parolin.

The Vatican also released a statement that, among other topics, the Holy See and President Piñera had discussed “the defence of life and the painful scourge of abuse of minors, reiterating the effort of all in collaboration to combat and prevent the perpetration of such crimes and their concealment.”

After his meetings, President Piñera told media that he and Pope Francis  “shared the hope that the Church may experience a renaissance and recuperate the affection, the closeness of the people of God and can continue playing the important role that the Church plays in our country.”

Pope Francis has also recently removed two Chilean priests accused of sexually abusing minors from the clerical state: Cristián Precht, who had been considered a hero for his defense of human rights during Chile’s military dictatorship in the 1970s and 1980s, and Fernando Karadima. Both Precht and Karadima deny the allegations.

“Episcopal consecration is part of the Sacrament of Holy Orders, and the difference between priests and bishops, and deacons, is paralleled by a distinct ‘character’ (mark) on the soul in each case,” Shaw said.

“This cannot be erased, and priests and bishops cannot strictly speaking be ‘laicised’: they can only be forbidden to exercise their sacred functions and released from the obligations of the clerical state, such as celibacy,” he continued.

“They will take their clerical and episcopal nature into the afterlife, even into Hell: ‘for their greater shame and punishment’, as the Baltimore Catechism expresses it (611).”

Removing two bishops from the priesthood is an unprecedented move from Francis, who was originally slow to move on the problem of clerical sex abuse and episcopal cover up in Chile.

In January 2018, there were an explosion of protests following the Pope’s support of Bishop Juan Barros, who was accused of complicity in sexual abuse in Chile. When asked by reporters about the Barros case, the pontiff shocked the Latin American country by saying,  “The day that they bring me proof against Bishop Barros, then I will speak. There isn’t a single piece of proof against him. It’s all calumny. Is that clear?”

During a press conference on the return flight to Rome on January 21, Pope Francis partially apologized for denying the evidence provided by the testimony of victims but claimed that he had not received any such testimony from them himself. He repeated that such unsupported accusations are “slander.”

“Slander, yes, when one says pertinaciously, without evidence, that you have done this, that this person has done this, this is slander … ” said Francis.

“But it is the victims who say it,” a reporter responded.

“I did not hear from any Barros victims,” Francis replied.

“There are victims of Karadima (the priest accused of the abuse) who say that Barros was there,” the reporter said.

“They did not come, they did not give the evidence for the trial. This is a bit vague, it's something that can’t be taken up,” said Francis, adding, “You, with good will, tell me there are some victims, but I have not seen them because they did not present themselves.”

Francis subsequently offered an apology to the bishops of Chile regarding his attitude towards sex abuse accusations made against Barros.

Following an investigation on the part of the Vatican that involved interviewing a total of 64 sex abuse victims in Chile and New York regarding Chilean bishop Juan Barros, Francis admitted that he had committed “grave errors” with regard to the case.

“Regarding me, I recognize and I wish that you convey [to others], that I have fallen into grave errors of evaluation and perception of the situation, due especially to a lack of true and balanced information,” Francis wrote in a letter to the bishops of Chile signed on April 8 and subsequently published by the Vatican.

“I now ask for the forgiveness of all of those whom I offended and I hope to do so personally in the coming weeks, in meetings that I will have with the people who have been interviewed,” he added.

In May 2018, after Francis met the Chilean bishops to discuss clerical sexual abuse, all of Chile’s bishops offered their resignations en masse.

Chilean prosecutors are currently investigating 126 Catholic clergy or members of religious orders accused of sexually preying on minors and adults.